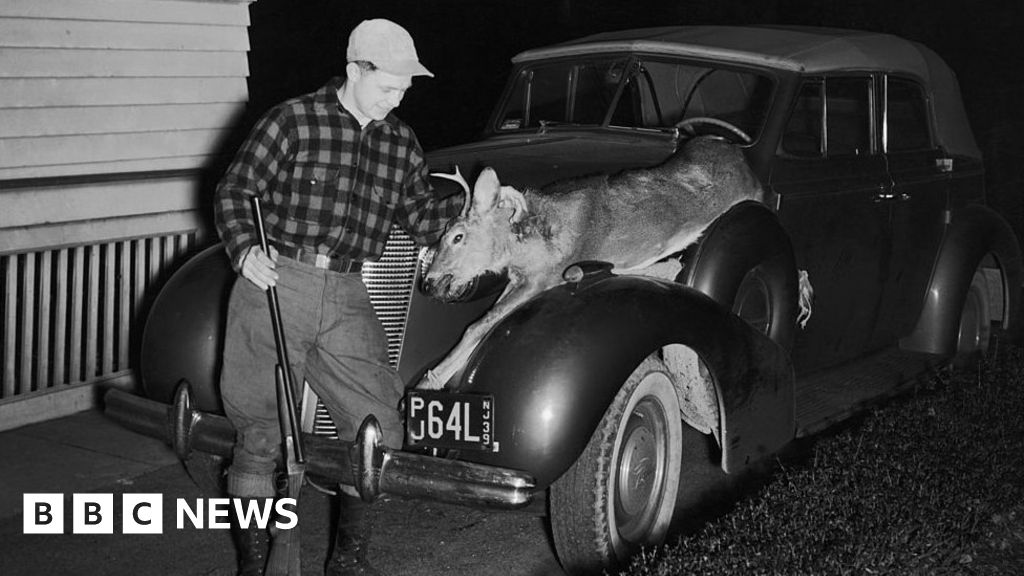 Fewer and fewer Americans are taking up hunting every year, prompting some advocates to express concern for the future of the pastime, as well as the wildlife and nature conservation that hunters’ fees support, writes Jonathan Berr.

Hunting has become a curiosity rather than a necessity for many people, says Mike Busch.

When he tells people that for more than a decade he’s only eaten meat from animals he’s hunted, the New Jersey resident is peppered with questions from people who think that his chosen diet is “cool” and from those who wonder what he has against supermarkets.

“It was a whole different world when I grew up hunting,” Busch tells the BBC. The 52-year-old activist has hunted for more than four decades.

“There was a whole lot of camaraderie among hunters. A lot more people ate what they killed.”

There is a demographic time bomb facing the US hunting industry as older hunters quit the sport at a faster rate than younger ones can replace them.

It’s a problem that is decades in the making and presents challenges for US wildlife conservation, which is funded by licence sales and taxes on hunting gear.

According to a recent analysis of US Fish & Wildlife Service (USFWS) data by OutdoorLife, a magazine geared toward hunters, participation in the sport peaked in 1982 at 17 million. There are roughly 15 million American hunters this year, according to the USFWS.

Michigan Technical University Professor Richelle L Winkler says that men born between 1955 and 1964 participate in hunting at higher rates compared with succeeding generations. Neither younger men – nor the growing numbers of women taking up hunting – are doing so at a fast enough pace to offset the declines in the older demographic.

“I don’t see this as something that can be reversed,” Winkler says.

Growing urbanisation is also an issue.

According to the Pew Research Center, urban areas where hunting tends to be less popular have grown at a rate of 13% since 2000, while half of US rural counties, where the sport is favoured, have fewer residents than they did in 2000. As a result, fewer people are growing up as hunters and aren’t passing down the tradition to their children.

To be sure, hunting continues to be big business in the US. The Congressional Sportsmen’s Foundation estimates that Americans spend more than $23.7bn (£18bn) annually on hunting-related purchases, including firearms.

Dick’s Sporting Goods, one of the largest US sporting goods retailers, is distancing itself from hunting after pulling some firearms off its shelves in the aftermath of the 2018 school shooting in Parkland, Florida.

Earlier this year, the chain unloaded eight of its Field & Stream hunting specialty stores to rival Sportsman’s Warehouse. Dick’s also quit selling hunting gear in 150 of its 858 stores and likely will leave the business entirely, according to CFRA Analyst Camilla Yanushevsky. A spokesperson for Dick’s did not respond to a request for comment.

Hunting also has an image problem and is often misunderstood by people who didn’t grow up with it, according to enthusiasts.

When Kirsten Black took up hunting at the age of 20, her family was “unhappy about it”, she says.

“But once I challenged them about eating grocery store meat, they settled into the idea of ethically hunting for meat.”

Black, a spokeswoman for the Council to Advance Hunting and the Shooting Sports, tells the BBC that she was personally opposed to hunting until she learned of the benefits that came with controlling animal populations. One problem hunting mitigates, she says, is how often deer cause deadly automobile crashes.

According to Busch, the veteran New Jersey hunter, trophy hunters eager for big game kills give subsistence hunters like himself a bad name.

“I have never been a trophy hunter and never will be,” he says.

In an effort to maintain interest in hunting, states are ramping up marketing to attract more hunters even as they cut back spending in other areas as government funding dries up.

According to OutdoorLife, many of these marketing efforts by hunters are ineffective. Other programmes have had some success in attracting new hunters, such as “foodies” – amateur food connoisseurs – eager to find a source of sustainably grown meant.

“We have been able to slow it a little bit, but the truth of the matter is that we are going to have a decline,” said Keith Warnke of the Wisconsin Department of Natural Resources. “It’s a demographic impossibility that we won’t.”

Kelly Hepler, Secretary of South Dakota Department of Game, Fish, and Parks, estimates the numbers of waterfowl hunters have fallen by more than half over the past six years to 12,000 from 25,000.

As a result, the department’s budget has been slashed by 12% in recent years. Like most states, South Dakota doesn’t fund conservation directly from taxpayers, a system that dates back to the late 19th Century, but instead relies on taxes extracted from hunters.

“I didn’t foresee 10 years ago that we’d be losing hunters at the rate that we are losing them now,” says Hepler, who also is president of the Association of Fish and Wildlife Agencies.

As a result of the fiscal restraints, fish and wildlife agencies have to make tough choices such as deferring maintenance on facilities in public areas or entering into fewer partnerships with private landowners to preserve environmentally sensitive areas like wetlands, according to Hepler.

“It decreases our ability to provide what I call good conservation,” he said.

Animal rights groups such as Peta support finding alternative ways to fund conservation that are unrelated to hunting, which it vehemently opposes.

“It’s a problem that we are using a system that is from the 19th Century, and is completely outdated and out-of-step with modern values,” said Ashley Byrne, a Peta campaigner.

“Instead of responding to that by rethinking how we are funding these areas, wildlife management agencies are just trying to prop up this old broken system by encouraging younger generations and women to hunt.”

Still, according to a National Shooting Sports Foundation survey released earlier this year, 80% of Americans approve of legal hunting. But there’s a catch – their support varies widely depending on the reason.

Approval is high when animals are being killed for utilitarian reasons such as to protect humans or property, while less than a third support trophy hunting.

But even so, most Americans increasingly prefer to leave the actual hunting to others, a trend that appears to be here to stay.

“I am not sure that I would call it a crisis,” says Hepler. “But it’s tremendously troubling”.