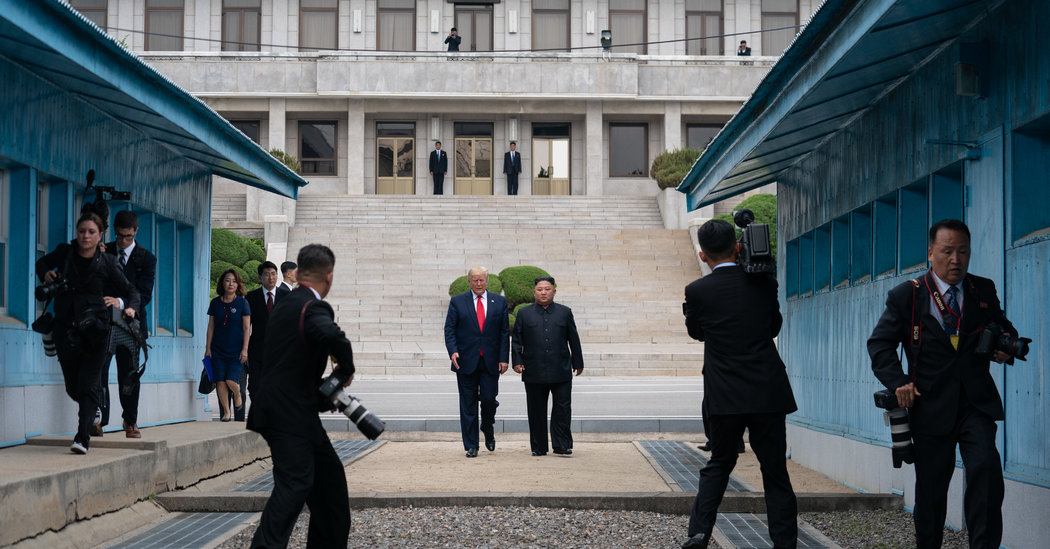 WASHINGTON — American military and intelligence officials tracking North Korea’s actions by the hour say they are bracing for an imminent test of an intercontinental ballistic missile capable of reaching American shores, but appear resigned to the fact that President Trump has no good options to stop it.

If the North goes ahead with the test in the coming days — Pyongyang promised a “Christmas gift” if no progress had been made on lifting sanctions — it would be a glaring setback for Mr. Trump’s boldest foreign policy initiative, even as he faces an impeachment trial at home.

American officials are playing down the missile threat, though similar tests two years ago prompted Mr. Trump to suggest that “fire and fury,” and perhaps a war, could result.

Mr. Trump often cites the suspension of long-range missile and underground nuclear tests for the past two years as evidence that his leader-to-leader diplomacy with the North was working — and that such negotiating skills would persuade the North’s leader, Kim Jong-un, to give up his arsenal.

The administration’s argument has now changed. Should Mr. Kim resume tests, American officials say, it will be a sign that he truly feels jammed, and has concluded Washington will not lift crushing sanctions on his impoverished nation anytime soon.

Left unaddressed, however, is the challenge that a new missile test would represent, and what that would mean for the sanctions strategy. Over the past week, Stephen E. Biegun, the North Korea envoy who was confirmed by the Senate on Thursday as the next deputy secretary of state, has traveled across East Asia to also try to stem new efforts by Russia and China to weaken those sanctions.

Military officials say there are no plans to try to destroy a missile on the launchpad, or intercept it in the atmosphere — steps both Presidents George W. Bush and Barack Obama considered, and rejected. It is unclear if the military’s Cyber Command is still trying to sabotage the launches from afar, as it did under the Obama administration, with mixed results.

Instead, officials say, if the North resumes its missile tests, the Trump administration will turn to allies and again lobby the United Nations Security Council for tightened sanctions — a strategy that has been tried for two decades.

Beneath the recent threats is the onset of a cold reality: In the 18 months after Mr. Trump and Mr. Kim first met in Singapore, with declarations of warmth not seen since the suspension of the Korean War in 1953, the North has bolstered its arsenal of missiles and its stockpile of bomb-ready nuclear material.

New estimates from a leading authority suggest that Mr. Kim has expanded his arsenal substantially since Mr. Trump announced on Twitter after Singapore that “there is No Longer a Nuclear Threat from North Korea.”

Siegfried S. Hecker, the former head of the Los Alamos National Laboratory and one of the few Westerners who has seen the North’s uranium production facilities, says he believes the country has fuel for about 38 warheads — double an earlier estimate that he and other scientists and intelligence analysts had issued.

In recent weeks, the North has conducted ground tests of what appear to be new missile engines that Pyongyang said would bolster its “nuclear deterrent,” suggesting that it has little intention of giving up its ability.

“I think part of this may be bluff on their part,” John R. Bolton, the former national security adviser, said to NPR on Thursday. “They think the president’s desperate for a deal, and if they put an artificial time constraint on it, they may think they’re going to get a better deal. We’ll just have to wait and see.”

“But,” he noted, “this is all part of the North Korean playbook.”

A new element of the playbook could be that Mr. Kim is calculating that impeachment has weakened Mr. Trump, making him more desperate for a policy victory.

Senior foreign policy officials and military commanders are bracing for perhaps the most serious cycle of crisis yet.

With no diplomatic progress between Washington and Pyongyang since the implosion of the last summit in February between Mr. Trump and Mr. Kim in Hanoi, Vietnam, administration officials are loath to see Mr. Trump leap into another face-to-face negotiation. While Mr. Trump’s initial diplomatic outreach to Mr. Kim raised hopes and generated positive headlines, the president accepted vague language calling for the “denuclearization of the Korean Peninsula” as an ironclad commitment by the North to rid itself of its own weapons.

The expected North Korean escalation will leave Mr. Trump with an unpalatable choice. He could reprise his alarming threats of military action from late 2017, infusing the 2020 election year with a sense of crisis, which could cost him votes — and risk real conflict.

Or he could endure the new provocation and double down, betting that greater sanctions could somehow force the North to abandon its decades-long course toward a nuclear-tipped missile capable of striking the continental United States.

Hopes for a Speedy Disarmament, Dashed

When Mr. Trump emerged from his daylong Singapore summit with Mr. Kim, the first time the leaders had ever met, he sounded certain that progress would be swift.

“I think he will do these things,’’ Mr. Trump said. “I may be wrong. I may stand before you in six months and say, hey, I was wrong.”

Roadblocks appeared almost immediately. The North refused to turn over an inventory of its weapons and delivery systems. However, there were signs Mr. Kim wanted to open up his nation’s economy, analysts said.

After exchanging warm letters, the leaders met again in Hanoi, with Mr. Trump offering a grand bargain — an end to all sanctions for full disarmament. The president even offered to help build hotels along North Korea’s east coast.

Mr. Kim said he would agree to dismantle the main nuclear site at Yongbyon, the heart of the North’s nuclear program, in return for relief from the most onerous sanctions, which Mr. Obama began in 2016 and Mr. Trump accelerated. Mr. Trump was tempted to accept, former aides said, but Secretary of State Mike Pompeo and Mr. Bolton stopped him, arguing that important uranium enrichment sites of the North’s were outside the walls of the facility. The talks ended in failure.

In the months that followed, the administration debated whether it should soften its demand that the North dismantle all of its nuclear infrastructure before receiving substantial benefits. There was talk of negotiating an interim “nuclear freeze”; while that would keep the problem from worsening, it ran the risk of enshrining a nuclear arsenal already a third the size of Pakistan’s and India’s.

It took until October for a new North Korean team to assemble and meet with Mr. Biegun. He thought the meeting went well until, at the end of the day, the North’s delegation returned to read a clearly prewritten statement denouncing the United States.

The teams have not met since.

The recent threats from Mr. Kim come as he is preparing for two important political events — a year-end plenary session of the Workers’ Party of Korea and a New Year’s speech. Mr. Kim had declared at the start of 2019 that North Korea would not give up a single weapon until the United States lifts sanctions. He then gave Mr. Trump a year-end deadline.

Now Mr. Kim finds himself empty-handed, unable to stride into the party plenum in triumph or deliver a pronouncement of victory on Jan. 1. Backed into a corner, he is trying once again to use his main leverage — the threat of weapons tests or military action — to coerce Mr. Trump into sanctions relief, analysts say.

“Things have not worked out the way he has anticipated,” said Jean H. Lee, a Korea expert at the Wilson Center. “I suspect that he will keep provoking President Trump to compel him to get back to negotiations, but try to avoid overtly confronting him, because he wants to leave open an opportunity.”

In signing a major defense bill Friday evening, Mr. Trump put into place new sanctions on North Korea, including the possibility of financial penalties on Russia and China in 120 days if they trade with the North.

“We will be keeping a very close eye on that,” Senator Chris Van Hollen, Democrat of Maryland, who wrote the provisions, said in an interview. “It would be a huge mistake for the president to waive these sanctions unless he can certify progress on major issues.”

Mr. Kim could choose to launch a satellite rather than an intercontinental ballistic missile on the bet that might push Mr. Trump to loosen sanctions without inciting a violent reaction.

Mr. Kim could also coax China and Russia into further easing sanctions at the United Nations. Both nations are eager to reassert a leadership role on the North Korea issue.

On Thursday, Luo Zhaohui, China’s vice minister of foreign affairs, said at a news conference in Beijing that easing sanctions, as China and Russia had proposed on Wednesday at the United Nations, was the “best solution” to “break the deadlock on the peninsula.”

Analysts say China does not appear to be forcing all North Korean workers to leave its borders, as it is required by a United Nations resolution. China said it complies with the sanctions resolutions. American officials say Beijing also must stop ship-to-ship transfers carried out by North Korea of energy products.

American efforts to maintain a common front against the North may be further complicated next week when President Xi Jinping of China hosts a summit with Prime Minister Shinzo Abe of Japan and President Moon Jae-in of South Korea. Mr. Trump’s efforts to get the South to cover the full cost of the American troops based there has strained relations between the allies.

Mr. Trump contemplated attacking North Korea early in his administration, when officials floated the idea of a “bloody nose” strategy intended to signal that Washington would never allow the North to reach the point when it could hold American cities hostage with nuclear weapons. “Military solutions are now fully in place, locked and loaded, should North Korea act unwisely,” Mr. Trump tweeted in August 2017.

More recently, Mr. Trump has shown a keen interest in winding down conflicts rather than starting new ones. Mr. Trump has also forced out hawkish senior advisers, including Mr. Bolton, who once argued for a pre-emptive strike on North Korea.

But Mr. Trump’s current approach — gradual diplomacy backed by the “boa constrictor” of sanctions, perhaps toward an interim freeze — is unfolding in the shadow of similar efforts by four presidents who failed to stop the North.

Mr. Trump has essentially shrugged off the 13 short-range missile or rocket tests that North Korea has conducted since May. An intercontinental missile launch would be more difficult to ignore, though, and it is unclear how he might respond, especially if such a test intensifies criticism that Mr. Kim has manipulated him.

Thus far, Mr. Trump is showing little appetite for a return to the “fire and fury” tensions of two years ago.

“I have a very good relationship with Kim Jong-un,” Mr. Trump told reporters at the White House this month before adding, in what could prove to be wishful thinking, “I think we both want to keep it that way.”