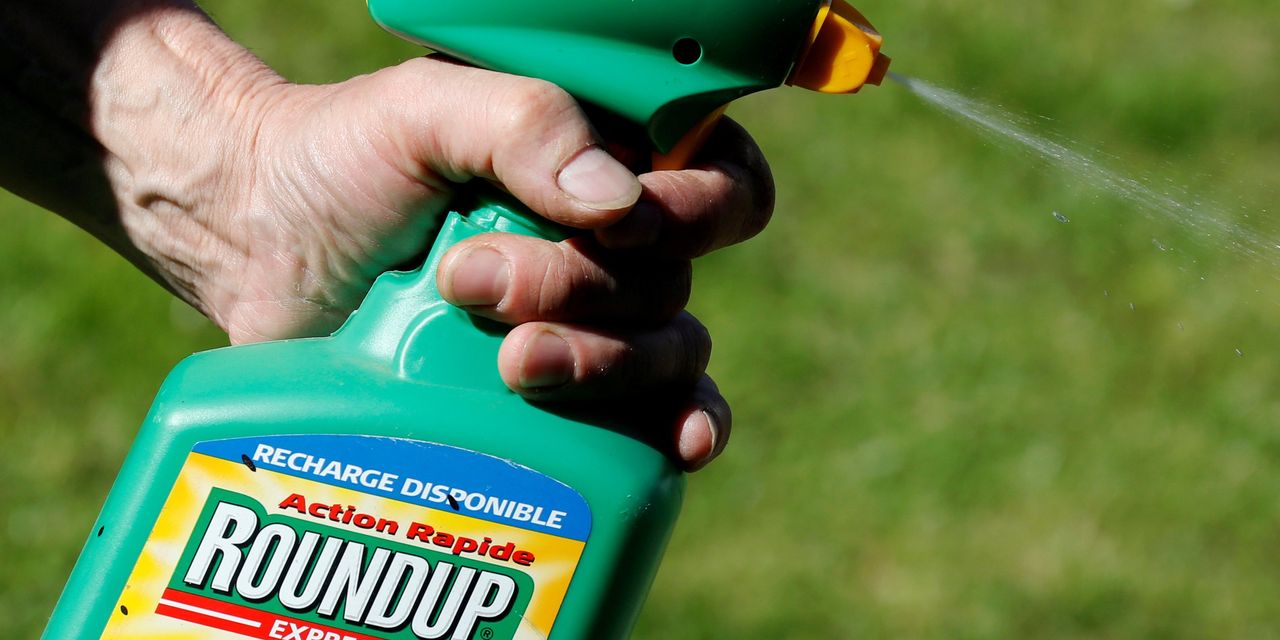 The Trump administration is backing

in the German chemical maker’s high-stakes court fight over the world’s most widely used weedkiller.

The Environmental Protection Agency, working with the Justice Department, filed court papers Friday supporting Bayer’s argument that glyphosate, the active ingredient in the company’s Roundup herbicide, poses no cancer risk. The filing backs Bayer’s appeal in federal court of a $25 million verdict in the case of a California man who blamed Roundup for causing his non-Hodgkin lymphoma, one of tens of thousands of similar cases.

Lawyers for both government agencies argued the verdict should be overturned because it would have been illegal for Bayer to print cancer-risk warnings on Roundup labels. They said Congress granted the EPA the sole authority over safety labels on chemical products, and the agency wouldn’t have approved a cancer warning for Roundup.

While it isn’t the first time a regulator has weighed in on such a case, legal scholars said the filing would likely catch the appeals court’s attention. The federal government will often weigh in on cases when the interpretation of a federal statute is involved, they said.

Several Roundup trials have been postponed in recent months as Bayer and plaintiffs’ attorneys try to negotiate a settlement as part of a court-ordered mediation overseen by Ken Feinberg, who helped divvy up compensation to victims of the 9/11 terrorist attacks and the 2010 Deepwater Horizon oil spill.

Bayer is under pressure to resolve the litigation after the company’s shares dropped 23% since the first verdict in August 2018, with the company since then divesting several businesses and laying off thousands of staff world-wide. In the spring, investors refused to back the actions of Bayer’s management in a vote at the company’s annual shareholder meeting. Bayer acquired Monsanto Co., Roundup’s maker, in June 2018 for $63 billion.

The government’s filing reiterates the agency’s long-held view that glyphosate doesn’t represent a cancer risk, most recently upheld in a December 2017 EPA review.

“EPA has a longstanding position—It’s not just this administration which determined that this pesticide does not cause cancer,” said Jeffrey Clark, the assistant attorney general of the Environment and Natural Resources Division at the Justice Department in an interview. “EPA should be in control. Congress set it up that way.”

That view is being challenged in U.S. courtrooms, where farmers and residential gardeners have pointed to the International Agency for Research on Cancer’s 2015 classification of glyphosate as “probably carcinogenic to humans,” while criticizing company-funded studies that the EPA and other regulators have included in their glyphosate assessments.

Bayer rejected IARC’s link between glyphosate and cancer, saying the agency cherry-picked some studies and ignored others that regulators have used to establish the chemical’s safety.

Three consecutive juries ruled in favor of plaintiffs over the past year and a half, awarding hundreds of millions of dollars in damages. The EPA’s brief comes in the case of Edwin Hardeman in the Ninth U.S. Circuit Court of Appeals, the only one of the three trials so far to take place in federal court.

Aimee Wagstaff, Mr. Hardeman’s attorney, called the appeal a “Hail Mary” and said courts have previously rejected the argument made by the company and the government that federal regulations should negate the civil suits. “We are confident the Ninth Circuit will also reject Monsanto’s argument and rule in favor of Mr. Hardeman,” she said.

U.S. regulators and administration officials have stepped up their defense of glyphosate, the most widely used weedkiller among U.S. corn and soybean farmers, as the number of lawsuits balloons and some towns and countries have moved to ban the spray.

said the agency wouldn’t permit cancer warnings to be included on jugs of Roundup and other glyphosate-based herbicides, calling it a potentially false claim as the EPA has determined the chemical to be safe. That directive came after California unsuccessfully tried to require cancer warning labels for glyphosate, citing IARC’s classification of glyphosate as a probable carcinogen.

Bayer argued in its own recent Hardeman case filing that the EPA’s refusal to allow warnings should override the jury’s decision. The company argued it cannot be held liable by the jury for marketing a legal product with an EPA-approved label, which many scientists and regulators say isn’t carcinogenic.

The EPA’s brief mirrors those arguments. It says that while states can restrict the sale or use of pesticides, they cannot set any requirements for what can go on the label, adding only the EPA can.

The EPA’s filing could give Bayer additional ammunition as the company faces more scheduled trials in 2020. Plaintiffs’ central argument—that Bayer knew its herbicide posed a cancer risk, and failed to warn users—could be challenged because the product’s chief regulator barred manufacturers from including such a warning, lawyers said.

The appeals court judges “may not ultimately agree with the side the government is supporting for other reasons,” said Ben Feuer, an appellate lawyer in San Francisco, but the agency’s brief “is going to be closely parsed and they will engage with it.”

—Sara Randazzo contributed to this article.

Write to Jacob Bunge at jacob.bunge@wsj.com and Timothy Puko at tim.puko@wsj.com