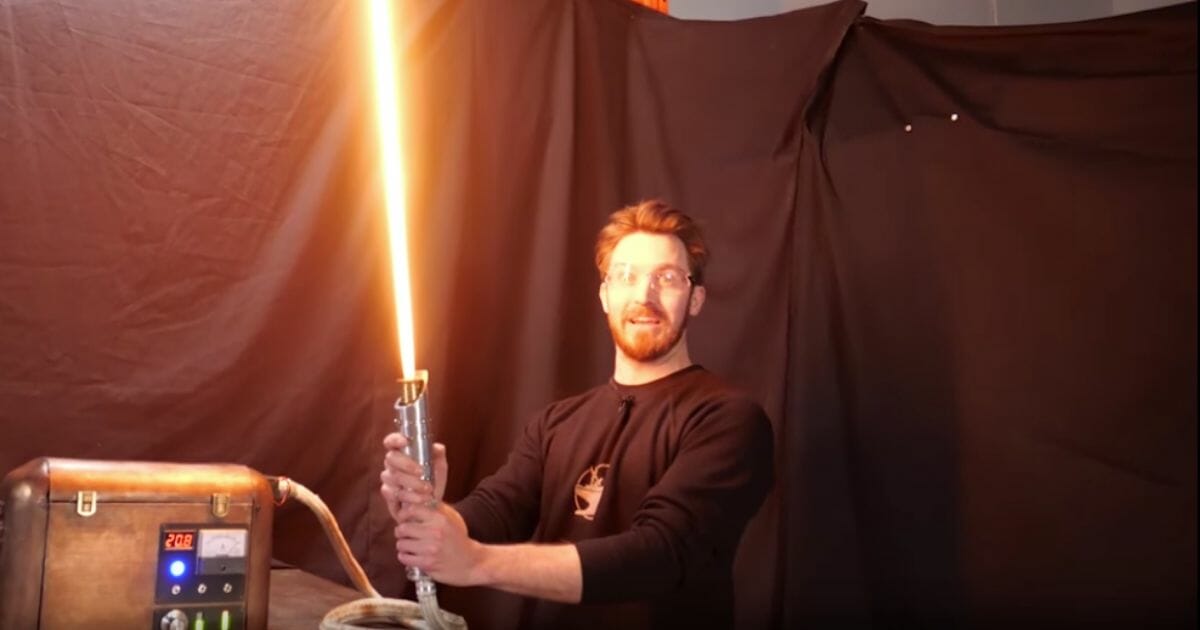 One of the key elements to the Star Wars universe and the ancient Jedi way is the glowing lightsaber.

The glowing, hot sword, whether wielded by Darth Vader, Kylo Ren or Luke Skywalker, has become an iconic part of the fandom.

A broomstick, twig or even a plastic toy from the store can instantly become a lightsaber with a little creativity and the best sound effects possible.

The possibility of seeing or even holding a real lightsaber, however, seemed to be more fictional than scientific.

That is, until James Hobson and his crew at Hacksmith Industries proved otherwise.

Hacksmith has recreated other fictional weapons such as Thanos’ sword and Thor’s hammer, Men’s Health reported, but in their newest video, they decided to tackle a seemingly impossible task: building a lightsaber.

Or at least the prototype of a lightsaber.

According to Star Wars lore, the lightsaber was preceded by the “protosaber,” which was connected to a wearable energy pack.

Due to the amount of energy required to make the lightsaber glow, the Hacksmith crew knew that a handheld lightsaber not connected to an energy source would be impossible.

They explained a real lightsaber would require around 1.69 gigajoules of thermal energy, which is more than a bolt of lightning contains.

It may be needless to say, but this shouldn’t be tried at home.

Despite the huge undertaking, the crew moved forward and created a protosaber that would make Yoda say, “Proud, I am.”

After a few trial and errors, and narrowly escaping multiple explosions, the team was finally able to create a working protosaber that glows just as brightly as the laser swords seen in the beloved Star Wars franchise.

And it can slice through various items like butter, too.

“This is so dangerous. I think if it accidentally hit my face, I’d be in trouble,” Hobson said in the video.

It even made the iconic swooshing sounds heard in the films!