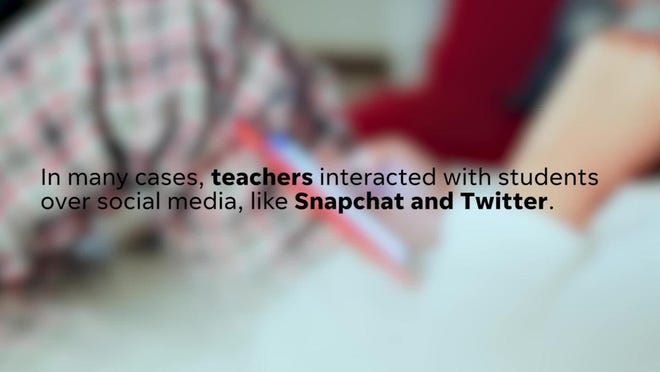 PHOENIX — Arizona education leaders allowed a Scottsdale teacher accused of sexual misconduct in West Virginia to remain in the classroom for two years while the two states’ investigations plodded along, officials and documents now reveal.

The Arizona State Board of Education revoked Cheesebrough’s teaching certificate on Dec. 13. He worked at Coronado High School up until this month, when he resigned following an article by The Republic.

It took West Virginia more than a year and a half to discipline Cheesebrough, and then it took nearly another year for Arizona to take action. All that time, Cheesebrough continued teaching.

The Cheesebrough case exemplifies the loopholes teachers can slip through when they face allegations of sexual misconduct or abuse. In 2016, a USA TODAY investigation found more than 100 teachers who lost their teaching licenses, and more who simply lost their jobs, but were still working with children or young adults years later.

Decades of cases:A New York teacher was accused of raping a student. He went on to teach elsewhere

Cheesebrough had resigned as assistant principal from a West Virginia school in May 2017 after he was accused of an inappropriate relationship with a teenage student. Both he and the student said they had kissed.

The Scottsdale Unified School District hired him a month later. Spokeswoman Nancy Norman earlier this month said his application did not indicate a pending investigation or any accusations lodged against him.

However, Stefan Swiat, spokesman with the Arizona Department of Education, wrote in an email that its investigators notified the then-district superintendent about Cheesebrough in November 2017.

Swiat said Arizona had to wait for West Virginia to discipline Cheesebrough before Arizona could take action against him.

“This is really a question for the West Virginia Department of Education and why it took that organization two years to complete its investigation,” he wrote.

In Arizona, Swiat added, the Education Department is overwhelmed with cases of teacher misconduct.

The department’s investigative unit, tasked with investigating allegations of misconduct against educators, is staffed with four investigators.They have caseloads as high as 150.

“It’s eye-opening the amount of misconduct that our agency looks at,” he said last month. “It’s our utmost priority to make sure that none of us ever have to find out that a teacher slipped through the cracks.”

Arizona State Board of Education documents characterize the alleged relationship between Pete Cheesebrough and a teenage student in West Virginia as an “emotional relationship.”

The student testified in a West Virginia hearing that, at age 16, she remembered thinking Cheesebrough had feelings for her.

At 18, she told him, “I feel like you actually like me,” according to the records. In response, the then-assistant principal “moved next to her, put his hand on her leg, kissed her hand and gave her his phone number.”

He also told her he masturbated thinking about students, according to documents obtained by the Charleston Gazette-Mail in West Virginia. She testified that she eventually felt like he had taken advantage of her.

They communicated via text message 86 times in a span of 13 days, investigators found. At one point, school principals called her into an office and asked her about her relationship with Cheesebrough, but documents indicate she lied about it at the time.

Administrators confronted Cheesebrough twice. In February 2017, he said he had never seen the student outside of school nor did he send her emails or text messages. Administrators warned him to stay away from the student.

After the February meeting, he reportedly emailed the student, according to Arizona records.

Social media: A dangerous connection between teachers and students

In March 2017, he was placed on paid administrative leave. At a meeting that month, he told the district’s superintendent the student kissed him, but Cheesebrough told her it couldn’t happen again.

Cheesebrough resigned from the district a few months later. It would be another two years until West Virginia would suspend his administrative certificate. The state never revoked or suspended his teaching certificate.

In June 2017, Scottsdale Unified hired Cheesebrough as a teacher.

On Oct. 31, 2017, Garnett Burns, then-chief investigator with the Arizona Department of Education, emailed a West Virginia investigator to thank him for sending information on Cheesebrough, according to records obtained by The Arizona Republic.

“I do appreciate you contacting me so I have a head start on this and am able to prevent further issues in our schools here,” she wrote.

But on Thursday, Swiat told The Republic in an email that Arizona could not complete its investigation until West Virginia completed its discipline process.

The West Virginia superintendent wrote the student exhibited “the profile of the typical victim of boundary violations” and that Cheesebrough tried to attack her credibility at the hearing by pointing out her vulnerabilities.

Reporting by the Charleston Gazette-Mail revealed officials in that state said they “did not want to interfere with Cheesebrough’s new job in Arizona” in explaining why they did not want to revoke his teaching certificate.

By then, Arizona officials had known about the West Virginia claims and Cheesebrough had worked at Coronado High for more than a year.

Nearly another year passed before the Arizona State Board took its own action.

Spelich, a retired Chicago Police Department homicide detective, said he accepted a job in the Arizona Department of Education investigative unit believing the new role wouldn’t be as busy as his old job.

That was a “tactical” error, he said in November.

Claims of teacher sexual misconduct and other offenses start at Spelich’s unit. If investigators find the claim to be credible, they forward their findings to the State Board of Education for discipline.

The State Board votes on discipline: A teacher’s certificate can be revoked for five years, permanently revoked in the case of a criminal offense, or suspended for a number of years.

At any point in the process, an educator can voluntarily surrender his or her certificate.

Position of trust:Teachers accused of sex misconduct are investigated, but state falls short in protecting kids

Four investigators plus Spelich and one administrative assistant work in the investigative unit. The number of misconduct cases has steadily risen since 2016 and is forecast to rise by another 30% in the next two years, according to the State Board.

While the average caseload of the unit is 150 per investigator, Spelich said the ideal caseload is 50. Higher caseloads mean it takes longer for investigators to bring some cases in front of the board, potentially leaving an offender working in a school for months.

This would likely be part of the annual legislative budget process. The legislative session will begin in January.