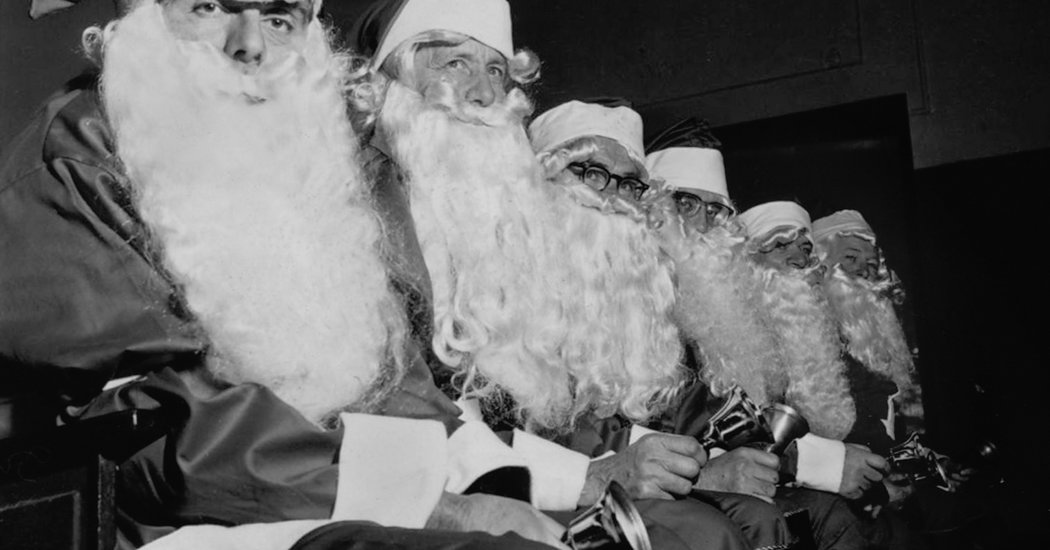 For years, there wasn’t much confusion about who could join the International Brotherhood of Real Bearded Santas, the largest membership organization of Santas in the world. It was open only to men with whiskers long enough to be styled like St. Nick’s, which could withstand a firm tug from a formidable toddler.

Then, in 2016, came the vote about whether to admit Mrs. Clauses. After some initial skepticism, the proposal passed. But the push to open membership to elves, Grinches, reindeer handlers and Santas with designer beards has proved more contentious. It was voted down, but could re-emerge in the future if enough members demand it.

These are boom times for Santa, now an increasingly global holiday fixture, beloved from Sheboygan to Hong Kong. But he’s struggling with the same issues of privilege and inclusion that have plagued precincts south of the North Pole. Then there’s the broader question of mission. Is being Santa an occupation in need of clear professional standards? Or is it a calling? Welcome to Santa’s World 2019.

“The next generation of Christmas performers, who have grown up with a lot more inclusivity, just don’t see what the big deal is,” said Deanna Golden, an independent Mrs. Claus who argued for the rights of elves and clean-shaven Santas. But some of the older, more conservative Santas, she said, “are not ready for a fully inclusive organization. They like being part of this exclusive club of men with real beards.”

Santas today are under pressure to adapt to the modern era, whether it be learning how to respond to children’s wishes via video chat or sharing the spotlight with an empowered wife, said Susen Mesco, who manages 2,200 Santas and has worked in the industry since the 1980s.

“Back then, I basically got some guys off the street, sat them in a chair, strapped a beard on them, and mommies were good,” she recalled. “Now, if Santa’s not wearing an $8,000 outfit and doesn’t have a $3,000 groomed beard that’s just been professionally dyed, and if he’s not wearing clean white gloves and if he doesn’t do Spanish and sign language, then mommies are not happy.”

Ms. Mesco said the public’s demand for higher standards led her to create a professional certification program for Santas, as well as an Elite Santa Placement Program for “A-list” Santas who perform on cruises, and in malls in the Middle East.

Despite booking $2 million worth of Christmas-related business a year, she said, she couldn’t join the largest Santa organization, because she didn’t have a beard.

The Santa Brotherhood, or I.B.R.B.S., as it is now called in the wake of the vote to admit women, has about 2,250 members scattered across more than 40 chapters.

The group’s roots date back to 1994, when 10 real-bearded Santas were hired to do a TV commercial in Hollywood. Over the years, they kept in touch and began trading tips about how to keep their beards white and what to do if a child reported abuse.

The group grew into the Amalgamated Brotherhood of Real Bearded Santas, which began to hold formal gatherings. In 2006, it held the first modern Santa Claus convention, which attracted hundreds of real-bearded Santas and their wives.

But then, the group was thrown into turmoil when its president, Tim Connaghan, was forced to resign over perceived conflicts of interest. A Santa superstar in Hollywood, Mr. Connaghan had his own Santa academy and a Santa placement agency. His success bred jealousy and suspicion.

“There was concern that I had too much clout,” Mr. Connaghan said in an interview last week, days after he appeared in Madison Square Garden with Mariah Carey.

He stepped down, but the new regime engaged in name-calling, questionable financial practices and other un-Santa-like behavior. The nastiness made the national news. The organization collapsed.

But regional groups soldiered on. The Lone Star Santas in Texas. The Buckeye Santas in Ohio. The New England Santa Society.

To restore peace, Phillip Wenz, an elder statesman in the Christmas community, wrote a Santa Claus oath, which commits Santas to recognizing the “brotherhood” of all Santas and dedicating themselves to becoming “well versed in the mysteries of bringing Christmas cheer.” Thousands have taken it.

“Santa is not a profession, it’s a vocation,” said Mr. Wenz. “It’s a lifestyle.”

That is especially true for real-bearded Santas, who look like Santa 24 hours a day. When children gasp at them in grocery stores, they wink. They refrain from cursing, drinking or gesticulating lewdly in traffic. Santa isn’t just a job to them. It’s an identity. Perhaps that’s why efforts to open up the organization have faced resistance.

“Santas are a microcosm of the regular community,” said Stephen Arnold, the current I.B.R.B.S. president. “They all have different education levels, strong opinions about politics.”

Advocates for clean-shaven Santas point out that some ethnicities struggle to grow beards and excluding them feels wrong. Others note that artificial beards have come a long way. (They are now made with yak hair that can be glued to the face.) Still others mention that nearly everyone playing Santas today once perched on the knee of a man with a terrible fake beard, who made children believe he was Santa nonetheless.

“Some of the very best Santas ever did not have whiskers growing out of their face,” said Jonathan Burton, 41, a real-bearded Santa who works as a teacher in California and dyes his beard white to perform as Santa part-time. “To say that the largest Santa organization is not going to include them is preposterous.”

He spoke with authority, since he has interviewed dozens of the nation’s most renowned professional Santas for a podcast about the first time they put on the red suit.

But in the end, the proposal to recognize elves, Grinches and the rest was narrowly defeated last year along the same partisan divisions that have bedeviled the rest of the country. Younger Santas from progressive chapters tended to support the change. Older members in more conservative chapters tended to oppose it. The measure garnered a majority of votes, but fell short of the two-thirds required to pass. Including the wives of real-bearded Santas was one thing. Throwing open the doors to any old Santa or elf who walked in off the street was another.

Some designer-bearded Santas supported the decision.

“Some choose to use real beards,” said Mr. Wenz. “That’s their choice. Everybody has their own thing.”

Mr. Arnold, the current president, said that designer-bearded Santas, elves and reindeer handlers could be brought on as nonvoting “associate” members, and that they were invited to the group’s convention in Atlanta in April.

Ms. Golden, who serves as international secretary for the group, said she was disappointed that more Christmas characters wouldn’t get the full benefits of the organization, but she accepted it. Before playing Mrs. Claus, she consulted for corporations, helping them navigate big cultural shifts.

“Some people resist change. It’s human nature,” she said. “What we really keep on trying to express to people is that being a Santa Claus has nothing to do with the beard on your face. It’s what’s in your heart.”