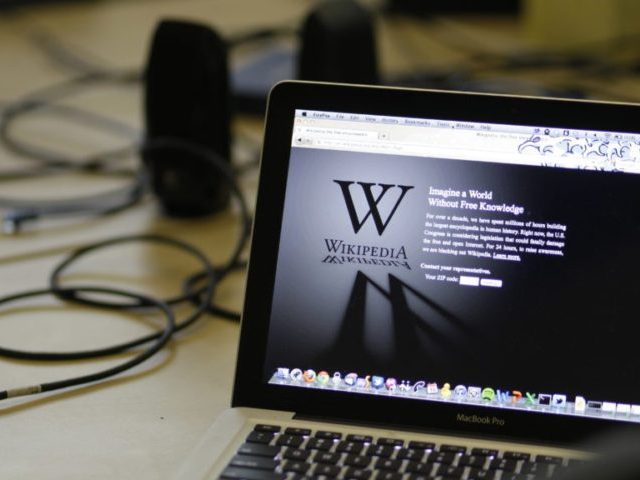 Wikipedia’s GamerGate article has long been subjected to biased editing by opponents of the anti-corruption movement in gaming. They have been aided by major media sources that spent years defaming the movement, which had paid particular attention to press corruption. Breitbart News has found that many of these outlets, including BBC News, USA Today, the Daily Telegraph, and the Los Angeles Times have sometimes relied on Wikipedia itself for their false characterizations of GamerGate without crediting the online encyclopedia.

Some outlets, such as the Washington Post and CNBC, have directly cited Wikipedia. Beyond media sources, numerous academic publications as well as the far-left Southern Poverty Law Center (SPLC) used the deeply flawed and biased Wikipedia article on GamerGate without attribution.

The dispute over GamerGate on Wikipedia has been one of the most chaotic and poorly-reported stories in the history of the online encyclopedia, consistent with how the movement itself was covered by the media, which baselessly associated GamerGate with online trolls who harassed some of the women they criticized. Editors of the online encyclopedia’s article on GamerGate, some who created accounts solely to advance an anti-GamerGate agenda, have exploited false narratives about the dispute over the article to convince administrators on the site to shut out critics using their advanced privileges.

It first came to the attention of this author that the heavily slanted Wikipedia article might be influencing the media due to persistent mention of an incident where actress Felicia Day’s business address, which was also her home address, was posted in the comments of a blog post. Once mention of the incident was removed from the introduction to the GamerGate article and an eye-catching image collage was removed from the body of the article, mention of the incident in the media dwindled to essentially become non-existent.

One of the first clear cases of a news article on GamerGate deriving a substantial portion of its material from Wikipedia was in a December 2014 article in The Kernel by Aja Romano. Several paragraphs in the piece appeared to closely mimic the pacing, structure, and phrasing, of sections from the page on Wikipedia regarding GamerGate’s e-mail campaigns pressuring advertisers to pull out from unethical gaming outlets and sections on the Wikipedia page that falsely frame users of the NotYourShield hashtag, which highlights the diversity of the GamerGate movement, as fake accounts pretending to be female and non-white supporters.

Many news outlets and academic sources use the page on GamerGate for a simple definition. During the time Wikipedia described GamerGate as concerning “misogyny and harassment in video game culture”, articles in outlets such as The Christian Science Monitor and News Corporation Australia repeated this description. The current description of GamerGate involving “issues of sexism and progressivism” has endured for years and appeared in New Zealand media, academic papers, Fusion (the now-defunct Splinter News), and Canadian state-owned broadcaster CBC News (the subject of a years-long effort by GamerGate supporters seeking accountability for unethical reporting on the movement). None of these sources directly credited Wikipedia.

Copying in a near-verbatim manner is often limited to such cases where one or two sentences are used for a basic definition. By excluding the GamerGate movement’s primary interest in ethics in journalism from early in the article, editors can influence media outlets relying on Wikipedia for definitions to portray the movement in a more negative light. However, more extreme cases of copying have emerged over the years as well. This includes an article in the Silicon Republic from mid-2015 where several phrases perfectly match those used on Wikipedia at the time.

Australian Member of Parliament from the Labor Party Tim Watts, in one case, authored a piece in the Huffington Post containing closely-paraphrased material and some instances of word-for-word phrasing matching the negative descriptions on Wikipedia. Watts, currently the opposition’s Shadow Assistant Minister for Communications & Cybersecurity, used GamerGate in his piece to encourage tougher police action against online abuse. More recently, he has criticized the Australian government for not going far enough in its censorship of “extremist” content in reference to measures taken at the time to suppress free speech imageboard 8chan in “emergency” situations.

Among the most egregious cases of copying by a major news outlet is a BBC article about a proposed film based off indie game developer Zoe Quinn’s alleged harassment by GamerGate supporters. Nearly all material about GamerGate in the BBC article appears to be copied from Wikipedia. Some phrases such as “Gamergate has led figures both inside and outside the industry to call for better methods of tackling online harassment” are almost perfect matches for the phrases on GamerGate’s page at the time. The BBC author alludes to using Google for the piece, without directly crediting Wikipedia.

Not all articles copied Wikipedia without credit as pieces in CNBC and a piece by Brianna Wu in The Washington Post both cited it for their descriptions. Articles in USA Today by Mike Snider about the abortive shutdown of GamerGate panels at South by Southwest did not link to Wikipedia, but had an accompanying video with a screenshot of Quinn’s page. One article by Snider described the ethical concerns of GamerGate supporters and efforts to distance themselves from harassment in a strikingly similar manner to Wikipedia. Harvard Political Review published a piece on the alt-right, which described GamerGate similarly to Wikipedia. While not cited for GamerGate details, the piece repeatedly cited Wikipedia and another wiki site for other claims. Some vague similarity also occurred in a Los Angeles Times piece on the South by Southwest controversy, but a one-line description in an LA Times piece this year was a near-perfect match for Wikipedia.

Sometimes news articles dig deeper than the introduction to the Wikipedia page. A piece in The Daily Telegraph talking about gamers killing a female suffragette character in Red Dead Redemption 2 tightly paraphrased several lines from deeper in the Wikipedia page diminishing negative reception of Quinn’s game “Depression Quest.” This was not the first time Daily Telegraph appeared to use Wikipedia for GamerGate descriptions. A previous article about the Sad Puppies campaign in science fiction’s Hugo Awards included a negative GamerGate description closely mirroring Wikipedia’s, but it was removed after participants in the campaign complained about being compared to GamerGate.

Articles about 8chan prior to its takedown this year included material appearing to derive from both Wikipedia’s page on 8chan and the GamerGate page. The Guardian’s piece regarding fired Google employee James Damore’s memo on ideological diversity also seemed to use Wikipedia’s GamerGate description, both calling it a “right-wing backlash against progressivism.”

Global News in Canada also used Wikipedia for its GamerGate description in a piece attacking Comicsgate, referring to a group of graphic novelists seeking to circumvent industry suppression of “politically incorrect” content. Among other close similarities, the article’s description of GamerGate supporters denying harassment is only slightly altered from the Wikipedia description as is its description of GamerGate allegations of media collusion. Outlets around the world such as Deutsche Welle in Germany, TRT World in Turkey, Russia’s RT, and even various local news publications, have copied off the GamerGate article on Wikipedia to varying extremes.

Most egregious of the copying has been in academic publications, rather than media outlets. Several different academic textbooks published over several years have lifted multiple paragraphs from Wikipedia’s GamerGate page without providing credit. The so-called “anti-hate” organization Southern Poverty Law Center, widely cited by leftists, also appeared to rely on Wikipedia’s biased description of GamerGate for its article on “Male Supremacy” last year using a dismissive characterization of GamerGate’s collusion concerns reminiscent of Wikipedia’s. Similar phrasing about GamerGate was also used in their pieces on Mike Cernovich and Proud Boys founder Gavin McInnes.

Aside from legal issues (Wikipedia content is released on a free license, but still copyrighted and requires credit), such use of the heavily biased and unreliable online encyclopedia contaminates the information space with difficult-to-trace circular sourcing. Readers of Wikipedia often know to be wary of its claims. By concealing reliance on Wikipedia, elites touting their credentials in opposition to “fake news” and alternative media are engaging in widespread deception themselves. Anyone reading a textbook or news article describing GamerGate may unknowingly be reading the Wikipedia spin of some anonymous anti-GamerGate burner account.

T. D. Adler edited Wikipedia as The Devil’s Advocate. He was banned after privately reporting conflict of interest editing by one of the site’s administrators. Due to previous witch-hunts led by mainstream Wikipedians against their critics, Adler writes under an alias.