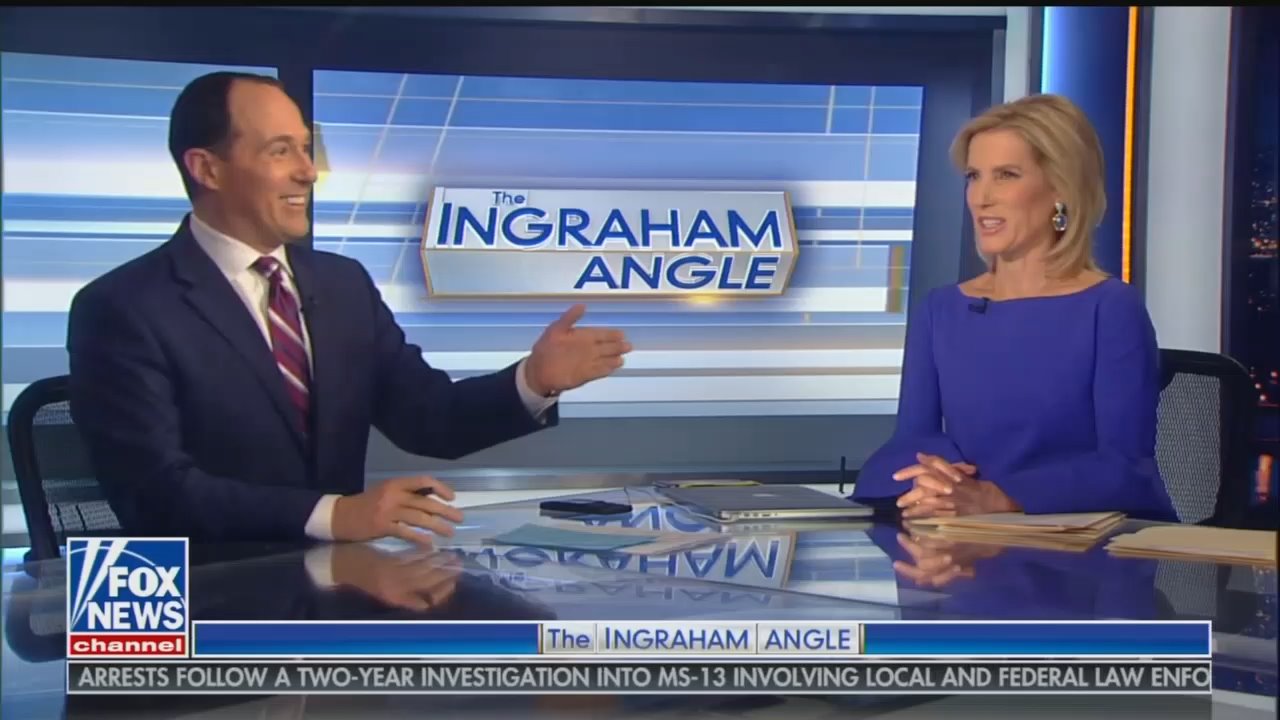 After the duo highlighted liberal media personalities freaking out over Gorsuch showing up on such a “partisan” program, they pointed to the media’s double standard by pointing to Justice Sonia Sotomayor’s appearance on late-night TV and Ruth Bader Ginsburg receiving her own documentary, which was shown CNN.

Also outlining the liberal media hysteria that followed Gorsuch’s decision to use “the holiday greeting” that “dare not speak its name,” Arroyo read aloud a tweet from Playboy’s Amee Vanderpool slamming Gorsuch for “making a point to parrot the ‘Merry Christmas’ talking point of the GOP.” This led to a brief discussion about the ridiculousness of labeling the phrase “Merry Christmas” as a “GOP talking point” that quickly reverted back to the topic of media bias.

Arroyo pointed out that “the journalists were also outraged that Gorsuch appeared on Fox & Friends,” citing Brian Stelter’s tweet complaining about Gorsuch’s appearance on “on one of the most partisan shows on TV?” Ingraham brought up a tweet from CNN national security analyst Susan Hennessey chastising the Supreme Court justice for “appearing on Fox & Friends and not news programs on other networks.”

If Hennessey had bothered to do a little homework, she would have discovered that Gorsuch has, in fact, appeared on “news programs on other networks.” Arroyo suggested that the “CNN employees don’t watch their own network” before putting up a picture of Gorsuch as he sat down for an interview with the network earlier this year. That interview on the supposedly unbiased “Facts First” network seemed to have a “partisan” tilt as reporter Ariane de Vogue expressed concern about a “hard right turn” on the Supreme Court.

Arroyo added: “I guess appearing on partisan shows don’t apply to other Supremes either. Remember when Sotomayor showed up to push her book on Stephen Colbert’s show?”

Before wrapping the discussion, Arroyo reminded Ingraham of the glowing documentary profiling liberal heroine Ruth Bader Ginsburg from CNN. Ingraham asked: “Didn’t RGB…didn’t she go after Trump pretty hard?” Ingraham then answered her own question with “nobody had a problem with that,” referring to the media and the left, who are supposedly so concerned about Supreme Court Justices coming across as “partisan.”

A transcript of the relevant portion of Friday’s edition of The Ingraham Angle is below. Click “expand” to read more.

LAURA INGRAHAM: It’s Friday and that means it’s time for…oh, “Friday Follies.” Can’t trick you. Is a Supreme Court justice too merry? A 25-year-old holiday tune hits number one and Raymond has a Christmas special. Joining us with all the details, Raymond Arroyo, Fox News Contributor. All right, Raymond, Justice Neil Gorsuch, who I know a little bit, he’s a fantastic guy and amazing justice, great pick. He showed up on Fox & Friends this week to promote his book. And then all hell broke loose, what happened?

RAYMOND ARROYO: Well, he uttered the holiday greeting, Laura, that dare not speak its name. Watch.

EARHARDT: Merry Christmas. I love that you say that.

ARROYO: …when Gorsuch said that. Amee Vanderpool, a Playboy writer tweeted “Supreme Court Justice Neil Gorsuch just appeared on Fox and Friends this morning, making a point to parrot the ‘Merry Christmas’ talking point of the GOP.” Now, how is Merry Christmas a GOP talking point?

ARROYO: I have liberal friends, they use Merry Christmas.

ARROYO: I didn’t know that Edmund Burke and Reagan were sitting around here, crafting Merry Christmas. I thought that predated all of them but I guess not.

INGRAHAM: Well, you…you forgot Nancy yesterday, saying “I hope whatever holiday you celebrate, I celebrate Kwanzaa and…and Hanukkah…and, and the…

ARROYO: I thought you were…

INGRAHAM: …birth of our lord.”

INGRAHAM: …as a, as a practicing Catholic…

INGRAHAM: Yeah, exactly. She got them all in with her thing.

ARROYO: Now, the journalists were also outraged that Gorsuch appeared on Fox & Friends.

ARROYO: CNN’s Brian Stetler groused, “how is it appropriate for a Supreme Court Justice to try to goose sales of his three-month-old book by chatting on one of the most partisan shows on TV?”

INGRAHAM: Okay, let me just say this, okay, first of all, is it Stelter or Stetler?

INGRAHAM: Is it Stelter or Stetler?

ARROYO: Well, we’ll get to it.

INGRAHAM: Stelter, he’s saying it’s Stelter and I’m not doing it on purpose. You know, there’s certain things that I just…it’s a…it’s a…maybe dyslexic thing. I don’t know. Then Susan Hennessey, CNN’s national security analyst, tweeted “I don’t object to Gorsuch promoting his book…but appearing on Fox & Friends and not news programs on other networks is a bad look.”

ARROYO: This is Neil Gorsuch from a September appearance on CNN. There he is. So, he was on their network a few…

ARROYO: …months ago. He went there first. I guess appearing on partisan shows don’t apply to other Supremes either. Remember when Sotomayor showed up to push her book on Stephen Colbert’s show. No complaint there. So, just so you understand the rules, should you talk to your friends at the Supreme Court? Gorsuch most avoid partisan shows…

ARROYO: …and no Merry Christmas, only Merry Impeachmas, I guess.

INGRAHAM: Nobody had a problem with that.

ARROYO: You bring her up; remember, they ran that whole RGB documentary on…on CNN. Wall-to-wall; it was special programming. There she is, look, doing her lifts, and that was no problem. No problem. Is she partisan? Is she appearing on a partisan network? The good news is she didn’t say Merry Christmas at any point during her…