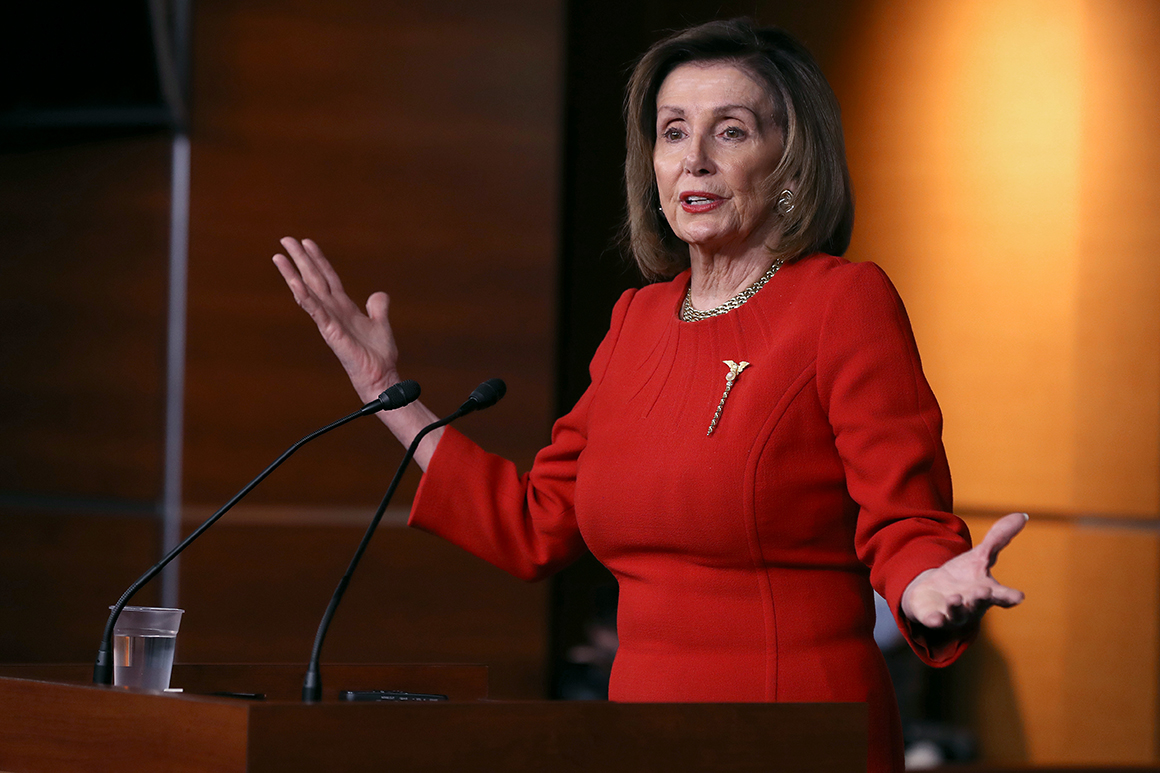 “Fear is never a word used with me. You should know right away,” Pelosi added. “I’m never afraid and I’m rarely surprised.”

The California Democrat’s confidence comes after Congress wrapped up a heavy legislative workload for 2019, including passing key pieces of her party’s agenda. Lawmakers eagerly departed the Capitol Thursday for a nearly three-week recess, although many questions remain unanswered about the next steps on impeachment.

Pelosi, personally, is ending the year on a high note after successfully guiding her diverse, and at times fractured, caucus through a turbulent 12 months bookended by a record-breaking 35-day government shutdown in January and Trump’s impeachment in December.

Even after Democrats won back the House majority in November 2018, some members of Pelosi’s own caucus questioned whether she should be their leader and demanded term-limits on her second turn as speaker. Now, even her loudest Democratic critics are trumpeting Pelosi’s job performance.

The House impeached Trump late Wednesday, charging him with abusing power and obstructing Congress for his effort to pressure Ukraine to help his reelection campaign and then block the House’s inquiry.

Pelosi has refused to commit to sending over the articles of impeachment until McConnell and Senate Minority Leader Chuck Schumer (D-N.Y.) reach an agreement on ground rules for the trial. But she has also downplayed the idea that she will delay the trial as long as possible, saying she’s merely waiting to see what kind of deal the two Senate leaders can reach before she formally transmits them across the Capitol.

McConnell has angered Democrats by repeatedly predicting Trump will be acquitted and by vowing to closely coordinate with the White House during the Senate proceedings. “There will be no difference between the president’s position and our position as to how to handle this to the extent that we can,” McConnell said on Fox News last week.

Pelosi also didn’t hesitate to chide House Republicans’ for their performance during the floor debate over Trump’s impeachment. Some GOP lawmakers compared the president’s predicament to both the crucifixion of Jesus and the Japanese attack on Pearl Harbor in 1941.

“I mean really? Get out of here,” Pelosi exclaimed.

“Some of them don’t believe in the Constitution,” she continued. “They didn’t act upon it, they acted completely against it. They believe in Donald Trump.”

Pelosi said she hasn’t talked to the president in more than two months, since the day Democratic leaders walked out of a White House meeting after Trump unleashed a string of insults about the speaker.

Shortly after that exchange, the White House tweeted a photo of Pelosi standing and defiantly pointing a finger at the president, who, like everyone else at the table, remained seated.

“Nervous Nancy’s unhinged meltdown!” Trump captioned the photo. But the move backfired; the photo immediately went viral with Democrats tweeting it out as a symbol of the speaker’s strength in facing down a hostile president. Pelosi even triumphantly splashed the photo across her Twitter profile, where it remains.

“Can you believe they tweeted that out?” she said Thursday. “They thought it was a thing to tweet it out. ‘There she is falling apart in a room full of white men.’ And I go out saying, ‘All roads lead to Putin.’”

Yet despite epic confrontations with the president, Pelosi has maintained productive working relationships with some of Trump’s closest advisers, Treasury Secretary Steven Mnuchin and U.S. Trade Representative Robert Lighthizer. In recent weeks, she has worked closely with each of them — hammering out a $1.4 trillion spending deal with Mnuchin and negotiating with Lighthizer on a new North American trade agreement.

The House overwhelmingly passed the trade deal on Thursday — its last business of the year — with only 38 out of 233 House Democrats voting against the measure. It was a stunning level of support inside a caucus where trade deals have often faced vocal opposition.

Some progressive activists and pundits have bashed Pelosi for giving Trump a major legislative victory ahead of the 2020 election, but she insists that it was important for the U.S. economy to enact the agreement.

Pelosi also trumpeted numerous changes to the trade deal demanded by Democrats over months of negotiations. Pulling the U.S.-Mexico-Canada agreement to the left persuaded AFL-CIO President Richard Trumka and other labor leaders to support it, which in turn convinced dozens of rank-and-file Democrats to vote for it.

“Sometimes when you do something there’s a collateral benefit,” Pelosi said of the trade deal. “And it was just not worth it to us to say we’re not doing it because of [Trump].”

With much of the legislative lifting done for the remainder of the 116th Congress — next year is an election year — Pelosi said she felt very confident about Democrats retaining their majority in November.

And more than 30 House Republicans have already announced their retirements or left office, a sign that the GOP is not optimistic about taking back power. On Thursday, Rep, Mark Meadows (R-N.C.), a top Trump ally and major force in the hard-line House Freedom Caucus, announced he wasn’t going to run for reelection.

“It means that they know they’re gonna lose,” Pelosi declared. “And if you win, you’re going to serve in the minority under a Democratic president. You may want to spend more time with your family.”