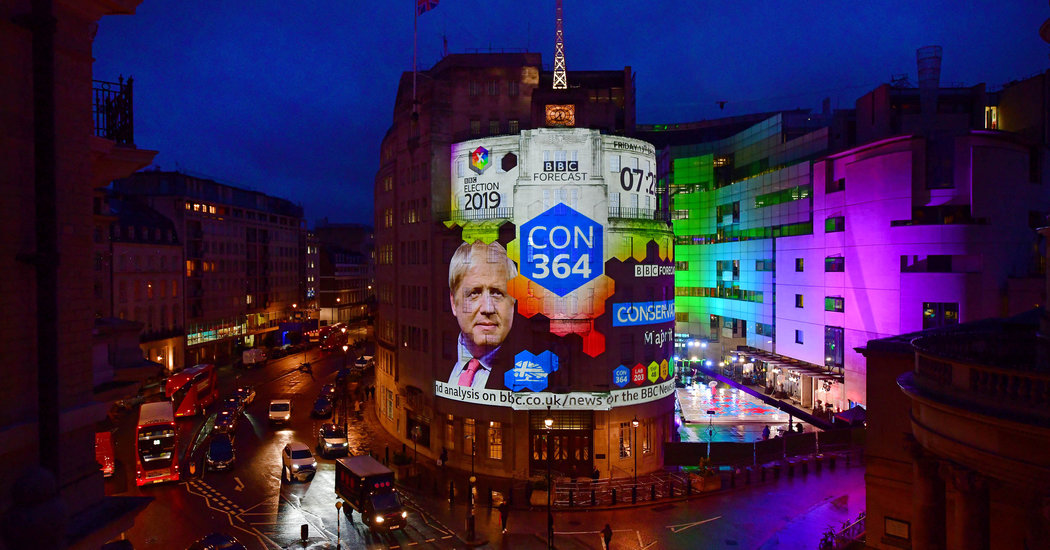 LONDON — The British Broadcasting Corporation has long been one of Britain’s most revered institutions. But after an election campaign in which it faced charges of bias, the media organization finds its future in the hands of some of its biggest critics.

Prime Minister Boris Johnson, coming off a resounding victory for his Conservative Party, raised questions during the campaign about the BBC’s fundamental source of revenue — the license fee charged to all television viewers in the country.

Evidence of his antipathy has been reinforced since the election by reports that he has barred cabinet ministers from appearing on an influential BBC radio program.

“Although there’s been pressure from both sides of the political divide on the BBC, it feels as if the current administration is more likely to act and do something drastic than a prior government would have been able to,” said Richard Broughton, the research director at Ampere Analysis, a London-based firm focused on analysis of media and communications.

The BBC’s staid and trusted reputation has earned it the nickname “Auntie.” But the Conservatives have for years reproached it for using taxpayer money to compete with private companies.

“You have to ask yourself whether that approach to funding a media company still makes sense in the long term given the way that other organizations manage to fund themselves,” Mr. Johnson said on the campaign trail last week.

It has been increasingly evident, however, that the friction goes beyond the BBC’s business model and extends to its journalism, as the prime minister delivers broadsides — evocative of President Trump’s media criticism — against the broadcaster.

Earlier this year, while maneuvering to be the Conservative leader, he denounced the BBC over its coverage of Britain’s prospective departure from the European Union, referring to it as “the Brexit Bashing Corporation.”

Mr. Johnson has never been one to shy from a fight. On Monday, moving into a contentious dispute, he said his government would try to ban local authorities from taking part in the boycott-Israel movement.

But Claire Enders, the founder of the telecommunications and media research firm Enders Analysis, said Mr. Johnson’s “Trumpian manner” toward the BBC and other broadcasters over their news coverage was without precedent.

“This is a very new concept that Boris seems to have — that somehow he can dictate to them what the agenda is and that they have no standing as institutions either here or in the global space,” she said.

Over the weekend, local British news organizations reported that cabinet ministers would boycott the BBC radio program “Today,” whose tough questioning of government officials often sets the day’s political news agenda. The Guardian and The Mail on Sunday said Mr. Johnson’s office would “withdraw engagement” with the program going forward.

The prime minister’s office did not respond to requests for comment for this article.

The BBC responded to the reports, saying, “Our aim throughout the election was to be on the side of the audience, who came to us in their millions.”

“We’ll continue to make our own editorial decisions and report without fear or favor,” it added.

The BBC is not alone in the cross hairs. Mr. Johnson’s party also complained to the country’s broadcasting regulator after a competitor, Channel 4, chose to have a block of melting ice at its debate over the climate, in lieu of Mr. Johnson, who had declined to take part.

And the Tories are not the only ones to find fault with the BBC’s coverage. After their devastating election defeat last week, Labour Party members have cast some of the blame on the media, including the BBC.

“Labour attacks it and Boris attacks it,” Ms. Enders said. “It’s the cognitive dissonance of occupying the center.”

Andy McDonald, a Labour lawmaker, accused the BBC on Monday of bias against his party. “If the BBC are going to hold themselves out as somehow having conducted themselves in an impartial manner, I think they’ve really got to have a look in the mirror,” he said on the “Today” program.

But it is the Conservatives, with their huge majority, who will have the political clout to jeopardize the BBC’s funding.

While the BBC, founded in 1922, has independent control of its programming, it is subject to government scrutiny of its finances and the terms of its charter.

Rishi Sunak, the chief secretary to the Treasury, said over the weekend — on a BBC television program — that Mr. Johnson had asked for a review of the enforcement of the license fee, an annual payment of 154.50 pounds (about $200) that is made by most households that own a television in Britain. Those who do not pay it can face a penalty of as much as £1,000 as well as being forced to cover legal costs.

“I think it’s fair to say people find the criminalization of nonpayment of the license fee to be something that has provoked questions in the past,” Mr. Sunak said.

The license fee generates about £3.6 billion a year for the broadcaster, making up about 75 percent of its funding. Without enforcement, the BBC estimates that it could lose £200 million of that revenue each year. In a statement, it pointed out that the government had already commissioned a review of the matter from a lawyer who found that the current system should be maintained.

Perhaps the most outspoken Conservative critic of the BBC is John Whittingdale, a former culture secretary, who has suggested that the corporation should become smaller and less costly and compete less with private media companies.

“With so much more choice in what to consume and how to consume it, we must at least question whether the BBC should try to be all things to all people, to serve everyone over every platform or if it should have a more precisely targeted mission,” he told Parliament in 2015.

He also told students the following year that he was “driven insane” by the way the BBC deal with complaints about impartiality and how it treated those favoring Britain’s exit from the European Union as “faintly mad.”

Talking about not renewing the BBC’s charter, he said, “It may be that the BBC will cease to exist, which is occasionally a tempting prospect.”