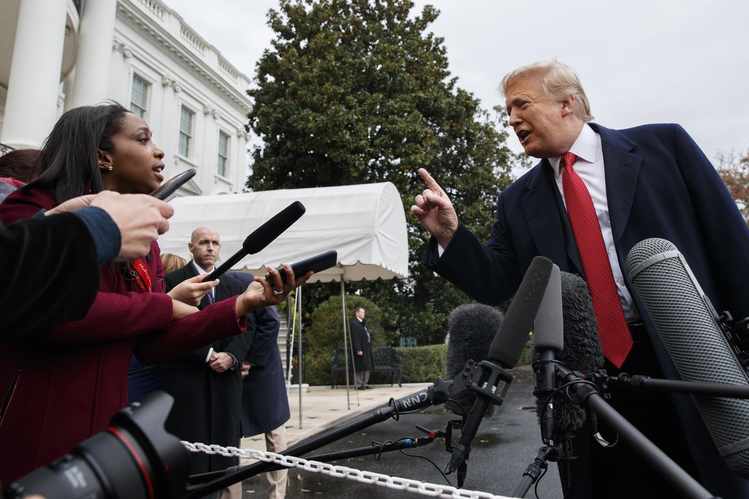 Americans of all political stripes increasingly perceive a fractured Fourth Estate in which news outlets report on parallel universes, covering events most in alignment with their political leanings. While it is certainly true that any given story is often covered more by one outlet than another, is our media system indeed splintering? Specifically looking to television news over the past decade, is it true that CNN, MSNBC and Fox News offer their viewers fundamentally different landscapes?

To explore these questions further, the complete closed-captioning transcripts of CNN, MSNBC and Fox News, along with the evening news broadcasts of ABC, CBS and NBC, from July 2009 to November 2019 (from July 2010 for evening broadcasts) were analyzed by the GDELT Project using Google’s Cloud Natural Language API. BBC News was also analyzed, though from January 2017 to November 2019; the source of all the transcripts was the Internet Archive’s Television News Archive and they were analyzed in a special non-consumptive digital library system.

Google’s API is an AI algorithm that reads through the transcripts and identifies the topics and people/things mentioned within. While such computer algorithms are imperfect, the results nonetheless provide a telling lens for examining what’s discussed in the news.

How might this vast database of topics and people be used to understand how similar or different these television news outlets are? One simple way of comparing them is to compile a ranked list of what’s mentioned on each channel or network over the past decade, filtering for just those entries that have their own Wikipedia pages (thus narrowing the filter to the most “notable” entries) and that were mentioned at least 10 times over the last 10 years. The lists were then compared against each other using a Pearson correlation, which measures how similar they are from 0 to 1 — with the closeness to 1 indicating the greatest similarity. The resulting table can be seen below. (Click to enlarge.)

CNN, MSNBC and Fox News are all highly correlated, meaning that over the past decade they have largely talked about the same things. Rather than entirely parallel universes, they represent different takes on the same overall shared universe of stories.

ABC, CBS and NBC evening news broadcasts are far less similar to their 24/7 peers and even to each other. One likely explanation is that their brief 30-minute timespan amplifies their editorial decisions of what stories to cover and that the impact of commercials is greater than on cable, given the smaller window of broadcast time.

BBC News is unsurprisingly the least similar to U.S. news outlets, with the numbers above changing little even with the table limited to the 2017-2019 period, reminding us that news is inherently local.

This raises the question of whether the similarities identified have changed in the Trump era.

The timeline below calculates the table above on a monthly basis (minus BBC News for clarity), plotting similarity over time. Over the past decade similarity among the channels was fairly stable until January 2017 (aside from a blip in 2014). The election of Donald Trump caused CNN and MSNBC’s correlation with Fox News to drop sharply, while CBS departed from ABC and NBC. These differences are relatively small, indicating that the outlets largely cover the same topics in the same proportions, but are clear enough that they reflect the media fracturing point to be Trump’s election.

What, more specifically, is driving the changes above?

The chart below shows a few of the differences, visualizing the percentage of airtime thus far in 2019 that ABC, CBS and NBC have devoted to several political topics. CBS is clearly an outlier, reinforcing the impression that there are systematic differences among the networks.

To discount the possibility that these changes were driven by some artifact of the AI process, the timeline below shows the correlation of the total universe of every word uttered in the closed captioning of CNN, MSNBC and Fox over the past 10 years. Since this is based on all captioned words (including articles or pronouns like “the” and “me”), it captures even subtle shifts in overall word usage.

When looking at all words, rather than just major topics and people/things, it is clear that the outlets are exceptionally similar, with the difference between the three news channels being less than 0.005. While such a minute difference would typically be statistically insignificant, the fact that the same sharp deviation is seen between Fox News and its peers beginning in January 2017 reinforces that this represents a genuine point of separation, rather than some artifact of the AI processing.

Putting this all together, the graphs above reinforce that there are very real systematic differences in the coverage we see across the media landscape and that there has been a genuine fracturing of the media since Donald Trump’s election. At the same time, that divide is still small, meaning that rather than entirely disjointed pictures, news outlets present different takes on the same shared universe of stories.

RealClear Media Fellow Kalev Leetaru is a senior fellow at the George Washington University Center for Cyber & Homeland Security. His past roles include fellow in residence at Georgetown University’s Edmund A. Walsh School of Foreign Service and member of the World Economic Forum’s Global Agenda Council on the Future of Government.