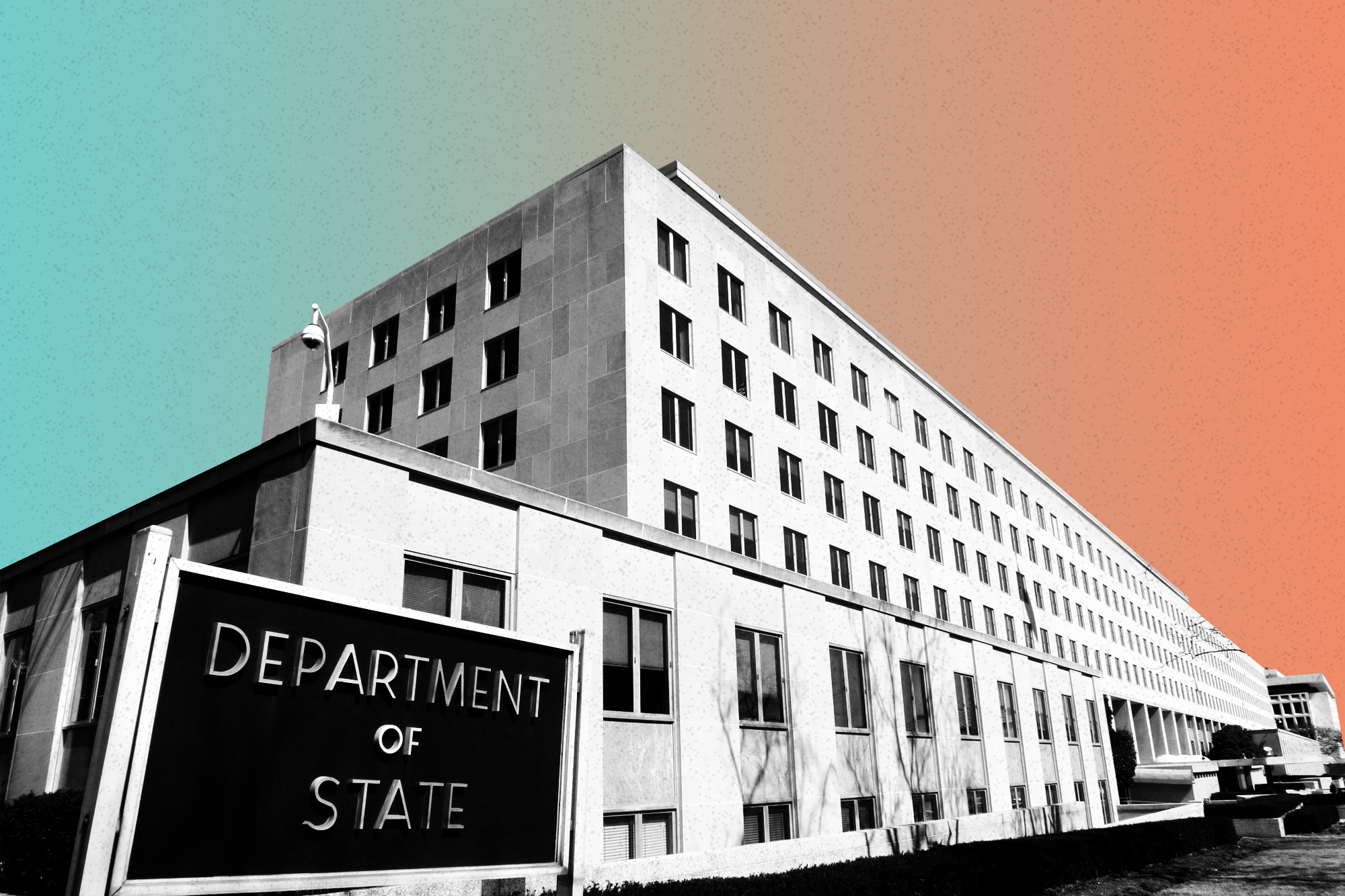 The survey didn’t measure government employees’ thoughts about Trump, but it did raise serious questions about the people he’s put into place. The dominant factor in the decline across the government was a drop in employee perception of “effective leadership” at senior levels of their agency or department.

“The No. 1 driver for the engagement scores is leadership,” said Max Stier, president and CEO of the Partnership for Public Service, a nonprofit that studies the executive branch and partners with management consulting firm Boston Consulting Group each year to analyze the survey results.

Their survey of the career workforce, which has been published annually for 17 years, measures how “engaged” employees are with the mission of their agencies where they work, from behemoths like the Departments of Defense and Homeland Security to small entities like the National Gallery of Art.

Stier said he was surprised that there wasn’t an even larger decline in this year’s survey, which was conducted between May and July, just a few months after federal workers experienced the longest government shutdown in history. Still, he notes, the federal workforce overall continues to lag well behind the private sector, with the average morale of federal employees coming in 15 points below private-sector employees on the survey’s engagement scale.

The news isn’t all bad for agency managers, by any means. NASA, which sits atop the rankings of large agencies, continuing an eight-year streak of steady increases in levels of employee engagement. The Department of Health and Human Services, Federal Trade Commission and the Peace Corps also have high employee engagement.

But the survey also shows areas where a decline in government performance could be a significant concern, including relatively low employee satisfaction at some of the federal agencies charged with keeping Americans safe or providing vital services. Those include the Department of Homeland Security, Department of Agriculture, the Air Force and Social Security Administration, which were the lowest-ranked large agencies.

The very lowest score among mid-size agencies was at the Department of Education, where Secretary Betsy DeVos has taken unpopular measures like curtailing teleworking and has been engaged in an ongoing battle with the employee union. The agency saw a drop in employee morale for the fourth year in a row, with the dominant factor a drop in how employees scored the effectiveness of the agency’s leadership, including senior officials, according to the data.

“Secretary DeVos is committed to putting students first, right-sizing the Department, and being a good steward of taxpayer dollars,” said department spokesperson Angela Morabito. “To fulfill that commitment, she has made significant changes to the way the Department operates, which can be particularly challenging for those accustomed to the status quo.”

The Justice Department’s score fell for the fourth straight year, dropping from third out of 17 large agencies in 2015 to 12th this year. Morale at the FBI, which is traditionally somewhat higher than average, has fallen four years in a row and is now below the median of other agencies. The biggest dips at the FBI over the past year were in how employees viewed their immediate supervisor and their satisfaction with pay.

Most federal agencies are vast and complicated, so the top-line figures can obscure problems at individual components. For example, morale at the State Department ticked slightly upward after two years of decline since 2016. But, at the same time, morale in the office of Secretary of State Mike Pompeo plummeted nearly 9 points, ranking among the lowest of all federal agency subcomponents, driven by drops in how employees rated the effectiveness of leadership and teamwork. By contrast, the State Department’s diplomatic security and law enforcement branches saw significant increases in morale, as did the division that trains diplomats.

Morale among the federal workers on the front lines of the opioid epidemic at the Substance Abuse and Mental Health Services Administration declined for the second year in a row. The largest drop for that agency, a part of HHS, came from a measure of how well employees feel their skills are used effectively and match the agency’s mission.

Morale among employees at the DHS office dedicated to fighting weapons of mass destruction was the very lowest of any of the 420 agency subcomponents covered by the survey. Reports earlier this year that the Trump administration had quietly scaled back counterterrorism programs in that unit, the Countering Weapons of Mass Destruction Office, drew bipartisan concerns.

The decreases across other parts of the DHS bureaucracy were all driven by different factors. At FEMA, employees reported lower work-life balance. Transportation Security Administration workers were less satisfied with pay and performance-based rewards. And Immigration and Customs Enforcement workers reported less satisfaction with the agency’s senior leadership.

While some agencies plagued by scandal or controversy saw drops in their employee engagement, others experienced what the Partnership for Public Service refers to as “workforce resilience.”

The Intelligence Community, for instance, a composite score of the nation‘s intelligence agencies, ticked up 3.6 points in overall morale and was among one of the top-ranked large agencies. Morale among employees of the Consumer Financial Protection Bureau, which in 2018 had dueling chiefs at one point amid a legal fight over who ran the agency, improved by nearly 7 points in 2019. At the Environmental Protection Agency, where employees were surveyed roughly a year after the departure of Administrator Scott Pruitt amid a series of investigations into ethical lapses, morale shot up by nearly 3 points.

The data for the Partnership for Public Service’s annual rankings and analysis of the morale of federal workers, which is produced with the Boston Consulting Group, comes from the Federal Employee Viewpoint Survey, which is administered by the Office of Personnel Management at some agencies while others poll their employees using their own survey. In total, this year’s data captures the views of more than 883,000 federal employees, excluding political appointees, in agencies and subcomponents with at least 100 employees.

Among other findings by the survey:

—The largest decline in employee engagement at large agencies was at the Department of Agriculture, which saw a 2.5 percent drop. Secretary Sonny Perdue has imposed strict limits on teleworking and announced plans to move two major research offices from Washington to the Kansas City area. Those two branches—the Economic Research Service and the National Institute of Food and Agriculture—plummeted on the survey by 30.1 points and 24.1 points, respectively.

—The Intelligence Community saw the largest gains among large agencies in terms of how workers rated the effectiveness of leadership.

—The Department of Transportation had the steepest drop among large agencies in how employees assessed effective leadership. Overall, morale among employees fell the sharpest in the office of the secretary, led by Elaine Chao, compared with declines in other parts of the agency.

—Employees in the Federal Energy Regulatory Commission’s office of general counsel had the highest work-life balance score among all agency subcomponents; the DHS weapons of mass destruction office had the lowest.

—The civil rights office at the USDA was the lowest-ranked agency subcomponent in terms of how much employees believe that their management promotes and respects diversity. That score, which declined by more than 6 points this year, was among a handful of low-rated metrics for the office.

The Federal Employee Viewpoint Survey, which is administered by OPM each year, asks questions about how employees view their jobs and agencies and includes questions as seemingly mundane as office noise levels to more serious concerns like whether employees can report problems without fear of reprisal. Many of the 71 questions focus on things like how much training is available to employees and the quality of the agency’s leaders. Agencies who don’t take part in the OPM survey conduct similar surveys with identical questions, and those are aggregated in the Partnership analysis.

The partnership provided POLITICO with early access to data that drilled into the factors driving morale across 490 individual agencies and departments across the federal government. In total, this year’s data captures the views of more than 883,000 federal employees, excluding political appointees, in agencies and subcomponents with at least 100 employees. The nonprofit considers engagement to a be key way to measure whether the public is getting value for money, with employees who come to work connected with their mission.

“This is not about happy employees,” Stier said. “This is about government performance.”