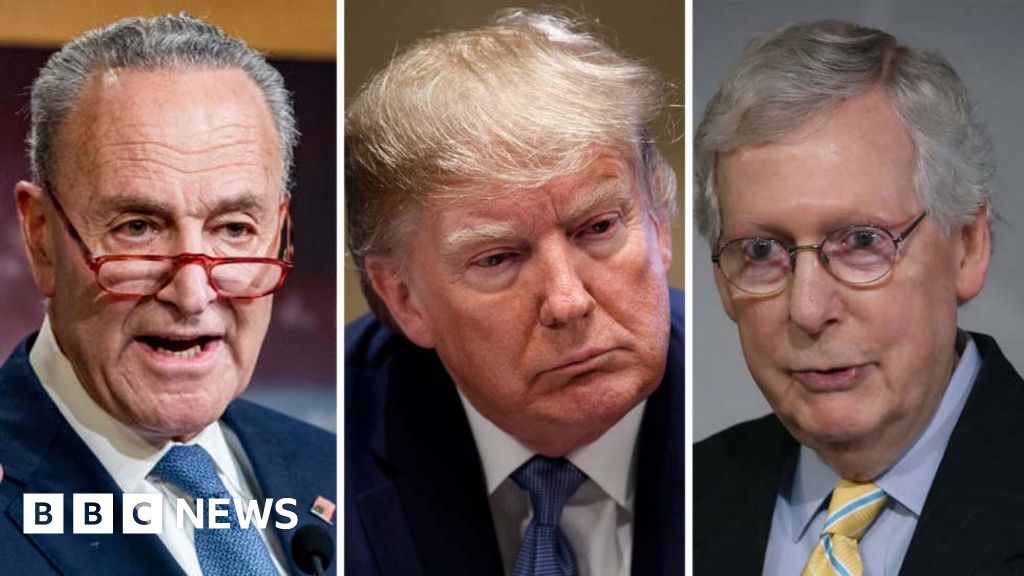 The US House of Representatives is preparing to vote on impeaching President Donald Trump. With Democrats controlling the lower chamber, the move is expected to pass – setting the stage for the third-ever Senate impeachment trial.

Here’s what you need to know before the trial of President Trump begins.

Why is there a trial?

A trial in the Senate will follow the vote to impeach the president in the House, as decreed in the Constitution.

The House’s articles of impeachment level two accusations against the president: that he solicited a foreign country to help him politically and that he obstructed Congress. The Republican president has denied any wrongdoing, calling the inquiry a “witch hunt”.

Mr Trump is accused of withholding millions in military aid to Ukraine and a White House meeting with Ukraine’s president as bargaining chips to push Ukraine into investigating his Democratic rival Joe Biden. Democrats say this amounts to an abuse of presidential power.

As the White House refused to allow staff to testify during impeachment hearings in the House, Democrats have also accused Mr Trump of obstructing Congress.

The Constitution is admittedly vague when it comes to impeachment – simply mandating that the House has the “sole power of impeachment”, acting as grand jury and bringing charges. The Senate is given “the sole power to try all impeachments” and convict a president of “treason, bribery or other high crimes and misdemeanours”.

There are general rules largely based on President Andrew Johnson’s trial, but ultimately, Republican leader Mitch McConnell and his Democratic counterpart Chuck Schumer will have to determine the guidelines for evidence, witnesses, duration and arguments.

While Mr McConnell has the final say over the format as the Republican Senate leader, he could find his options limited if Democrats pressure moderate Republicans to vote with them on any changes to the rules. At any point, senators can call for votes on trial procedures that would need a simple majority to pass.

After lawmakers hear from both sides – House prosecutors and White House counsel – and any witnesses, they will be given a full day to deliberate before a vote on conviction is held.

A two-thirds majority is required to convict and oust Mr Trump. Given that Republicans control the 100-seat chamber with a 53-47 majority, the president is widely expected to be acquitted.

Supreme Court Chief Justice John Roberts will preside over the trial in the Senate, but the senators ultimately will act as both judge and jury.

Justice Roberts is there to make sure the trial adheres to the predetermined rules, but if any vote during the trial ends in a tie, he have the final say.

House Speaker Nancy Pelosi will also select a group of Democrats to act as impeachment managers – essentially prosecutors for the House. These lawmakers will present the lower chamber’s case for impeachment to the Senate.

During Bill Clinton’s impeachment trial, Republicans had 13 such managers; staunch Trump ally Lindsey Graham was one.

Mr McConnell, the majority leader, will ultimately have sway over the format and guidelines of the trial.

He sparked condemnation from Democrats over recent comments to Fox News, saying: “Everything I do during this, I’m coordinating with the White House counsel. There will be no difference between the president’s position and our position as to how to handle this to the extent that we can.”

Will senators get to ask questions?

Senators can ask questions of witnesses or counsellors, but only by submitting them in writing to Justice Roberts.

Witnesses may not necessarily appear on the Senate floor. They can be interviewed by a committee of lawmakers with footage of the testimony aired during the trial instead.

But there may not be any witnesses at all if Republicans decide they would rather keep the trial short, despite Mr Trump’s calls for the Bidens and the whistleblower who sparked the Ukraine inquiry to appear.

Will Trump give evidence?

While the president could choose to appear before the Senate himself, it is much more likely he will have White House lawyer Pat Cipollone speak on his behalf.

Mr Cipollone, like the impeachment managers, will be able to question witnesses and deliver opening and closing statements.

US media report Mr Trump may also bring some House conservatives onto his defence team, like Ohio congressman Jim Jordan or John Ratcliffe of Texas.

Will Biden or his son have to testify?

That will depend on what Mr McConnell chooses for the trial format. US media report Republicans are still debating if it is worth it to summon the Democratic former vice-president and his son as the president wants.

Mr Biden has dismissed calls for his testimony, telling NPR it is an attempt by the president to “divert attention” from the accusations against him.

“This is a Trump gambit he plays,” Mr Biden said. “I will not yield to what everybody is looking for here. And that is to take the eye off the ball.”

After the House presents the articles of impeachment to the Senate, they must consider them in session every day, except Sunday, until the final decision.

Mr Schumer has offered a tentative schedule for the trial, which would be the first order of business in the new year. In total, he has suggested some 126 hours of proceedings.

The trial is likely to take weeks but how many is anybody’s guess. Democrats will hope it is all done by the time the 2020 primary elections begin in February.