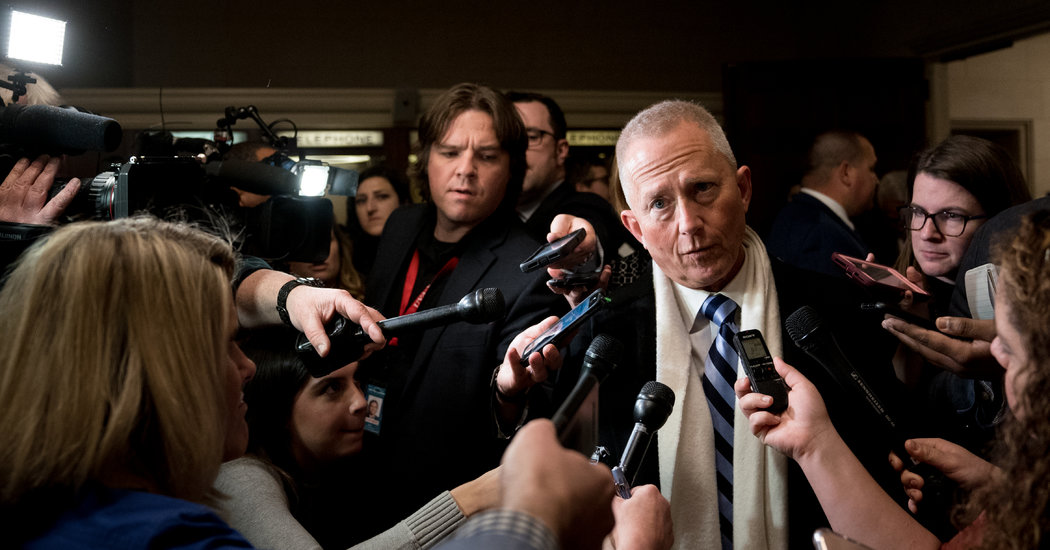 TRENTON, N.J. — When Representative Jeff Van Drew, a moderate Democrat who has staunchly opposed impeaching President Trump, decided to jump to the Republican Party, he got Mr. Trump’s encouragement and blessing.

There was even talk of an official announcement at the White House, right before or after the House votes on impeachment.

But back home in New Jersey, Mr. Van Drew, who faces re-election next year, received quite a different reception: He has quickly become anathema to people on both sides of the political divide.

Some Republicans described him as an opportunist who was making a craven bid to protect his seat in a district that Mr. Trump won. At least two Republicans who were already running for the seat said in interviews that they intended to remain in the race and work to defeat him.

“This is the end of his career,” said David Richter, a Republican businessman who has been campaigning for Mr. Van Drew’s seat since August and referred to him as a “weasel.”

Another Republican in the race, Brian Fitzherbert, who works for a defense contractor, was equally critical.

Democrats were even more scathing. Nearly all of Mr. Van Drew’s Washington staff abruptly resigned over the weekend.

“Sadly, Congressman Van Drew’s decision to join the ranks of Republican Party led by Donald Trump does not align with the values we brought to this job when we joined his office,’’ according to a letter from five staff members. Two other staff members also resigned.

Mr. Van Drew, who hails from a Republican-leaning district that for 24 years before his election was represented by a Republican, is one of only two Democrats who voted against rules laying out the impeachment process.

Mr. Van Drew has not spoken publicly since reports emerged over the weekend that he was switching parties. But in an interview with Tucker Carlson on Fox News several weeks ago, Mr. Van Drew said Mr. Trump would likely survive an impeachment process given Republican control of the Senate and that voters, not Congress, should decide Mr. Trump’s fate.

“At the end of the day, I’m afraid all we’re going to have is a failed impeachment,” he said, adding: “The bottom line is he’s still going to be the president of the United States, and the bottom line is he is still going to be the candidate of the Republican Party. So why don’t we let the people do the impeachment by voting in the electoral process the way that we usually do.”

Senior advisers to Mr. Trump have assured Mr. Van Drew that he would have the president’s support in the primary.

Assemblyman Jon Bramnick, a Republican who is the minority leader said, “I’ll take as many new Republicans as I can get in New Jersey.”

Multiple Republicans in Congress also made it known to Mr. Van Drew that once he became a member of the party, he would be supported in his re-election efforts.

“I want to tell Jeff Van Drew that he is welcome in the Republican Party, not just by me, but by our conference,” Representative Kevin McCarthy of California, the minority leader, said in an interview on Fox News on Saturday.

Congressional Republicans have also reached out to Mr. Van Drew in recent days to offer him advice on hiring new staff members.

Mr. Van Drew had been a prime target of congressional Republicans in their quest to take back the House.

His decision is certain to become a dominant issue next year and could energize Democrats in the district who helped elect him last year when a progressive surge flipped four congressional seats across New Jersey. The district stretches from Atlantic City west to the Pennsylvania border.

On Monday, Brigid Harrison, a professor of political science at Montclair State University who had been taking steps toward challenging Mr. Van Drew as a Democrat in a primary, said that she, too, would run to replace him.

“I think he’s a traitor,” said Professor Harrison. “I think it is something that is emblematic of the cynicism of our country.”

Professor Harrison said she had met with Democratic county leaders in the district, who had declined to sign a letter backing Mr. Van Drew for re-election and criticized his anti-impeachment stance.

Mr. Richter, 53, said he had no plans to step aside to clear an easy path to the Republican nomination for Mr. Van Drew.

“I’m in this thing all the way through,” said Mr. Richter, a former chief executive of a publicly traded construction management firm, Hill International, who personally contributed $300,000 of the $413,000 his campaign raised during the first quarter.

Mr. Richter added that any support Mr. Trump offered Mr. Van Drew, in exchange for the distraction a high-profile Democratic defection could offer in a week when the president faces impeachment, would quickly fade once Mr. Trump had “gotten what he wanted.”

Mr. Richter added that he had “talked to a lot of Republicans. Nobody is happy about the switch.”

John Farmer Jr., director of the Eagleton Institute of Politics at Rutgers University, called the contest for the seat a “wide-open race” that would likely depend on how much the president was willing to help Mr. Van Drew.

As for whether Republican voters would embrace Mr. Van Drew after the switch, Mr. Farmer said, “I imagine it’s a difficult adjustment for people to suddenly view him as an ally.”

Other Republicans were reluctant to openly criticize Mr. Van Drew, saying they would defer to Mr. Trump’s views on the representative.

“The eyes of the nation are on this story and it is important that our response and reaction to it, be measured, coordinated, unified and respectful,” said Mike Testa Jr., who was elected in November to Mr. Van Drew’s former State Senate seat and who is a chairman of Mr. Trump’s re-election effort in New Jersey. “After discussions with our municipal leaders and those in Washington, we have mutually agreed to follow President Donald J. Trump’s lead on this issue.”

Mr. Van Drew has long had a difficult relationship with Democrats in New Jersey over some of the positions he took while in the State Senate, including opposing raising the minimum wage.

One of New Jersey’s most powerful Democrats, Stephen M. Sweeney, the Senate president, said the party would mount a major effort to oust Mr. Van Drew. And the head of the Democratic Congressional Campaign Committee, Representative Cheri Bustos of Illinois, offered jobs to the members of his congressional staff who had quit “to stand up for their Democratic values.”

If Professor Harrison, who lives in Mr. Van Drew’s district, wins the support of established Democratic Party leaders there, she may face a primary challenge of her own.

Amy Kennedy, a mental health advocate who is married to former Representative Patrick J. Kennedy, a Democrat, said she was forming an exploratory committee, according to The Press of Atlantic City. Mr. Kennedy is the youngest child of Edward M. Kennedy.

On Monday, constituents at a Wawa convenience store in Vineland, N.J., had mixed reactions to Mr. Van Drew’s move.

“As long as he does what he thinks is the right thing, it doesn’t matter what party he is aligned with,” said Bill Crane, 65, who is not registered to vote with any political party and who did not vote for Mr. Van Drew in the last election.

“I don’t like the idea when they just blindly follow the party line,” added Mr. Crane, a roofing contractor who lives in Vineland.

But David Dunham, 65, who is not registered with either major party but voted for Mr. Van Drew, said he felt “misled” by his representative’s decision.

“He was elected as a Democrat,” Mr. Dunham, of Millville, N.J., said, “and for some reason he seems to have aligned himself with Trump, and he should have advertised that when he was elected.”