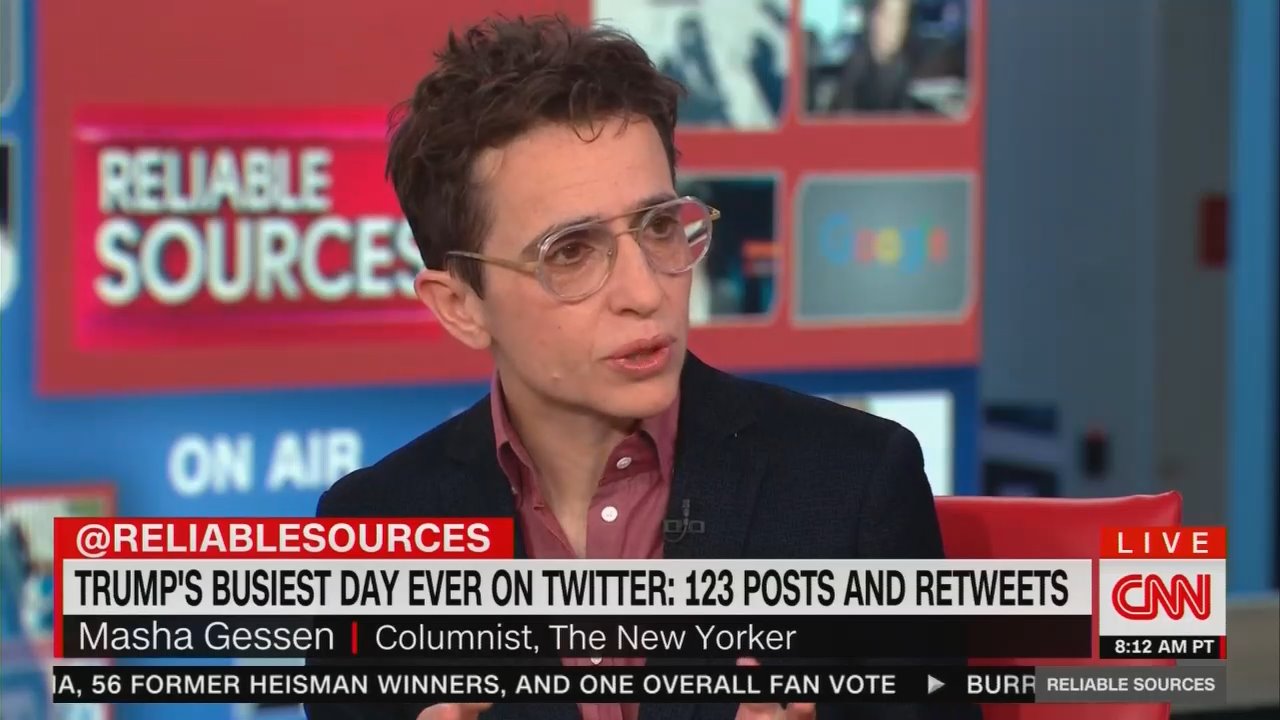 During an appearance on Sunday’s Reliable Sources, New Yorker columnist Masha Gessen expressed horror that “reasonable people can disagree” about whether President Trump deserved to be impeached, describing that notion as “absolutely terrifying.” Throughout the entire segment, Gessen and other members of the panel demonstrated hostility towards the idea of any disagreement on the impeachment issue and described assertions that Ukraine interfered in the 2016 presidential election as “conspiracy theories” that have been “backed up by a Russian disinformation campaign.”

The discussion began with Stelter asking Gessen “what is different about this time versus the Nixon years, the Clinton years? Is it the conspiracy theory thinking that has dominated this entire scandal?” Maybe Stelter forgot but “conspiracy theory thinking” played a major role in the Clinton impeachment; with then-First Lady Hillary Clinton coining the term “vast right-wing conspiracy” in an effort to dismiss the allegations of wrongdoing against her husband.

Inside this bubble, there can be no honest statement against the radical view that Trump must be removed as soon as possible. Any disagreement is described as “deliberate deception” and “disinformation.”

Gessen’s comment came after Mark Lukasiewicz, former NBC News executive and Dean of the Hofstra University School of Communication, suggested that those who differ from the “consensus” view about the facts surrounding the Trump impeachment case should not have a voice on legacy media outlets: “There are two competing worldview realities…We do a disservice when we serve those up.” As he attempted to make the case that the other side did not deserve to be heard, Lukasiewicz accused CNN analyst Rick Santorum of “gaslighting” and “trying to sow deep, deep, deep confusion in the American public about what is actually going on in the world.”

Lukasiewicz had previously objected to host Brian Stelter’s use of the term “theories” to describe the allegations of Ukrainian interference in the 2016 presidential election, instead preferring to refer to that narrative as a “disinformation campaign.” According to Lukasiewicz, “one of the failings of our contemporary media” is the hesitancy to describe the aforementioned theory as “deliberate deception” and “fabrication.” Lukasiewicz also contended that “calling it a conspiracy theory lends it a certain credibility.”

For the rest of the segment, panelists reminisced about the good old days when the “whole alternate reality” of Fox News did not exist. The self-proclaimed guardians of the First Amendment really miss having a monopoly in the media.

A transcript of the relevant portion of Sunday’s edition of Reliable Sources is below. Click “expand” to read more.

BRIAN STELTER:  Masha, what is different about this time versus the Nixon years, the Clinton years? Is it the conspiracy theory thinking that has dominated this entire scandal? Is that what’s different this time?

MASHA GESSEN: I think that’s part of it. But I think the bigger part of it is that, you know, I think in previous impeachments, we had the sense that everyone involved lived in the same reality. Everybody was on the same planet. And, you know, there could be a discussion of what actually happened. And once you landed on what actually happened, that meant something, right? Here, we have been witnessing, you know, two non-overlapping realities, in a couple of different ways. One is that in, you know, in a sense, in the entire impeachment inquiry there has been no disagreement about facts. The facts were known up front, right? We had the…the readout of the phone call…

STELTER: Thanks to Trump.

GESSEN: …before any of this began, right? So, in a way, it was an investigation. It was an argument about interpretation, which actually makes it a little bit different from other Trumpian events, right?

GESSEN: Is that we weren’t arguing about facts. It was, you know, and…and the argument sort of still continues. In one universe, this is an impeachable offense, this is outrageous, this is almost unthinkable. In another universe, it’s like whatever.

GESSEN: Yeah. It’s Wednesday and there’s so much else going on including Ukraine. And this is where I think all of this, you know, right-wing media din comes in. Its function is not so much to create a different narrative. Its function is just to say, you know, nothing is true. Anything is possible. What are you talking about when there’s something else to talk about?

STELTER: And when we say conspiracy theories, the idea that anything could be true, Mark, I think it’s important to note that the Ukraine theories that I was describing, they’re not just conspiracy theories. They’ve been backed up by a Russian disinformation campaign…

STELTER: …to try to confuse people about what actually happened in 2016.

LUKASIEWICZ: Brian, listen, I object to the idea that we even call them theories. Relativity is a theory. A theory is a hypothesis that can be reasonably proven over time. This is a disinformation campaign. It’s deliberate deception. It’s fabrication. And I think one of the failings of our contemporary media and it’s a difficult challenge is that we’re not calling that out enough. Just calling it a conspiracy theory lends it a certain cred…credibility. And I think what Masha has talked about so provocatively and so well, these irreconcilable realities that the country now lives, you know, we talk about polarization. It’s deeper than polarization. There are two competing world view realities. And they are…we do a disservice when we serve those up. I have to tell you on…on this very network.

LUKASIEWICZ: Well, on this very network not very long ago, former Senator Rick Santorum, a paid analyst of this network, sat on camera and told the CNN audience that when the President uttered the words, “I would like you to do us a favor, though,” he wasn’t asking for a favor. He said that repeatedly, literally those words. Well, that’s gaslighting. That’s trying to sow deep, deep, deep confusion in the American public about what is actually going on in the world. And that…that takes us to a very dangerous place….

STELTER: Right. Masha, final thought on what to expect in the week ahead, how this is all going to be perceived when the vote happens on Wednesday?

GESSEN: You know, what worries me the most, actually, is that I think that since…since about a week ago, when we saw the legal experts testifying in…in, in Congress, I think we’ve been in new territory which is the sense that reasonable people can disagree about whether he…he should be impeached.

GESSEN: I think this was…this was Turley’s testimony in…in, in the Judiciary Committee. But I find it absolutely terrifying, right? And that…and I…and I…and I see that, you know, Trump is actually positioning himself to the sort of, to the.…to the fringes. Right? But you don’t have to believe Trump’s tweets in order to be a reasonable person who thinks that maybe we shouldn’t have rushed with impeachment. Maybe we should have listened, heard witnesses, you know, who are stone…stonewalling who had firsthand knowledge, et cetera, et cetera. I think this is absolutely terrifying. I think we’re going to be see…seeing more of that kind of morass.

STELTER: To the panel, thank you.