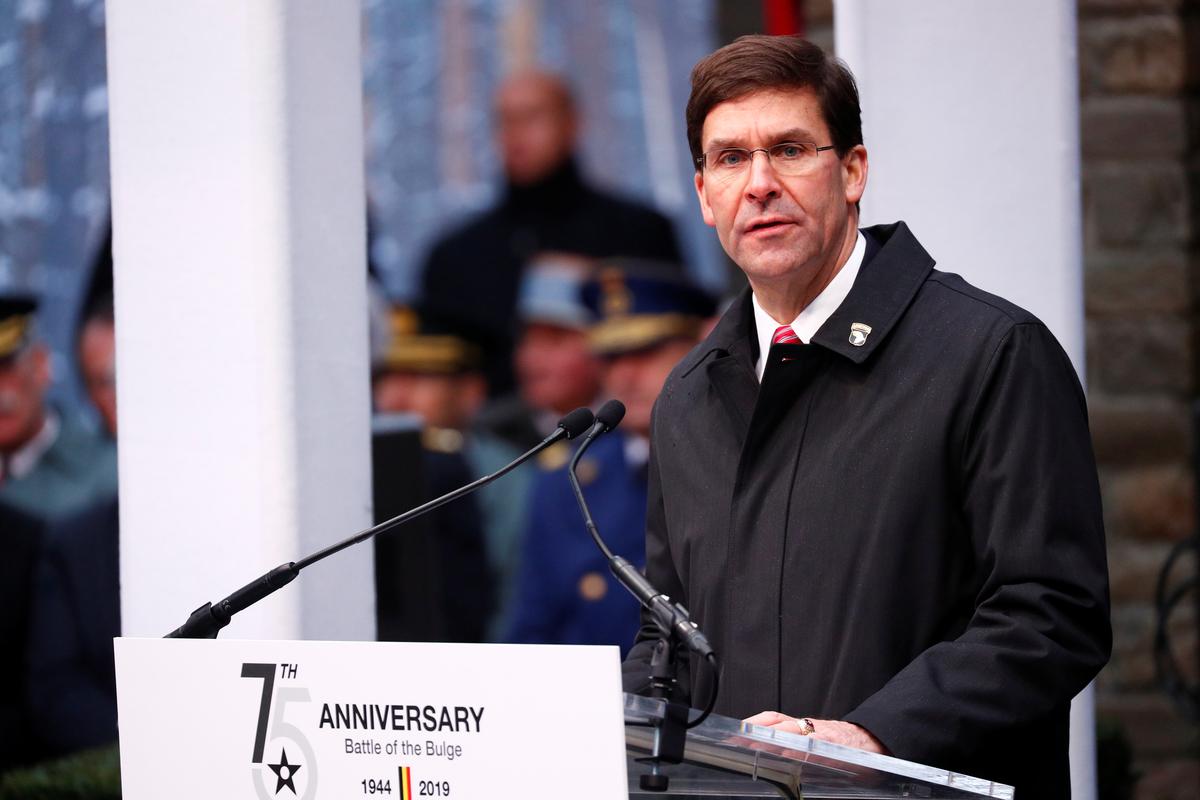 ABOARD A U.S. MILITARY AIRCRAFT (Reuters) – U.S. Defense Secretary Mark Esper said on Monday that he needed to speak with his Turkish counterpart to understand how serious President Tayyip Erdogan was when he said he could shut down the Incirlik air base, which hosts U.S. nuclear warheads.

FILE PHOTO: U.S. Defense Secretary Mark Esper delivers a speech during a commemoration ceremony for the 75th anniversary of the Battle of the Bulge at the Mardasson World War II memorial monument in Bastogne, Belgium December 16, 2019. REUTERS/Francois Lenoir

Erdogan’s warning on Sunday that he could close Incirlik came in response to threats of U.S. sanctions and a separate U.S. Senate resolution that recognised mass killings of Armenians a century ago as genocide.

“It has not been brought up to me before. The first I heard of it was reading it in the papers as you just mentioned and so I need to talk to my defence counterpart to understand what they really mean and how serious they are,” Esper told reporters.

Turkey could also close the Kurecik radar base, Erdogan added on Sunday.

Esper said that if Turkey was serious about closing down the Kurecik base, it would have to be discussed by NATO.

“They are a sovereign nation to begin with, so they have that inherent right to house or to not house NATO bases or foreign troops,” Esper said.

“But again, I think this becomes an alliance matter, your commitment to the alliance, if indeed they are serious about what they are saying.”

Last week, the U.S. Senate unanimously passed a resolution that recognises as a genocide the mass killings of Armenians a century ago, a historic move that infuriated Turkey and dealt a blow to the already problematic ties between Ankara and Washington.

The U.S. Congress has been united in its opposition to Turkey’s recent policy actions. Republican senators have been incensed with Turkey’s purchase of the Russian S-400 missile system, which the United States says poses a threat to its F-35 fighter jets and cannot be integrated into NATO defences.

They have also moved to punish Turkey over its Oct. 9 incursion into Syria. A U.S. Senate committee backed legislation on Wednesday to impose sanctions on Turkey, pushing President Donald Trump to take a harder line on the issue.

“I think the issue here is once again what is Turkey’s direction with regard to the NATO alliance and the actions they are taking on any number of issues,” Esper said.

NATO diplomats worry that Turkey, a NATO member since 1952 and a critical ally in the Middle East, has increasingly acted unilaterally.