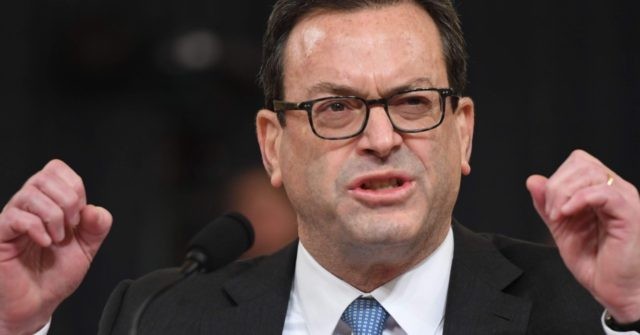 The House Judiciary Committee’s final report accompanying its articles of impeachment misquotes President Donald Trump — again — talking about his powers under Article II of the Constitution.

As Breitbart News reported during the Judiciary Committee’s hearings earlier this month, Democrats repeatedly misquoted Trump as claiming that Article II of the Constitution entitles him to do “whatever I want” as president.

The context of Trump’s remark, which he has made several times, was clearly his power under Article II to hire and fire executive branch employees, specifically Special Counsel Robert Mueller, who was investigating so-called “Russia collusion.”

Yet Democrats — including Judiciary Committee counsel, and Democrat donor, Barry Berke — played deceptively-edited video of Trump that suggested, falsely, he believed he had absolute power under Article II of the Consitution.

Democrats played a clip of the July 23 speech in which Trump said: “Then I have an Article II, where I have the right to do whatever I want as president.” One of the Democrats’ legal “expert” witnesses, Harvard Law School professor Noah Feldman, was asked to react to that statement, and he declared: “[A]s someone who cares about the Constitution, the second of those in particular struck a kind of horror in me.”

But Trump’s full remarks, in context — delivered the day before Mueller was to testify before both houses of Congress — were as follows (emphasis added):

… 500 subpoenas. They did everything. Their collusion? No collusion. They have no collusion [Applause] Then I have an Article II, where I have the right to do whatever I want as president, but I don’t even talk about that. Because they did a report and there was no obstruction. After looking at it, our great Attorney General read it, he’s a total professional, he said, “There’s nothing here, there’s no obstruction.” So they referenced, no obstruction. So you have no collusion, no obstruction. And yet it goes on. And they think this is helping them. I personally think it’s hurting them. A lot of people think it’s very bad for them. But it just goes on. But I wrote something out this morning on a thing called Twitter, whether we like it or not [Applause] it is a good way of getting the word out. Because I saw Mueller was testifying, yeah.

[W]e consider President Trump’s claim that his actions are protected because of his right under Article II of the Constitution “to do whatever I want as president.” This claim is wrong, and profoundly so, because our Constitution rejects pretensions to monarchy and binds Presidents with law. That is true even of powers vested exclusively in the chief executive. If those powers are invoked for corrupt reasons, or wielded in an abusive manner harming the constitutional system, the President is subject to impeachment for “high Crimes and Misdemeanors.” This is a core premise of the impeachment power.

Not only does the report misquote him, but it claims his statement is an impeachable offense. The report repeats the misquote later:

President Trump was equally mistaken when he declared he had “the right to do whatever I want as president.” The Constitution always matches power with constraint. That is true even of powers vested exclusively in the chief executive. If those powers are invoked for corrupt reasons, or in an abusive manner that threatens harm to constitutional governance, the President is subject to impeachment for “high Crimes and Misdemeanors.”

The report repeats the misquote two more times in making the argument for impeachment.

The House is expected to vote on impeachment Wednesday.