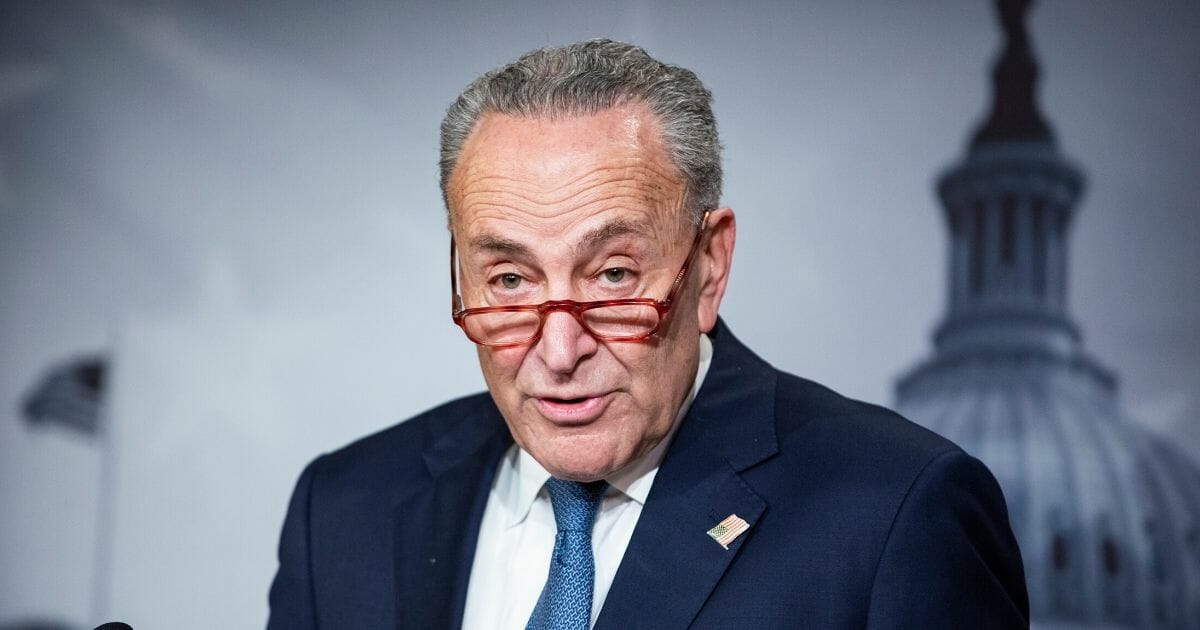 Senate Minority Leader Chuck Schumer is calling for new witnesses to testify during an anticipated impeachment trial in January; however, in 1999 during President Bill Clinton’s trial, the New York senator voted that no new witnesses come forward and no new evidence be presented.

In January 1999, Schumer, a recently elected senator from New York, cast one of his first votes to dismiss the impeachment case against Clinton and against a motion to subpoena witnesses, the Washington Examiner reported.

“I wonder if the House managers aren’t a little more interested in political theater than in actually getting to the bottom of the facts,” Schumer said on CBS at the time, regarding his objection to calling witnesses at Clinton’s trial.

In a letter to Senate Majority Leader Mitch McConnell on Sunday, Schumer took the opposite view.

“Senate Democrats believe strongly, and I trust Senate Republicans agree, that this trial must be one that is fair, that considers all of the relevant facts, and that exercises the Senate’s ‘sole Power of Impeachment’ under the Constitution with integrity and dignity,” he wrote.

“The trial must be one that not only hears all of the evidence and adjudicates the case fairly; it must also pass the fairness test with the American people.”

Later in the letter, Schumer noted that House managers who argued the impeachment case against Clinton during the Senate trial were able to call witnesses.

With that in mind, the minority leader said he would like to subpoena acting White House chief of staff Mick Mulvaney, Mulvaney’s adviser Robert Blair, former National Security Adviser John Bolton, and Associate Director for National Security for the Office of Management and Budget Michael Duffey.

The four were subpoenaed but did not testify before the House-led impeachment inquiry after the White House claimed executive privilege. Democrats chose not take the matter to court, citing concerns it would delay their impeachment proceedings too much.

Do you think Schumer’s call for new witnesses is hypocritical?

Schumer also proposed “that the Senate issue subpoenas for a limited set of documents that we believe will shed additional light on the administration’s decision-making regarding the delay of security assistance funding to Ukraine and its requests for certain investigations to be announced by the government of Ukraine.”

“Trials have witnesses,” the minority leader told reporters on Capitol Hill on Monday afternoon. “To engage a trial without the facts coming out is to engage in a cover-up.”

“To conduct a trial without the facts is saying, ‘We’re afraid. We have something to hide,’” Schumer continued. “To just rehash the evidence presented in the House just doesn’t make any sense.”

The Democrat was pressed by CNN’s John Berman on Monday morning about the senator’s apparent flip-flop on calling witnesses at an impeachment trial for Clinton versus President Donald Trump.

Schumer contended that the Republicans, who held a 55 to 45 majority in the Senate in 1999, “could not negotiate a fair bunch of witnesses with the Democrats.”

RELATED: Here’s What a Senate Impeachment Trial Could Look Like If House Democrats Vote To Impeach the President

“The facts are much different here,” he explained. “That was about something that President Clinton did not as president, but as a human being, and a failing as a human being. This is about the president’s overreach of power.”

🚨📺 The Schumer standard: One set of rules for Democratic Presidents and another for Republican Presidents. ↓ pic.twitter.com/8knHGyyEE7

House Speaker Nancy Pelosi made a similar argument in September, which prompted former House Speaker Newt Gingrich to remind her that Clinton had committed a felony by perjuring himself during a sexual harassment suit brought against him.

“He ultimately lost his license to practice law,” Gingrich told Fox News at the time. “He had to pay a large sum to the woman that he had predatory behavior toward, who was by the way his employee in the state government.”

“Nancy Pelosi certainly wouldn’t suggest that predatory sexual behavior and committing a felony [is acceptable conduct by a president],” he continued.

Schumer’s call for new witnesses and evidence comes after both McConnell and Senate Judiciary Chairman Lindsey Graham of South Carolina said they would like to see a speedy trial.

In a Fox News interview late last week, McConnell said that the case against the president is “weak” and there is “zero chance” that the Senate will vote to remove him from office.

The Washington Examiner’s chief political correspondent Byron York highlighted the dichotomy between House Democrats’ claim that they have more than enough evidence to impeach the president, while Schumer contends they need more.

“There is some tension between House Democrats’ ‘abundance of evidence’ claims and Senate Democrats’ demand for new witnesses,” York tweeted on Monday. “Bottom line: House Democrats could have pressed for more evidence. They didn’t. Case is made; will now be sent to Senate.”

There is some tension between House Democrats’ ‘abundance of evidence’ claims and Senate Democrats’ demand for new witnesses. Bottom line: House Democrats could have pressed for more evidence. They didn’t. Case is made; will now be sent to Senate.https://t.co/JTwg2pLq4L

He added, “Democrats are paying a price for their haste to impeach. They didn’t go to court to compel testimony, but now they want witnesses they didn’t hear to appear magically and testify before Senate.”

York tweeted, the “Democratic pre-trial trolling strategy already clear. We need new witnesses! What does Mitch McConnell have to hide? What are they afraid of? New witnesses, new evidence. Americans deserve the whole story. (Except for ‘distractions’ like Hunter Biden or whistleblower.)”