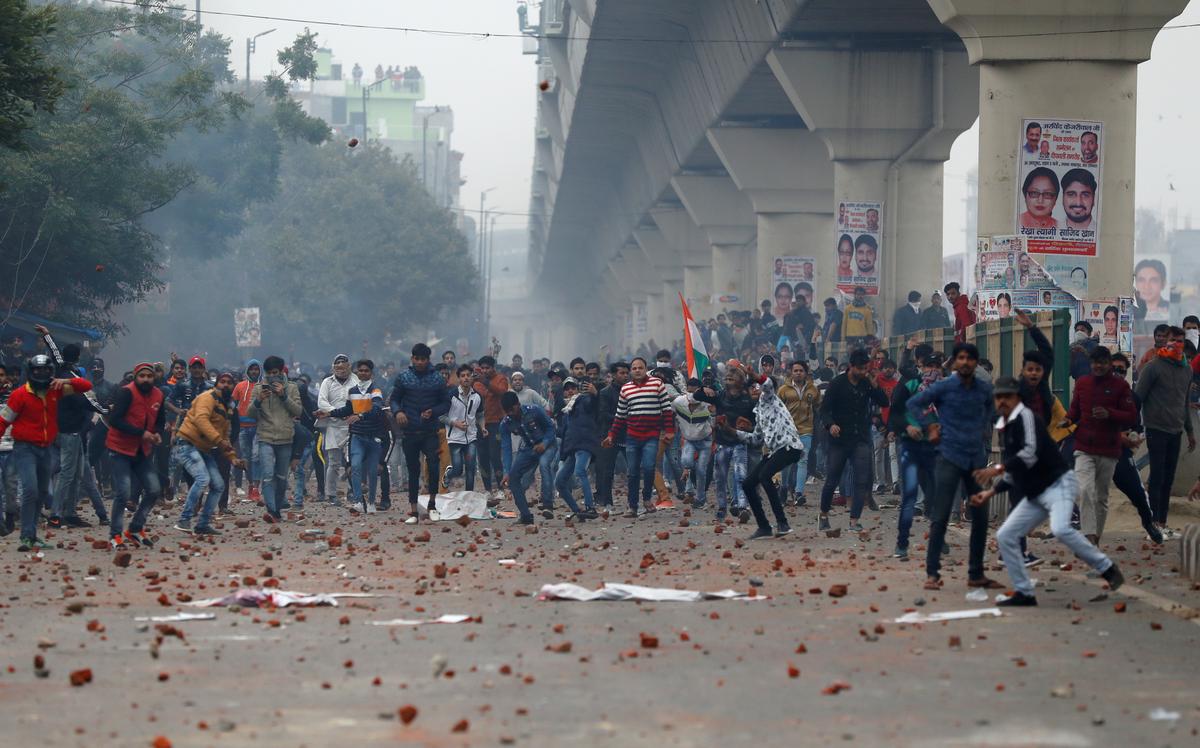 NEW DELHI (Reuters) – Clashes erupted in New Delhi on Tuesday between thousands of protesters and police, the latest violence in a week of opposition to a new law that makes it easier for non-Muslims from neighbouring countries to gain citizenship.

Demonstrators throw pieces of bricks towards riot police during a protest against a new citizenship law in Seelampur, area of Delhi, India December 17, 2019. REUTERS/Danish Siddiqui

Prime Minister Narendra Modi’s government says the new law will save religious minorities such as Hindus and Christians from persecution in neighbouring Bangladesh, Pakistan and Afghanistan by offering them a path to Indian citizenship.

But the law does not apply to Muslims, which critics say weakens India’s secular foundations.

Police fired tear gas in the New Seelampur part of the capital to push back protesters swarming to barricades and throwing stones. At least two police were injured, a Reuters witness said.

“It started as a peaceful protest against the citizenship bill … but got out of hand,” resident Azib Aman said.

Cars were damaged and roads strewn with rocks while small fires on the road sent smoke into the air. Small groups of youth, some with their faces covered, threw stones and bottles.

There have been growing questions about the stance of the government, led by Modi’s Hindu-nationalist party, towards India’s 172 million Muslims, or 14 percent of the population.

The citizenship law follows the revocation of the special status of the Muslim-majority Kashmir region, and a court ruling clearing the way for the construction of a Hindu temple on the site of a mosque razed by Hindu zealots.

Pakistani Prime Minister Imran Khan said India’s actions in Kashmir and on the citizenship law could drive Muslims from India and create a refugee crisis.

“We are worried there not only could be a refugee crisis, we are worried it could lead to a conflict between two nuclear-armed countries,” Khan told a Global Forum on Refugees in Geneva.

Anger with the Indian government was stoked this week by allegations of police brutality at Delhi’s Jamia Millia Islamia university on Sunday, when officers entered the campus and fired tear gas to break up a protest.

At least 100 people were wounded in the crackdown which has drawn criticism from rights groups.

Modi told a rally for a state election on Tuesday that his political rivals were trying to mislead students and others to stir up protests.

“This is guerrilla politics, they should stop doing this.”

The most violent protests occurred initially in the northeastern state of Assam, where mobs torched buildings and train stations, angry the law would help thousands of immigrants from Bangladesh become citizens.

Later, the unrest spread to New Delhi and other major cities, driven by concern that Modi was advancing a Hindu-first agenda and that India’s Muslims were at risk.

The metro train station near the Delhi protest was closed to prevent more people from arriving. Riot police were deployed and were trying to push the crowd off the main road into side streets and alleys.