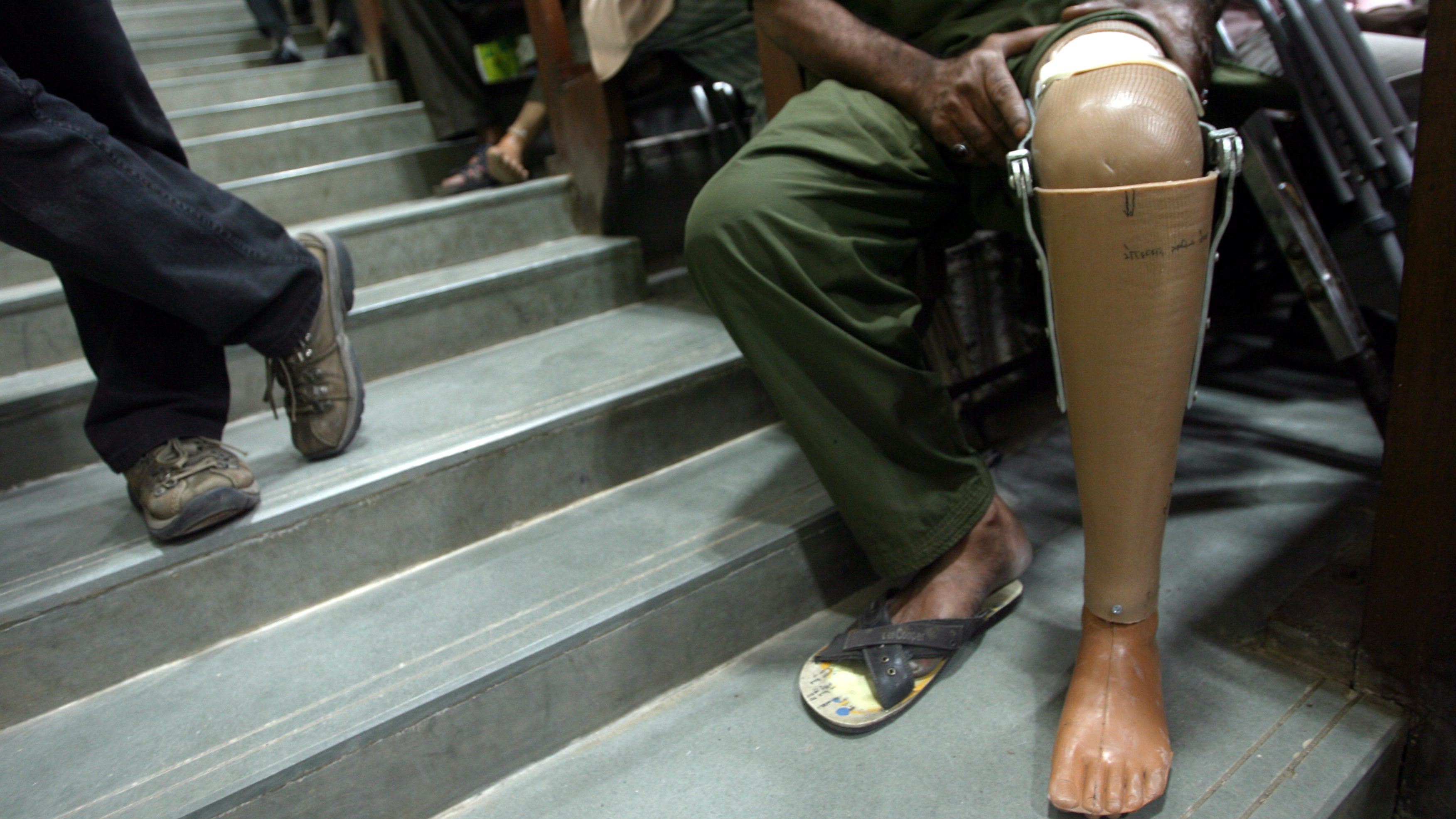 “With amputations being reported on a daily basis, India’s vast rural hinterland is comparable to a warzone,” says Abhit Kumar, who makes practical, affordable prosthetic devices designed to get amputees back into the workforce.

More than two thirds of India’s 1.3 billion inhabitants live in low-income rural areas, where accidents resulting in loss of limbs frequently occur from using unsafe agricultural machinery, working on rail and road construction, or as a result of snakebites.

According to estimates, India has more than half a million amputees, with tens of thousands added to the amputee population every year. And rehabilitation support from the government is negligible thanks to an overwhelmingly large informal sector.

After noticing that artificial limbs or assistive devices available in India were expensive, besides being too heavy or too fragile to be of any practical use, Kumar sensed what he calls a “gaping hole in the prosthetic market” and set about filling it with a startup called Social Hardware.

Kumar, an engineer with a background in the biomedical and robotics field, teamed up with Cameron Norris, who works with open-source hardware in the UK, to study drawbacks in existing prosthetic devices and come up with solutions that could help the average low-income rural Indian for whom imported prosthetics could be worth six months’ wages.

Straight away the team, which began work in 2016, spotted the need for a new approach to upper-limb prosthesis design and came up with the “Avocado,” a wrist connector capable of greatly improving the overall performance of existing artificial prosthetic devices.

Named after the fruit for its shape, the Avocado Wrist Connector is affordable and can be fitted to any upper limb prosthesis costing between Rs11,000 and Rs1.5 lakh ($154 to $2,094) without greatly increasing the overall price of the product.

“The Avocado allowed me to get back to a near-normal existence,” says Subojeet Bhattacharya, a graphic designer based in Bengaluru, who lost both his arms following accidental electrocution almost two decades ago. “The prosthetic devices I tried out never gave me any satisfaction as they did not have a proper grip or the right sensitivity, or else they were heavy,” he says.

“I wanted something that would allow me to help my wife with ordinary activities such as gardening or cutting vegetables and that had to wait till the Avocado wrist connector came along,” says Bhattacharya. “All I need to do is connect the right tools to the Avocado depending on the activity. Once locked in place I have the confidence to carry out heavy tasks such as ploughing or delicate chores in my work as a graphic designer.”

“We set out to create a wrist connector that was easy to fit, comfortable to use but was also durable and affordable for, say, a disabled farmer,” says Kumar. “We turned to AI and came up with the Avocado, a small mechanical adapter and device which could provide an upgrade to the existing user of a prosthesis while conserving battery life for a powered prosthetic hand.”

The Avocado mass manufacturable prototype weighed around 300g but using generative design the team was able to pare down the mass and material until it reached 100g, with no compromise on strength and articulation.

“AI-based software allows you to improvise on design while factoring in stress on particular items. Besides, AI affords design alternatives factoring in human and other inputs so that we could create a manufacturable product with minimum time and expense,” Kumar says.

Once perfected and ready to roll, the Avocado was integrated into the existing prosthetics supply chain in India, which is largely made up of products manufactured by the Artificial Limbs Manufacturing Corporation of India (ALIMCO).

“We have also partnered with rehabilitation centres across the country to make the Avocado available across the country,” says Kumar. “For example, we work with the Nevedac Prosthetic Centre in Chandigarh, joint-capital of the agricultural states of Punjab and Haryana, where many farming accidents occur.”

According to Chandigarh-based Devender Sharma, an agricultural economist and founder of Kisan Ekta (Farmer’s Unity), an umbrella for 65 farmers’ organisations, the Avocado is a “boon for the 1,000-odd farmers that lose a limb each harvesting season to power threshers alone in Punjab and Haryana states.”

Sharma says that power threshers used in the two states are poorly designed with manual feeding systems that “as good as guarantee the loss of human limbs.” He also lays blame on the army of untrained farm labour that descend on the two states during the harvest season to work under inhuman conditions that result in loss of concentration.

“Loss of a limb virtually seals the fate of such workers, even if they get any compensation, and something like the Avocado wrist connector can keep them out of total destitution and suicide or starvation,” says Sharma.

Perhaps more than threshers it is snakebites that most often result in amputations, to prevent the spread of gangrene. “During our surveys we met workers in the coffee estates, plantations and forests of South India who said that snakebite was the most important reason for the loss of limbs,” Kumar says.

“We have partnered with six rehabilitation centres in the north region, northwest region, south region and northeast region and each has its own specific requirement for prosthetics and training on how to use them to the best advantage,” Kumar says.

In collaboration with these centres, amputees are enrolled via non-profit organisations to carry out a full evaluation of injuries and requirements and once the prosthetic is fitted the services of physiotherapists are engaged and a training programme formulated to suit each individual.

“At Social Hardware we provide amputees from rural communities access to the physiotherapy and training required to benefit from a specifically designed prosthetic hand that can be used in their daily lives,” says Kumar.

Each prosthesis is designed using Autodesk Fusion 360 3D CAD software, which makes it easy to prepare a prototype that can be made with 3D printing.

“We collect and analyse data from the recipient patient to ensure the most comfortable and appropriate fitting is achieved. Farmers may look for functionality while someone working in an urban setting may be more interested in an aesthetically made device.”

Importantly for the beneficiaries, Social Hardware products are free to the user because the company follows a corporate non-profit model, a variation of the business-to-business-to-consumer (B2B2C) model, where the non-profit intermediary picks up the cost.

This is a far cry from a situation where anyone needing a prosthetic hand could hope, at best, for a crude “one-size fits all” device that could cause the wearer discomfort or pain and heavy out-of-pocket expenses, says Sharma —“a clear lifesaver in Indian conditions.”

This article was originally published on SciDev.Net. Read the original article. We welcome your comments at ideas.india@qz.com.