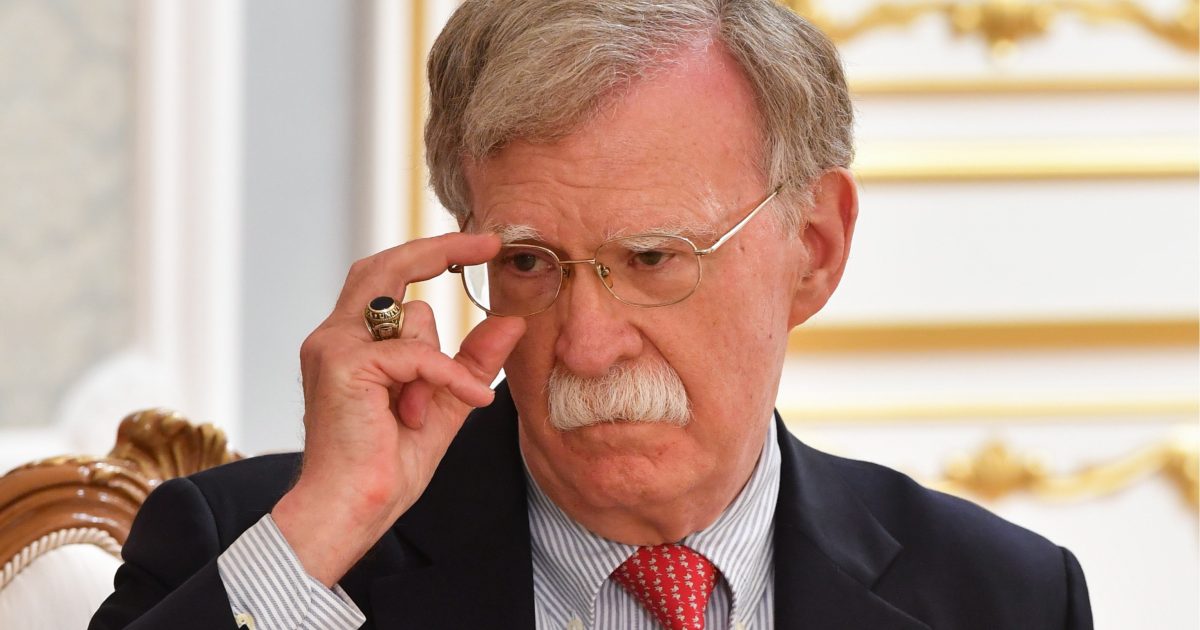 Senate Minority Leader Chuck Schumer (D–N.Y.) wants four current and former administration officials to testify during Donald Trump’s impeachment trial next month. One of them is John Bolton, the former national security adviser, whose name is mentioned 129 times in the House Judiciary Committee’s report charging the president with abusing his powers for personal gain. Bolton, who has publicly stated he has relevant information to share, could shed light on Trump’s motives for withholding military aid to Ukraine and putting off a White House meeting with that country’s president, although it’s not clear he was privy to any incriminating statements by Trump himself.

Bolton declined to testify before the House Intelligence Committee about Trump’s dealings with Ukraine, citing White House opposition. But Bolton, who was never subpoenaed, said he was prepared to testify if a court sided with Congress in its conflict with his former boss. In a letter to the House’s general counsel last month, Bolton’s lawyer said he “was personally involved in many of the events, meetings, and conversations about which you have already received testimony, as well as many relevant meetings and conversations that have not yet been discussed in the testimonies thus far.”

A few weeks later, Bolton complained on Twitter that the White House had “refused to return access to my personal Twitter account” after his resignation in September, possibly “out of fear of what I may say.” It’s not clear that Bolton was referring specifically to Ukraine, as opposed to his broader complaints about an insufficiently hawkish foreign policy. Four days after that, Bolton tweeted that “our country’s commitment to our national security priorities is under attack from within,” a comment that is also open to interpretation, especially since he added that “America is distracted,” which sounds like a knock against the impeachment inquiry.

For his part, Trump claims Bolton’s testimony—which he opposed, ostensibly in defense of presidential prerogatives—would have vindicated him. “John Bolton is a patriot and may know that I held back the money from Ukraine because it is considered a corrupt country, & I wanted to know why nearby European countries weren’t putting up money also,” Trump tweeted on the same day that Bolton worried about “our national security priorities.” But it is doubtful that Bolton’s testimony would be helpful to Trump. Here are some of the points described in the House Judiciary Committee’s report that Bolton would be able to confirm, dispute, or clarify:

• Bolton attended a July 10 meeting that included two senior Ukrainian officials; Secretary of Energy Rick Perry; Kurt Volker, then the U.S. special representative for Ukraine negotiations; Gordon Sondland, the U.S. ambassador to the European Union; Fiona Hill, then a Russia specialist on the National Security Council (NSC); and Alexander Vindman, the NSC’s director for European affairs. Hill and Vindman testified that Sondland brought up investigations of purported Ukrainian interference in the 2016 presidential election and former Vice President Joe Biden’s alleged efforts to protect his son Hunter from a probe of Burisma, an energy company that employed the younger Biden as a board member. Those are the investigations that Trump would ask Ukrainian President Volodymyr Zelenskiy to conduct during their much-scrutinized July 25 phone call.

• After Bolton left that meeting, Hill testified, Sondland told the remaining participants he and acting White House Chief of Staff Mick Mulvaney had agreed that a White House meeting between Trump and Zelenskiy would happen only after the Ukrainian government publicly committed to those investigations. When Hill reported that conversation to Bolton, she testified, he instructed her to tell the NSC’s legal adviser that “I am not part of whatever drug deal Sondland and Mulvaney are cooking up on this.”

• William Taylor, the U.S. ambassador to Ukraine, testified that Bolton opposed Trump’s July 25 call with Zelenskiy, worrying that “it was going to be a disaster” because “there could be some talk of investigations or worse.”

• For months, Rudy Giuliani, Trump’s personal lawyer, had been lobbying the Ukrainian government to investigate Burisma and the Bidens in the hope of uncovering “information [that] will be very, very helpful to my client,” presumably because Joe Biden is a leading contender to oppose Trump in next year’s presidential election. Bolton reportedly resented Giuliani’s involvement in negotiations with Ukraine. According to Hill, Bolton said “nobody should be meeting with Giuliani” and repeatedly described him as a “hand grenade that was going to blow everyone up.”

• Bolton was reportedly dismayed by Trump’s decision to delay $391 million in congressionally approved military aid to Ukraine. “Sometime prior to August 16,” Bolton met with Trump to discuss the hold on military aid. Tim Morrison, then the NSC’s top Russia official, testified that Trump told Bolton he was not yet prepared to deliver the money. The reason Trump gave, if any, is obviously relevant to the allegation that he abused his power in an effort to discredit a political rival.

• Taylor testified that Bolton urged him to send an August 29 cable to Secretary of State Mike Pompeo in which he complained about the “folly” of “withholding military aid to Ukraine at a time when hostilities were still active in the east and when Russia was watching closely to gauge the level of American support for the Ukrainian government.” Taylor said he “could not and would not defend such a policy.”

• Morrison testified that he twice discussed with Bolton what he understood to be a quid pro quo between the military support and the investigations Trump wanted. One of those conversations followed a September 1 meeting at which Sondland (according to his own testimony) told a senior Zelenskiy adviser “the resumption of U.S. aid would likely not occur until Ukraine took some kind of action on the public statement [about the investigations] that we had been discussing for many weeks.” Morrison said he reported that exchange to Bolton, who told him to “make sure the [NSC’s] lawyers are tracking” the situation.

• Bolton resigned as national security adviser on September 10. It’s not clear what role, if any, Trump’s Ukraine policy played in his resignation.

Bolton’s opposition to the hold on military aid shows he did not agree it was justified by legitimate concerns about official corruption in Ukraine, as Trump maintains. That does not necessarily mean Bolton has direct evidence of a quid pro quo, although his reference to “many relevant meetings and conversations that have not yet been discussed” is certainly intriguing.

Similarly, Bolton’s frustration with Giuliani’s involvement could have stemmed from policy disagreements and resentment that Giuliani was undercutting the NSC’s role, as opposed to a belief that the president was perverting foreign policy to serve domestic political interests. A misguided or haphazard foreign policy is not the same as a corrupt foreign policy. But if the testimony by Hill, Morrison, and Taylor is accurate, Bolton believed that the “favor” Trump wanted from Zelenskiy was inappropriate and that tying it to the military aid was potentially illegal.

If I were Trump, I would not want to hear what Bolton has to say. And since Senate Majority Leader Mitch McConnell (R–Ky.) has said he plans to conduct Trump’s trial however Trump wants, we probably won’t.