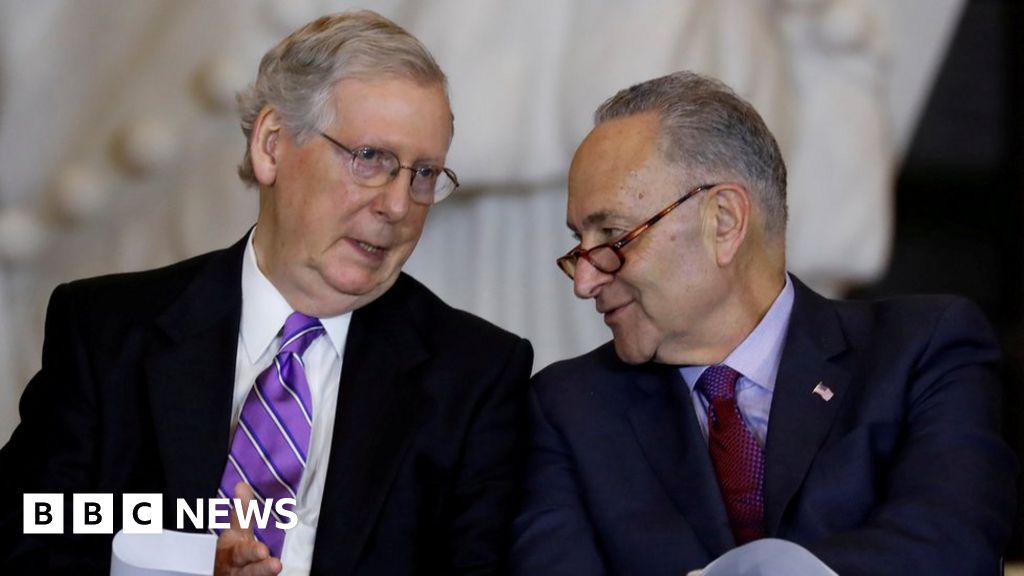 The US Senate’s top Democrat has called for current and former White House aides to testify at President Donald Trump’s expected impeachment trial.

But the Republicans, who control the Senate, have called for a short trial without witnesses.

A vote in the House to impeach Mr Trump is expected on Wednesday.

If a majority votes for impeachment, the case will then move to a trial in the Republican-controlled Senate.

The president is accused of soliciting a foreign country to help him politically, by trying to pressure Ukraine to launch a corruption investigation into his Democratic rival Joe Biden.

Mr Trump is also accused of obstructing Congress. The White House refused to allow staff to testify during hearings in the House of Representatives in recent weeks.

The Republican president denies wrongdoing. He has called the Democratic-led inquiry a “witch hunt” and predicted it will even benefit him in next year’s presidential election.

Mr Trump lashed out on Sunday at the Democratic leader of the US House of Representatives, Speaker Nancy Pelosi, tweeting that “Nancy’s teeth were falling out of her mouth, and she didn’t have time to think!”

What did Schumer say?

Mr Schumer, a New York senator, made the appeal for witnesses in a letter to Senate Majority Leader Mitch McConnell on Sunday.

In addition to Mr Mulvaney and Mr Bolton – a former National Security Adviser – he also called for Robert Blair, a top aide to Mr Mulvaney, and budget official Michael Duffey to give testimony at the expected Senate trial.

“All four of these witnesses were asked to testify in the House impeachment inquiry but did not appear,” the letter says.

Mr Schumer said the trial must be one “that not only hears all the evidence and adjudicates the case fairly; it must also pass the fairness test with the American people”.

He referred to the “bipartisan spirit” of the 1999 impeachment trial of then-President Bill Clinton in which witnesses were called.

“It is clear that the Senate should hear testimony of witnesses at this trial as well,” he wrote, as he called for subpoenas to be issued for the four men.

Mr Schumer said he also wanted the Senate to issue subpoenas for a set of documents that Democrats believe “will shed additional light” on Mr Trump’s dealings with Ukraine.

He also laid out a timetable for the expected Senate trial, suggesting that pre-trial proceedings take place on 6 January and that senators and US Supreme Court Chief Justice John Roberts, who will preside over the case, be sworn in the next day. In total, he suggested as many as 126 hours of proceedings.

Are the witnesses likely to be summoned?

Mr Trump’s party controls the chamber with a 53-47 majority, though most motions in the proceedings require 51 votes to pass.

As majority leader, Mr McConnell may find his room for manoeuvre diminishing if moderate Republicans face pressure from Democrats to show some flexibility on the process.

Asked on Friday whether he wanted a long or short trial, Mr Trump said it “doesn’t matter”.

“I’ll do whatever I want. We did nothing wrong. So I’ll do long, or short,” he told reporters.

However, he has also indicated that he would like to see witnesses called such as Joe Biden and his son.

The White House has not yet publicly commented on Mr Schumer’s letter. A spokesman for Mr McConnell told Reuters news agency that he would meet Mr Schumer soon “to discuss the contours of a trial”.

Mr McConnell, a Kentucky senator, has the final say over the format of the proceedings.

A Senate vote requires a two-thirds majority to convict the president – and, given that Republicans hold sway in that chamber, Mr Trump is widely expected to be acquitted.

President Trump is accused of pressuring Ukraine to dig up damaging information on one of his main Democratic challengers for the presidency in 2020, Joe Biden, and his son Hunter.

Hunter Biden worked for a Ukrainian company when his father was US vice-president.

Mr Trump is accused of dangling $400m of military aid to Kyiv and the prospect of a White House meeting for Ukraine’s president as bargaining chips.

This, Democrats say, amounts to an abuse of presidential power, using the office for personal political gain and to the detriment of national security. Ukraine was using that money in its ongoing conflict with Russia.

Mr Trump is also accused of obstructing Congress by refusing to co-operate with the congressional inquiry.

Mr Trump denies using US military aid – which was eventually released – as a bargaining chip. He says it was appropriate to ask Ukraine to investigate “corruption”, referring to the energy firm where Hunter Biden worked.