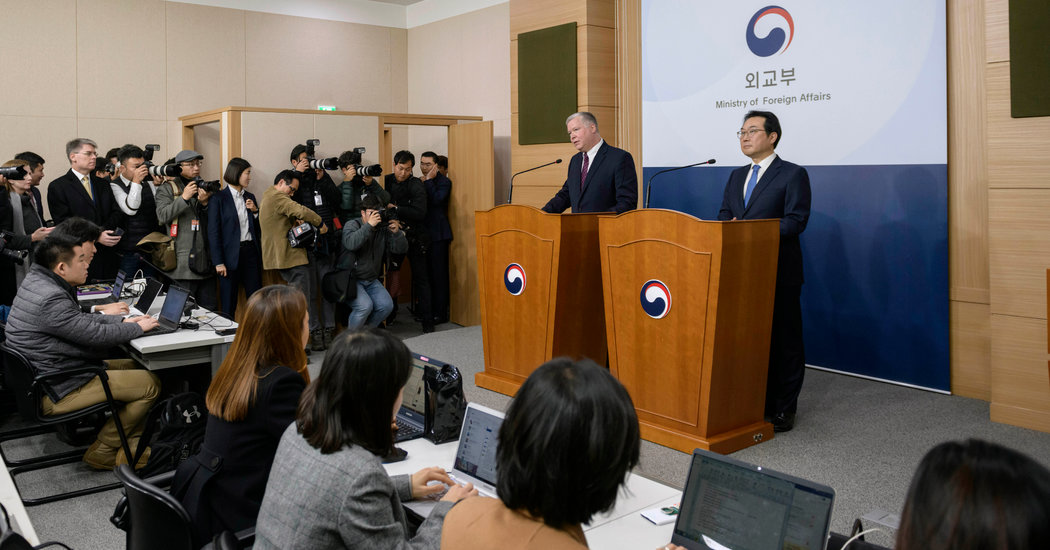 SEOUL, South Korea — The top United States envoy on North Korea warned on Monday that if Pyongyang conducted a major weapons test in the coming days as feared, it would be “most unhelpful,” as Washington made last-minute efforts to steer the North away from resuming long-range missile and nuclear tests.

“We are fully aware of the strong potential for North Korea to conduct a major provocation in the days ahead,” Stephen E. Biegun, Washington’s top representative on North Korea, said during a news conference in Seoul. “Such an action will be most unhelpful in achieving a lasting peace on the Korean Peninsula.”

Mr. Biegun, who was recently also appointed the State Department’s No. 2 official, met with senior South Korean officials in Seoul on Monday amid signs that North Korea was preparing to launch a satellite or flight-test an intercontinental ballistic missile.

In the last 10 days, the country has conducted two tests that it called “very important” or “crucial” to improve what it called its “strategic nuclear deterrent.”

Officials and analysts in the region say those tests — at its missile engine and satellite-launch sites near the border with China — most likely involved a new booster engine and other technologies used to launch an intercontinental ballistic missile. That is raising fears that the North is moving rapidly toward reactivating its long-range nuclear missile program, whose advancement led to a crisis with Washington two years ago.

North Korea has resumed its weapons activities while warning that it would abandon diplomacy and might restart nuclear and long-range missile tests if Washington doesn’t make more concessions, such as lifting sanctions, by Dec. 31.

On Monday, Mr. Biegun dismissed that deadline, while stressing that the United States was ready for serious negotiations to produce a denuclearization deal that could satisfy both Washington and Pyongyang.

“Let me be absolutely clear: The United States does not have a deadline,” he said.

But he also appealed to his counterparts in Pyongyang.

“It is time for us to do our jobs,” he said of efforts to reach a deal on denuclearization. “Let’s get this done. We are here, and you know how to reach us.”

There has been speculation that Mr. Biegun was hoping to meet with North Korean officials on the inter-Korean border this week. And his appeal on Monday was seen as an open invitation to such a meeting, but there was no immediate response from North Korea.

When Kim Jong-un met President Trump in Singapore in June 2018, the North Korean leader promised to “work toward complete denuclearization of the Korean Peninsula” in return for “new” relations and security guarantees from Washington. But their two subsequent meetings, as well as lower-level talks between the two sides, have failed to make progress on carrying out the Singapore deal.

During their meeting in Hanoi in February, Mr. Trump rejected Mr. Kim’s demand that all major United Nations sanctions be lifted in return for the dismantlement of one of the North’s key nuclear fuel production facilities, but not its nuclear warheads.

North Korea has since sounded increasingly impatient, accusing Washington of trying to stall negotiations as Mr. Trump remains preoccupied with a congressional attempt to impeach him and even reviving an old insult against the American leader, calling him a “dotard.” Mr. Trump tweeted last week that the North should not “interfere” in November’s election.

Mr. Kim is widely expected to use a meeting of his Workers’ Party’s Central Committee, scheduled for this month, and his annual New Year’s Day speech to reveal his new policy options.

On Monday, Mr. Biegun lamented that the recent North Korean statements had been “so hostile and negative and so unnecessary,” and said they reflected “neither the spirit nor the content of the discussions” both sides had recently held. In these meetings, Mr. Biegun said, his team has offered “any number of creative ways to proceed with feasible steps and flexibility.”

But that failed to satisfy North Korea.

The country has resumed testing mostly short-range ballistic missiles and rockets since May, though Mr. Trump has largely dismissed such tests as involving weapons that do not directly threaten the United States.

But if North Korea returns to launching satellites or testing ICBMs, it would unambiguously contradict Mr. Trump’s assertion that he has largely resolved the North’s nuclear threat and could rekindle a crisis in the midst of the president’s re-election campaign.