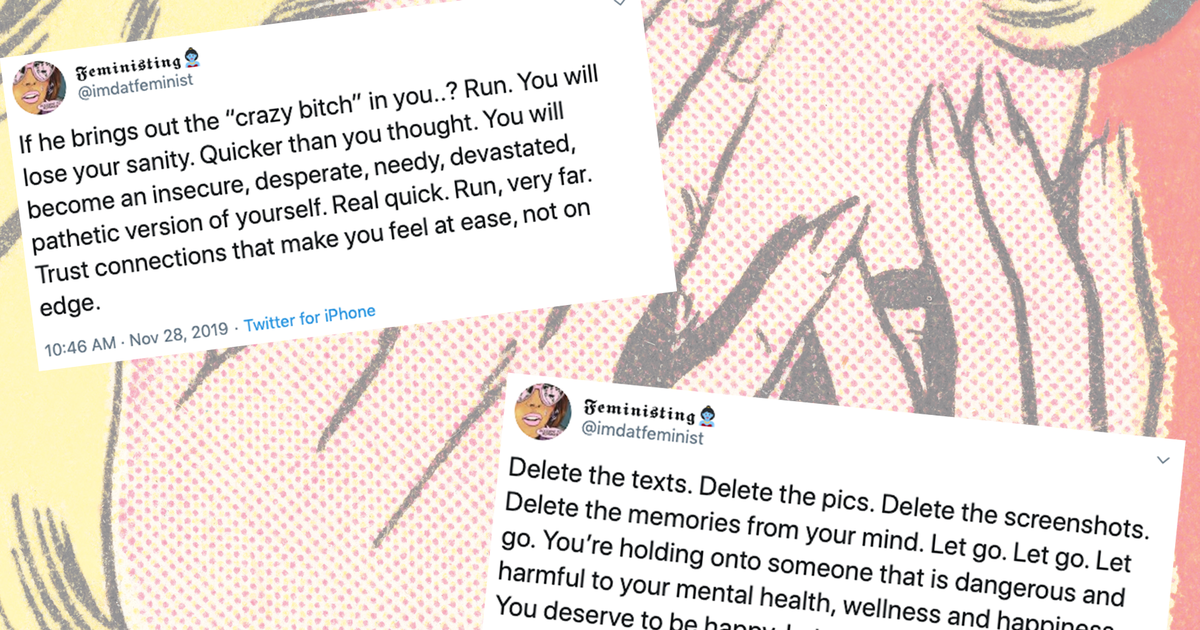 “Let me tell u ladies about the beautiful feeling that is looking at someone u used to fantasize about, dream about, NEED, cry over, die for…and realize that he is ugly.

Look at his face. Look at it. It’s not…good. He’s ugly and u can laugh about it now.”

This is a from , a Twitter account dedicated to help women get out of — or not fall into — toxic relationships. Instead it urges women to focus on themselves and their mental health. “Let me tell u ladies” is also the account owner’s personal favorite tweet thus far.

Let me tell u ladies about the beautiful feeling that is looking at someone u used to fantasize about, dream about, NEED, cry over, die for…and realize that he is ugly.

He is ugly, sis.
Look at his face. Look at it. It’s not…good. He’s ugly and u can laugh about it now.

The account is the brainchild of a university student who said she prefers to remain anonymous. She started imdatfeminist in May 2019 but has already had a big impact. She has over 21,000 followers on Twitter and also to shout her empowering soundbites there.

I found imdatfeminist at the perfect time myself. I would say I was “going through it,” by which I mean I was having a hard time getting over someone. This relationship was definitely mostly in my head, and now the person was living there rent-free, putting their bare feet on my brand new coffee table and drinking all my favorite ciders.

I’ve talked about this person with my friends, in my journal, to my therapist — and while I knew logically that this person sucked, I kept thinking about them.

In the throes of this, I spotted an imdatfeminist tweet on my feed and was struck right away. This wasn’t like other viral tweets that sing that same hymn of “Dump him!” and “You’re better than him!” There’s nothing wrong with those statements, but after awhile they begin to ring hollow.

If you’re wanting to hurt them and make them jealous and pretend that you’re fine and front about how you really feel so they see that and miss you and hit you up..?

Wtf are you doing? Seriously. It’s over. Close the chapter. FUCK THEM. They don’t deserve to have your attention.

The tweet felt like a punch in the gut. I saw that it was part of a thread, and read the whole thing. Then, I went to her profile and saw dozens upon dozens of tweets preaching the same thing.

It’s creator started the account for people in my exact situation. “I started imdatfeminist because I’m sick and tired of beautiful, incredible, smart, capable, brilliant women accepting mediocrity of their love lives,” she told me. She said she went through a toxic relationship herself, and did not want women in her life or others to repeat that pattern.

She herself was inspired when she saw a post on Instagram — though she did not know the source — that said, “He’s treating you like shit because he doesn’t care about you.” It stung, but she said it shook some sense into her. “I was like, ‘Oh my god, I’m crying over someone who doesn’t even know the difference between your and you’re.’”

While the account was born out of her frustration over men, she also started tweeting to keep herself accountable. “Tweeting ‘he is disappointing and useless and doesn’t value you’ was keeping me in check.”

There is a certain repetition to imdatfeminist’s tweets — coupled by the fact that she often RTs past tweets — and it proves her desire for her message to penetration her followers’ consciousness: They are worthy, they do not have to settle. It’s a sister’s tough love condensed into 240 characters.

If he brings out the “crazy bitch” in you..? Run. You will lose your sanity. Quicker than you thought. You will become an insecure, desperate, needy, devastated, pathetic version of yourself. Real quick. Run, very far. Trust connections that make you feel at ease, not on edge.

She said she gets hundreds of DMs and feels a sense of solidarity with a large number of her followers. While many of these DMs are from women supporting her, she’s quick to point out that some people reaching out are pissed off men.

“I have the ers in my DMs,” she said. This includes men calling her an “angry feminist,” cursing at her, and comparing her to literal genocider Joseph Stalin.

Despite what haters may believe, imdatfeminist’s account does not exist to tell men to change their behavior. Rather, she’s telling women to look at their behavior. “What I’m doing is telling women to look inward and to analyze their relationships and understand that it’s their responsibility to raise standards for themselves and for the men that they’re allowing it to their beds and their hearts and their lives,” she said.

What hurts imdatfeminist the most is not hateful messages from men, but those from women who she says are misunderstanding her tweets. At the same time, there are few — “very few,” she emphasized — men who do support her, and she said those men give her hope.

Additionally, queer men also reach out to her. “I also have queer men in my DMs saying that all men are the same,” she said.

She continued, “I try not to be heteronormative on my account. I speak about men and how abusive that they can be and how toxic they can be because that’s what I know.” She said she doesn’t want anyone to feel excluded and that everyone deserves healthy relationships.

While imdatfeminist’s following on Twitter is steadily growing, she has bigger plans than just maintaining the account. For one, she’s planning on branching out into YouTube to “put a face to the message.”

Beyond that, she wants to bring her preachings of healthy relationships and prioritizing oneself to middle and high school students. “My goal to launch program for young women to teach them about toxic relationships,” she said. “I feel like this could save lives.” She herself had a similar class in high school, and she wants to bring those teachings to a wider audience.

At the current moment, though, you’ll find her tweeting. She sees why women may put men on pedestals — out of fear, low self-esteem, lack of self-love — and her ultimate goal is to change that. She wants her audience to know “that extraordinary type of love that you want is out there. And they’re waiting for you,” she said.

While tweets cannot replace help like talk therapy, imdatfeminist is providing a certain service that thousands of people — including myself — are grateful for. Armed with her tweets, you may be giving that person living rent-free in your head an eviction notice.