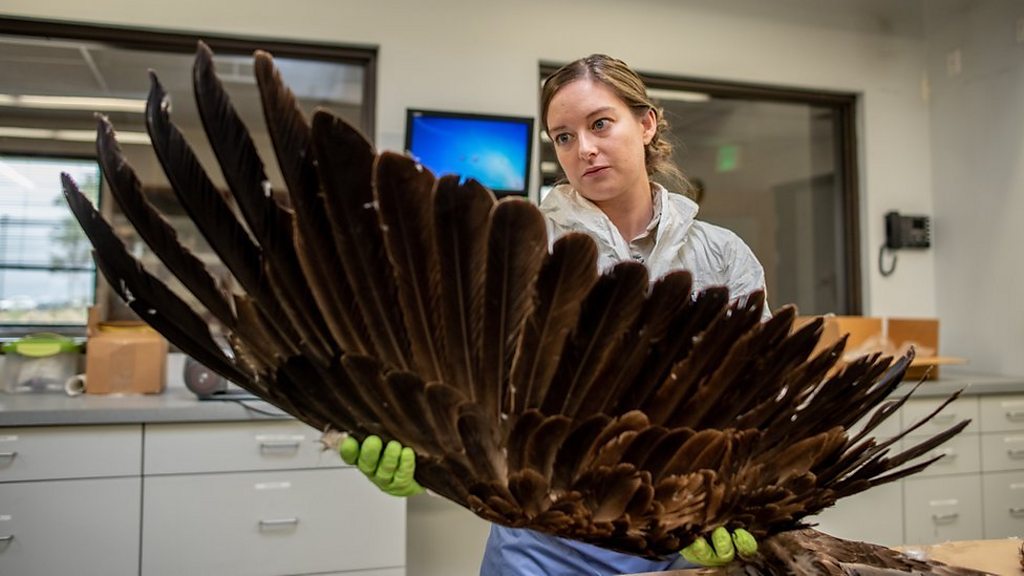 The eagle is America’s national bird but when these revered creatures die, who takes care to ensure they end up in the right hands?

Warning: This story contains images of dead and dissected eagles

Few symbols are as potent as the American eagle.

This magnificent bird of prey is the country’s national bird, and a powerful emblem of freedom found on everything from military flags to the dollar bill.

As such, it’s illegal for anyone in the US to possess or disturb Golden Eagles or Bald Eagles – dead or alive – unless there is a special exemption in place.

Under the Bald and Golden Eagle Protection Act of 1940, it is against the law to even pick up a discarded feather.

But for many Native Americans and Alaska natives, the eagle is a sacred creature and there is a strong cultural tradition requiring bird parts for ceremonies and rituals.

That’s where the National Eagle Repository in Colorado comes in.

Every day around 30 to 40 eagle carcasses arrive at the centre, which is run by the US Fish and Wildlife Service, to be checked over and prepared for the next stage in their journey.

The four-member team takes in birds from all US states except Hawaii, and helps distribute them to the country’s 573 federally recognised tribes.

Liza Roman has worked at the repository for six years. Her role is to process all of the applications that come in and ensure that relations with the tribal members run smoothly.

Applicants have to show proof they are a member of a federally recognised tribe and that they are over 18-years-old, otherwise they are not eligible.

“The national eagle programme was established specifically for Native American religious use and ceremonial purposes,”

“They can also ask for a whole bird or individual feathers and have to specify from what sort of bird they need and the age of the bird.”

Roman says some eagles are harder to come by than others.

“Our repository runs off of supply and demand,” she says.

“The highest demand right now is for our immature golden eagle with the wait time for that running at seven and a half years. The quicker the tribes put an application in, the faster they get on that waitlist. It’s first come, first served.”

Bald eagles, however, have just about a two month turnaround.

For Native Americans, the eagle is a creature to be revered.

Hanley Frost Sr is the cultural co-ordinator for the Southern Ute Indian Tribe in Colorado. He is one of many tribal leaders responsible for ceremonies.

Mr Frost Sr, who is a Mouache Caputa tribal member, explains that the feathers are sacred and have spiritual significance.

“The eagles are a symbol of great spiritual healing power. The eagle carries our prayers as it’s the only animal that can go much further into the sky – towards the heavens and so carry these prayers with it. Its eyes can see a great distance, while the wings and the feathers are able to carry this creature in any direction it wants to go.”

He said that fans made from the feathers are used for healing and blessing purposes while eagle bones can be shaped into whistles for sun dance ceremonies and other rituals.

“This bird was able to travel great distance and great height and see the things we can’t. The feathers in my possession represent one of the greatest honours anyone can ever receive as a native,” he adds.

Back at the repository in Commerce City, Colorado all of the staff say that they love their jobs because it helps them protect America’s national bird and understand more about the cultural significance of the bird for indigenous people.

“I love the exposure to the culture – the Native Americans and Alaska Natives all have different traditional ceremonies – all with a purpose,” Ms Roman says.

“Working with them and the eagles gives you a different perspective for the species as a whole.”

The repository was first created in the 1970s to recognise the significance of eagle feathers to Native Americans and Alaska Natives.

Its current form emerged in 1994, after then-President Bill Clinton signed a memorandum requiring dead eagles to be sent to the repository.

The repository moved from Oregon to Colorado in 1995, where it has been ever since.

While the US has seen a decline in bird numbers over the past half a century, the Bald Eagle, with its white head and white tail feathers, is viewed as a conservation success story. In 2007 it was removed from the US Endangered Species Act.

Golden Eagles however, which nest on cliffs or high trees, remain protected under several acts.

Scientist Laura Mallory says that every time she picks up one of the birds, she has three things in mind – how the creature died; is the person receiving the bird actually going to be able to use it; and thirdly, what condition is it in?

She asks questions such as: “Is it covered in larvae from insects; it is covered in seaweed; does it have any nutritional deficiencies that have caused it to have any deformities?”

The staff have had to adapt their techniques of evaluating the birds over the years. More recently they have started experimenting with a flesh eating beetle colony which is a more natural way of treating the feathers.

When Mallory began at the repository just over a year ago, it would take her up to 15 minutes to check each bird – now it just takes five minutes.

Her job has also meant she’s had to become an expert at feather identification.

“I have to be able to weed out any random bird feathers that come in – even if they look like eagle feathers. A lot of people mistake turkey or vulture feathers for an eagle’s but when you flip it over, it’s the sheen that makes it a different type of feather.”

With demand so high and supply limited, there have been several programmes put into place to try to help the situation and also hinder the black market that exists for eagle parts.

“There are those who will sell parts for money but we try to make sure we know the people who have the parts and keep documentary records,” Mr Frost Sr says.

“So if someone shows up with an eagle feather but is a non-native, we know where they got it from.”

Over the last decade certain Native American tribes have been given permits allowing them to keep live eagles and use feathers that have been naturally discarded. These include rescue birds, whom because of sickness or injury are unable to be rehabilitated and returned to the wild.

And in August this year, the US and Fish and Wildlife Service loosened some of its restrictions around bald and eagle remains following consultation with recognised tribes.

Now those tribes with a special permit are able to keep feathers and parts found on certain lands. There are still many caveats in play but the government described this as a “monumental decision”.

Although the repository currently only caters for requests from federally recognised tribes, there is heated debated around access rights.

The US Fish and Wildlife Service is currently examining the responses to a formal petition submitted by Robert Soto, pastor of McAllen Grace Brethren Church in Texas and The Becket Fund for Religious Liberty. The petition seeks access to feathers for non-federally recognised tribes and those – Native American or not – who are “sincere religious believers”.

There is opposition from many tribes who say it’s already difficult to get hold of feathers.

Back in her lab surrounded by talons, feathers, whole birds and more, Laura Mallory carefully holds a feather up high.

She says: “It just really changes your perspectives when looking at these eagles – they may come in dead but they have this magnificence around them in terms of knowing that when they leave here – just what they are going on to do.”