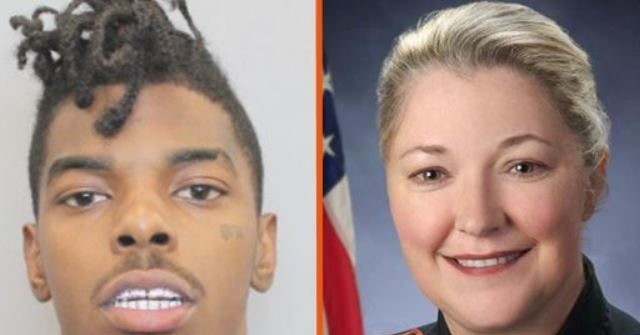 HOUSTON, Texas — Law enforcement officials and police union leaders across the Lone Star State joined forces to express outrage over a Harris County magistrate judge’s decision to set a bond of $150,000 for a man accused of killing a Nassau Bay police officer. A district court judge in Houston later revoked the bond.

“Outrageous,” Houston Police Chief Art Acevedo tweeted after a Harris County magistrate judge set a bond of $150,000 for Tavores Henderson, the man accused of killing Nassau Bay Police Sergeant Kaila Sullivan on December 10. “This coward who took the life of a hero & poses a clear & present danger to community & the people we serve.”

Outrageous! This coward who took the life of a hero & poses a clear & present danger to community & the people we serve. This story is incomplete, what court is this? Bail decisions need to be made on the basis of risk to public@ safety & of flight.

Nassau Bay Police Sergeant Kaila Sullivan died on the evening of December 10 after being struck by a car fleeing from a traffic stop. The 15-year police veteran arrived on the scene to assist other officers who stopped a man with warrants from Harris County on charges of domestic violence, Fox 26 Houston reported. At some point, the suspect, Tavores Dewayne Henderson, allegedly broke away from the officers and jumped back in to his car in order to flee. As he drove away, he allegedly ran over the sergeant killing her in the process. He then allegedly continued to drive away.

Police arrested Henderson a few days later after finding him hiding in a home on Heritage Trail, the local Fox affiliate reported.

The suspected cop-killer appeared in court on Thursday before Magistrate Judge Colin Amann. The judge set bond for the man accused of murder at only $150,000  the Houston Chronicle reported.

“Mr. Henderson, in the murder case I’m setting your bond at $150,000. That’s taking into account that you have a felony bond pending that you forfeited which means you didn’t show up for court. Which is now set at zero and you have a new misdemeanor charge for assaulting a family member … out of Galveston County for attempted theft where the judge has set that bond at $20,000,” Judge Amann told the defendant, according to a report by KHOU CBS 11 in Houston.

“I was appalled, as probably most everyone else was, when I learned the defendant was issued a $150,000 bond,” Nassau Bay Police Chief Tim Cromie told he local CBS affiliate.

As outrage spread through the law enforcement community, the Harris County District Attorney’s office upgraded the charge to capital murder of a police officer and District Court Judge AmyMartin revoked the bond, the local newspaper stated. Officials scrambled to assure the public that Henderson could have not been released on the bond due to other no-bond warrants already in the system.

“There was never going to be an issue where this individual was going to get out on a bond after we captured him,” Assistant District Attorney Sean Teare told KHOU.

However, police officials expressed their concerns that the low bond setting sends a bad message about public safety.

“Smh in disbelief,” Harris County Sheriff Ed Gonzalez tweeted. “A Police Sgt dead, suspect on the run for couple days, my team and our law enforcement partners do a phenomenal job locating & taking him into custody without incident- I simply do not understand his initial bond set at $150,000.”

Smh in disbelief. A Police Sgt dead, suspect on the run for couple days, my team and our law enforcement partners do a phenomenal job locating & taking him into custody without incident- I simply do not understand his initial bond set at $150,000. #HouNews

Law enforcement unions also expressed their concerns over the message set by the low bond setting.

“For the judge to allow any sort of bond, especially one this low, is imbecilic. He is an accused cop killer already out on multiple bonds, who went on the run after he murdered Sgt. Sullivan.  The decision to even consider giving him a bond is beyond illogical and idiotic,” Joe Gamaldi, President of the Houston Police Officers Union and Vice-President of National Fraternal Order of Police, said in a statement provided to Breitbart Texas.

Harris County Deputies Organization President David Cuevas added, “The criminal justice system only works when all people, including members of the criminal justice system itself, have faith in its processes and those in charge of making decisions. These series of decisions strike deep at the heart of our shared faith in our prosecution and judicial arms of that system. Texans, especially those in law enforcement, deserve better.”

Texas Municipal Police Association Executive Director Kevin Lawrence called Judge Amann’s bond setting “unconscionable,” adding, “it is not only an affront to Sgt. Sullivan’s family, it is a slap in the face to every law enforcement officer who is out there today trying to keep our communities safe. The good, decent, law-abiding citizens of Harris County need to be alarmed. If this pattern is not reversed, Houston is going to become Baltimore or Chicago or Washington D.C.”

Henderson continues to be held in the Harris County Jail on a charge of capital murder.

So far this year, 118 law enforcement officers lost their lives in the line of duty, according to the Officer Down Memorial Page.

Bob Price serves as associate editor and senior political news contributor for the Breitbart Border team. He is an original member of the Breitbart Texas team. Follow him on Twitter @BobPriceBBTX and Facebook.