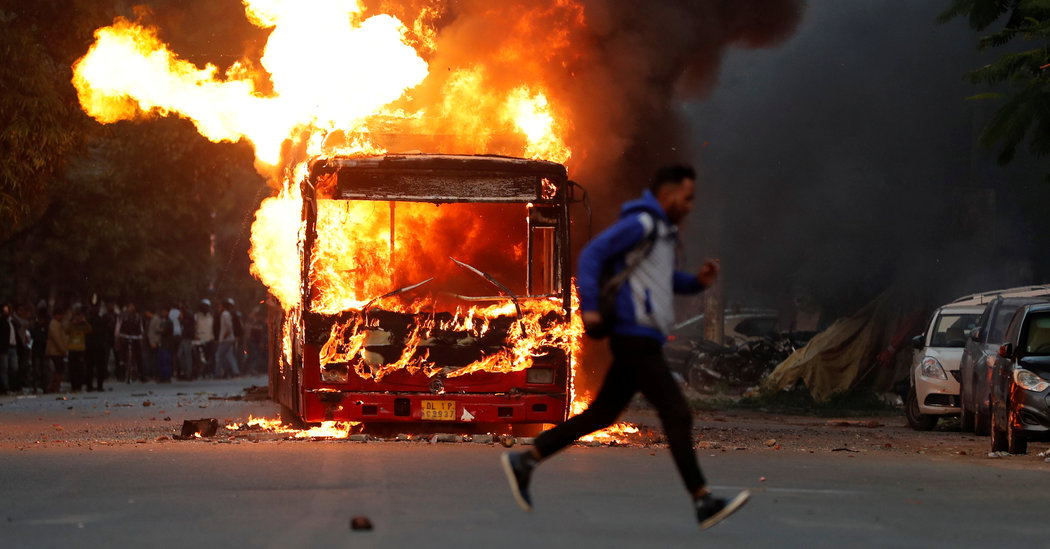 NEW DELHI — The Indian police cracked down heavily on protesting students Sunday night, blasting tear gas into a library and beating up dozens of young people as violent demonstrations against a contentious citizenship bill spread across the country.

Last week, the Indian Parliament passed a measure that would give special treatment to Hindu and other non-Muslim migrants in India, which many critics said was blatantly discriminatory and a blow to India’s founding as a secular democracy.

The legislation is a core piece of a Hindu-centric agenda pursued by Prime Minister Narendra Modi and his Bharatiya Janata Party, and many analysts predicted trouble. India’s large Muslim minority, around 200 million people, has become increasingly desperate and angry, certain that many of Mr. Modi’s recent initiatives are intended to marginalize them.

Protests immediately broke out in northeastern India, where several demonstrators were killed, and spread to Bhopal, Jaipur, Ladakh and Kolkata. Cars, buses and railway stations have been set on fire in an explosion of anti-government feeling.

On Sunday, when students at Jamia Millia Islamia University, a primarily Muslim university in New Delhi, organized a large demonstration, which many witnesses said started out peacefully, the police responded with force.

Videos widely circulated on social media show officers beating students with wooden sticks, smashing some on their heads even after they had been knocked down. In one video, a group of female students tries to rescue a young man from the grasp of the police. A squad of officers in riot gear tears him away and knocks him down with heavy blows. Even after the women form a protective circle around the downed student, officers can be seen trying to jab the young man with their wooden poles.

Dozen of students were hospitalized, some with broken bones, according to news media reports. Some witnesses said that gangs of older men appeared on campus to battle students, possibly an echo of past episodes of organized Hindu-Muslim clashes. Some students raced to seek shelter in a library where they were tear-gassed by the police.

Lokesh Devraj, a product designer who lives near the university, said he exited a metro station on Sunday afternoon and saw a stampede of terrified university students running toward him as the police charged, sticks in hand, beating at whatever crush of people they could find. The students did not resist, Mr. Devraj said, and had no sticks or stones in their hands.

A police officer ran at Mr. Devraj and his 65-year-old father, he said, waving a baton in his clenched fist. Mr. Devraj shielded his father from the blows and was beaten himself, he said. The police officer backed off only after Mr. Devraj explained that he was simply a resident trying to return home.

India, at around 80 percent Hindu and 14 percent Muslim, has a history of explosions of religious violence. With this citizenship measure, the Modi government has been pushing legislation guaranteed to create anger and despair in India’s minority Muslim community.

It comes against a steady drumbeat of anti-Muslim moves by Mr. Modi’s government and its allies across India’s states including: changing historic place names from Muslim names to Hindu ones; editing government-issued textbooks to remove mentions of historic Muslim rulers; and stripping away statehood from what was India’s only Muslim-majority state, Jammu and Kashmir, and indefinitely incarcerating hundreds of Kashmiris.

The new citizenship legislation, called the Citizenship Amendment Bill, expedites Indian citizenship for migrants from some of India’s neighboring countries if they are Hindu, Christian, Buddhist, Sikh, Parsee or Jain. Only one major religion in South Asia was conspicuously left off: Islam.

The legislation, which passed through both houses of Parliament and now awaits the president’s signature, which is expected, follows hand in hand with a divisive citizenship test conducted this summer in one state in northern India and possibly soon to be expanded nationwide.

All residents of the state of Assam, along the Bangladesh border, had to produce documentary proof that they or their ancestors had lived in India since 1971. Around two million of Assam’s population of 33 million — a mix of Hindus and Muslims — failed to pass the test, and these people now risk being rendered stateless. Huge new prisons are being built to incarcerate anyone determined to be an illegal immigrant.

Amit Shah, India’s powerful home minister and Mr. Modi’s right-hand man, has vowed to bring citizenship tests nationwide. A widespread belief is that the Indian government will use both these measures — the citizenship tests and the new citizenship legislation — to render millions of Muslims who have been living in India for generations stateless.

International organizations have sharply criticized the direction India is headed.

And the United States Commission on International Religious Freedom, a federal body, called the measure a “dangerous turn in the wrong direction” and said that the United States should consider sanctions against India if the bill passes.