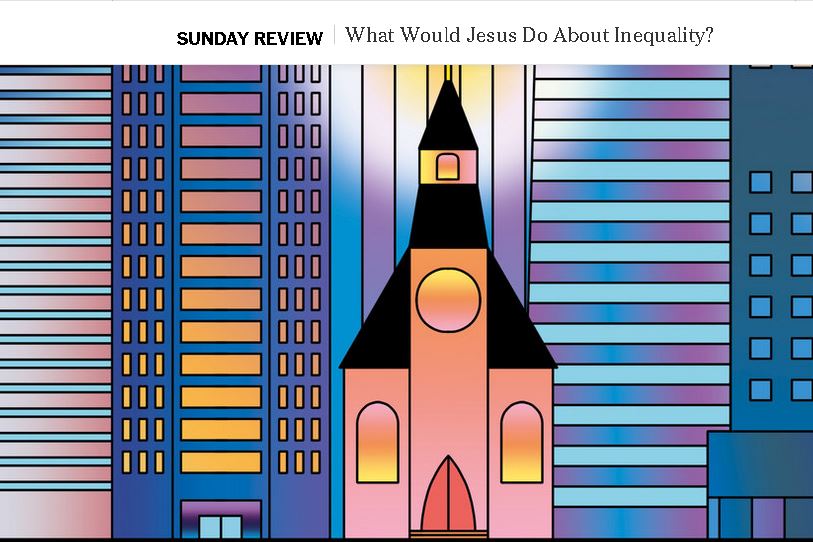 The New York Times demonstrated more strange new respect for Christianity in a prominent story by contributing opinion writer Molly Worthen, including a graphic that took up the entire front of the Sunday Review: “What Would Jesus Do About Inequality?”

They had come to talk about how they integrate religious faith with what they do for a living — how the lessons and community of Sunday worship can become “a church for Monday,” in the phrase of the conference organizer, Made to Flourish, a Christian ministry based in Overland Park, Kan., which works with churches in all 50 states….

It’s quickly obvious which direction the story is going.

In today’s evangelicalism, this is where the theological action is: the faith and work movement, the intersection of Christianity with the demands of the workplace and the broader economy — in a society that is one of the world’s wealthiest, yet persistently inhumane. In politics, responses to the American economy’s moral crisis usually split along the lines of the culture war. President Trump, still the darling of white evangelical voters, has hardly wavered from the Christian right’s tradition of faith in a lightly regulated market and weak social safety nets.

The evangelical faith and work movement used to be merely another trumpet for this peculiarly American political gospel. But in recent years the movement has become much more ideologically diverse — and far more interesting. Participants are moving beyond the idolatry of the free market to a conversation about economic justice that doesn’t align so neatly with culture war clichés or party platforms.

But Worthen found “a different cast of evangelicals” who “take more seriously all the ways the Bible challenges the exploitations of our new Gilded Age….” That we’re living in a new “Gilded Age” of corruption and inequality is gospel at the Times.

A cynic might wonder if conservative evangelicals have adopted the same marketing tactic as the Koch brothers and their conservative fund-raising network, who since about 2014 have rebranded their advocacy of deregulation and radical free-market economics as simply the promotion of human well-being. The Koch Foundation’s “Well-Being Initiative” cast laissez-faire economics not as an abettor of climate change and plutocracy, but as “the path to happiness” for all, as Jane Mayer put it in her 2016 book “Dark Money.”

….Dave Blanchard, one of the founders of Praxis Labs, an organization that supports Christian entrepreneurs, told me: “The line of taking Milton Friedman for everything he has to offer is falling out of favor. We’re in a time when we’re interrogating capitalism — a reformation project that shouldn’t be confused with socialist approaches.”

The editors liked the above bolded quote so much they made it the story’s text box.