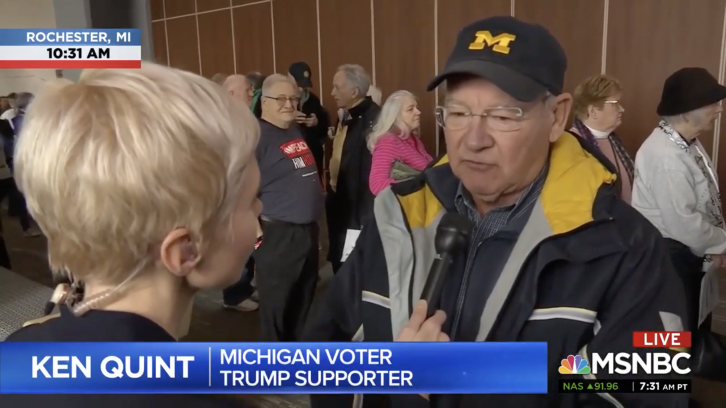 A Michigan voter told MSNBC that Rep. Elissa Slotkin’s (D., Mich.) decision to support impeachment will “seal the deal” on his opposition to her reelection.

Ken Quint, a Trump supporter who has attended Slotkin’s town halls but did not vote for her, said Democrats in Congress are wasting the country’s time with their impeachment push.

“I wanted to hear her logic on why she’s going for it. I think it’s wrong,” Quint told reporter Leigh Ann Caldwell. “I think the articles of impeachment, unfortunately, don’t delineate a crime and I think the Congress is wasting a lot of its time and our time.”

“I think this is going to seal the deal. I think I will not vote for her,” he said. President Donald Trump won Slotkin’s district in 2016.

Slotkin wrote an op-ed in the Detroit Free Press explaining her decision to support impeachment.

“To be clear, presidents from both parties have leveraged the powerful role of the United States to get foreign countries to do what’s in our interest. It’s quite standard, as senior U.S. officials wield leverage to increase our own national security,” she wrote. “But here’s the fundamental difference: President Trump used the power of the presidency for his own benefit, to give himself some advantage in the very election that would determine whether he remained in office.”

In September, Slotkin wrote an op-ed arguing that if the allegations against President Trump are correct, he committed an “impeachable offense.”

Slotkin’s decision to support impeachment comes at the same time new polling indicates public support for impeachment has dipped below public opposition to it.