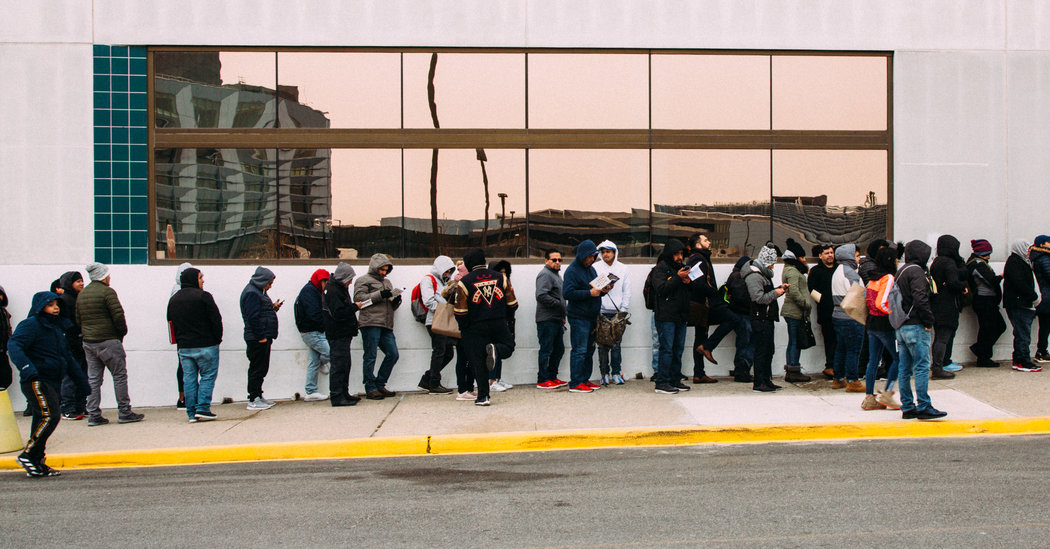 On the New York side of the Hudson River, lines outside some Department of Motor Vehicle offices stretched for blocks on Monday, as people sought to take advantage of new state law allowing undocumented immigrants to obtain driver’s licenses.

Lawmakers in neighboring New Jersey were expected to approve similar legislation on Monday, the same day New York’s so-called Green Light Law went into effect. A vote on the proposed bill was scheduled to take place in the afternoon.

The action unfolding in the two heavily Democratic states came against a backdrop of President Trump’s hard-line immigration policies that aim to limit entry into the United States and have included separating children from their parents at the border.

The administration’s moves set off an intense national debate over immigration — one that New York addressed in June, when lawmakers approved a bill allowing licenses for undocumented residents.

That move was celebrated by undocumented immigrants and activists alike. On Monday, offices in New York were swamped as people previously ineligible to apply for licenses lined up, documents in hand, to seek the legal right to drive.

In New Jersey, immigration activists and undocumented immigrants have also been fighting for years for the right to obtain driver’s licenses in a state with a large immigrant population that is largely defined by its suburbs and rural swaths, and where public transit often is unavailable or undependable.

Tasks like grocery shopping, commuting to work, taking a child to school and visiting a doctor all hinge on the ability to drive legally, supporters have argued.

“It’s about survival,” said Eva Gomez, 39, an undocumented immigrant from Mexico who lives in Passaic, N.J.

Another immigrant, Margarita Rodriguez, a 37-year-old single mother of three from Mexico, said, “For too long immigrants have been in the shadows. It’s time for us to come out of the shadows.”

A spokeswoman for the state Department of Motor Vehicles said its offices were seeing larger crowds on Monday, as officials had anticipated.

Lines at D.M.V. offices in New York City snaked around buildings. At one branch in the Bronx, workers went outside around 12:30 p.m. to inform people in line that the office’s testing room was full.

By that point, Roldan Martinez, 33, who said he was applying for a license for the first time, had waited in line for an hour.

In Flushing, Queens, despite the cold and snow flurries, the line at a D.M.V. office was full of people excited about the opportunity the new legislation had given them.

She said she was not surprised by the length of the line, but added that she came on the first day because she did not trust that the window of opportunity would last.

“It will make a big difference,” she said. “You can do a lot of things with a driver’s license.”

Carlos Alfredo Guaman, 44, said he arrived at the office in Flushing just before 8 a.m. By 1:30 p.m., he was perhaps halfway to the entrance.

“Twenty-five years ago my dream was to drive a motorcycle, but dreams change,” said Mr. Guaman. “Now I just want to feel what it is to drive a car. I’m 44, I never had a chance.”

Mr. Guaman, who is from Ecuador and works in construction, said he first tried getting his license in New York in 1999. One particularly difficult hardship for him has been trying to visit his uncle in Yonkers using only public transportation.

But if he gets a license, Mr. Guaman has a farther destination in mind.

“Get a car and go to Disneyworld,” he said.

In sharp contrast with the enthusiastic attitude of those seeking licenses, the state’s new law continued to be met with resistance from county clerks in conservative areas upstate who oversee Motor Vehicles offices and who have said they would refuse to issue licenses.

The clerk in Rensselaer County, Frank Merola, said on Monday that his office would not be accepting applications from undocumented immigrants, arguing that his employees did not have the training or expertise to determine if foreign passports were legitimate.

“In all the years I’ve been here, we’ve never taken foreign documents,” Mr. Merola said, in an interview. “Now they want us to stand at the counter and make a judgment.”

Mr. Merola, a Republican, said his decision was practical, not political. Those wanting to apply in Rensselaer were being sent to a larger office in Albany, he said. Officials at that office seemed to be ready to process applications, with two employees greeting customers at the door.

In New Jersey, where all licenses are issued by the state Department of Motor Vehicles, activists did not anticipate a similar hurdle. But the legislative action in Trenton still followed years of effort by activists to allay both opponents’ philosophical objections and supporters’ fears that a “yes” vote could be politically fatal.

Others in New Jersey warned of unintended consequences: undocumented immigrants who are inadvertently registered to vote when obtaining a license; the risk migrants’ private information could be shared with federal immigration authorities; and migrants who come to the state only to obtain a license.

“I’m concerned it’s going to open the door to an underground black market,” said the Rev. Philip Rizzo, the pastor of City Baptist Church in Hoboken and North Bergen.

The licenses would not be valid as identification for air travel, and would be distinct from the Real ID licenses that beginning next year will be required at airport security checkpoints. The precise documentation that can be used for applications will be determined at a later date.

Brenda S. Fulton, the administrator of New Jersey’s Motor Vehicle Commission, has said that offering licenses to undocumented immigrants would boost the number of insured drivers. “Our roads are safer when our drivers are trained, tested and insured,” Ms. Fulton testified last week.

But in a state with the nation’s fifth-largest population of undocumented residents, migrants spoke of the benefits of licenses in far more personal terms.

Ms. Gomez described the difficulty for her 11-year-old son to transport his music instrument to school, since she has been unable to drive. The boy, she said, borrowed a baby stroller and uses it to push his saxophone on the 30-minute walk.

“It’s hard to walk that far,” said Ms. Gomez, who has been living in the United States for 13 years.

Ms. Rodriguez lives in Passaic and works nights in a warehouse in Clifton. When her shift ends at 7 a.m., she takes a van provided by the company for employees who do not drive to work.

The two women are among the estimated 450,000 undocumented immigrants of driving age living in New Jersey.

The economic benefits to the state go beyond an individual’s ability to work, according to an analysis by New Jersey Policy Perspective, a left-leaning think tank. The group projected a $21 million increase in revenue over three years from license-related fees and taxes on the anticipated uptick in sales of gasoline, cars and car parts.

Washington, New Mexico and Utah, which has long been controlled by Republicans, were among the first states to approve licenses for undocumented immigrants based in part on arguments that it would lead to fewer hit-and-runs as well as increased revenue and trust between immigrants and the police.

Halexther Rivero was 3 when she left Venezuela with her mother and sister and arrived in the United States, which made her eligible for the Deferred Action for Childhood Arrivals, or DACA, the law that shielded from deportation people who were brought into the country as children. But Ms. Rivero did not apply before Mr. Trump ended the program in 2017.

Ms. Rivero, 20, is majoring in biology at a community college in Newark. After class, she takes the bus home to Elizabeth.

“When you’re coming out at night it’s pitch black,” Ms. Rivero said. “I would feel 10 times safer just being able to drive home.”