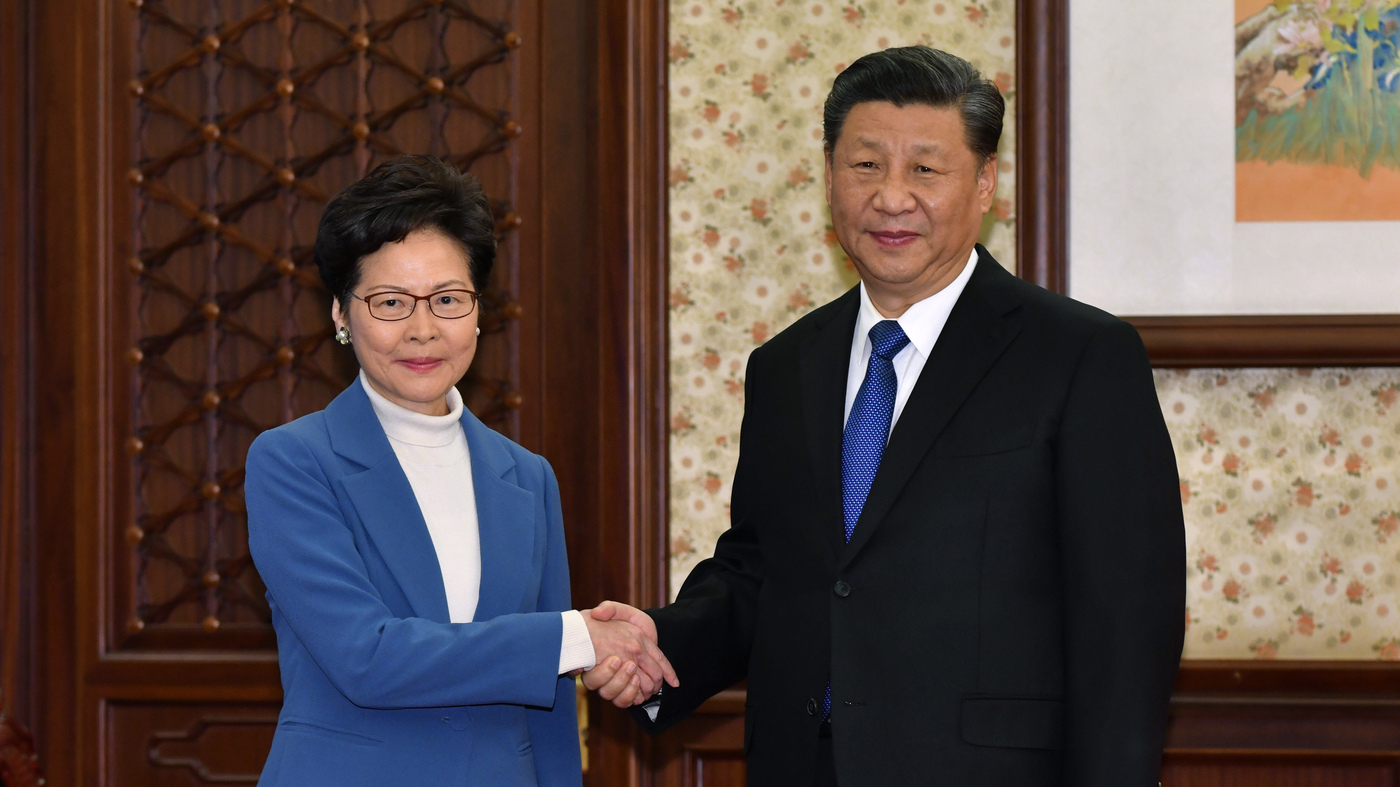 Hong Kong Chief Executive Carrie Lam sips from a mug during her news conference Monday in Beijing, after meeting with Chinese officials over the continued unrest roiling the semi-autonomous region. 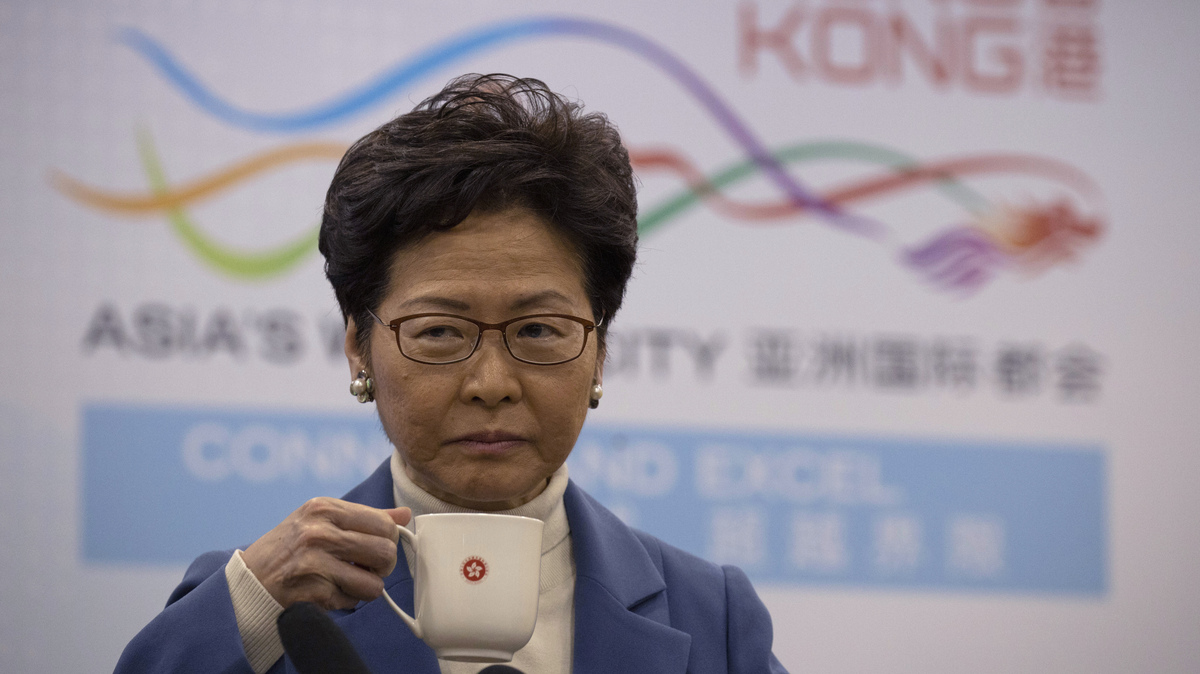 Hong Kong Chief Executive Carrie Lam sips from a mug during her news conference Monday in Beijing, after meeting with Chinese officials over the continued unrest roiling the semi-autonomous region.

During Lam’s third annual duty visit to Beijing on Monday, the embattled leader got public professions of support from Chinese President Xi Jinping and Premier Li Keqiang, with whom she also discussed the Hong Kong protests behind closed doors.

“The situation in Hong Kong in 2019 was the most complex and difficult since its return to the motherland,” Xi told Lam in front of a scrum of local media, according to a Reuters translation, shortly before continuing their conversation in private. “The central government fully recognizes the courage and assumption of responsibility you have displayed in these exceptional times in Hong Kong.”

The words of encouragement likely come as a relief to Lam, whose government has absorbed a series of body blows since massive protests erupted in June.

Initially driven by anger at a bill that would have facilitated extradition to China, protesters have expanded their demands to include probes of police violence and better bulwarks to protect Hong Kong’s democratic systems. And they persisted in their protests even after the extradition bill’s formal withdrawal a couple of months ago. 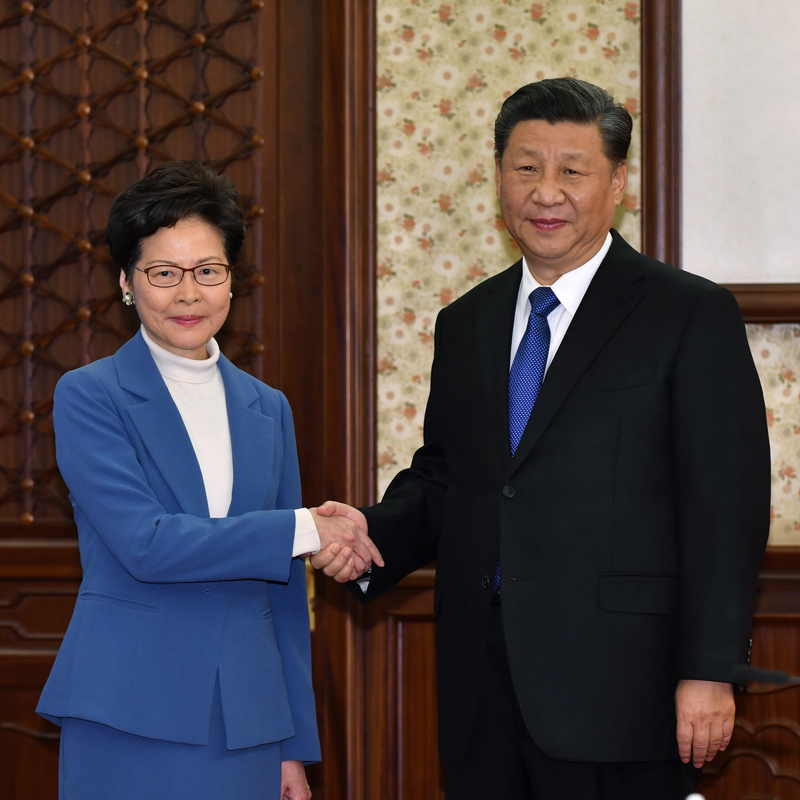 In a photograph released by the Hong Kong government, the region’s chief executive, Carri Lam, shakes hands with Chinese President Xi Jinping in a gesture of solidarity Monday in Beijing. 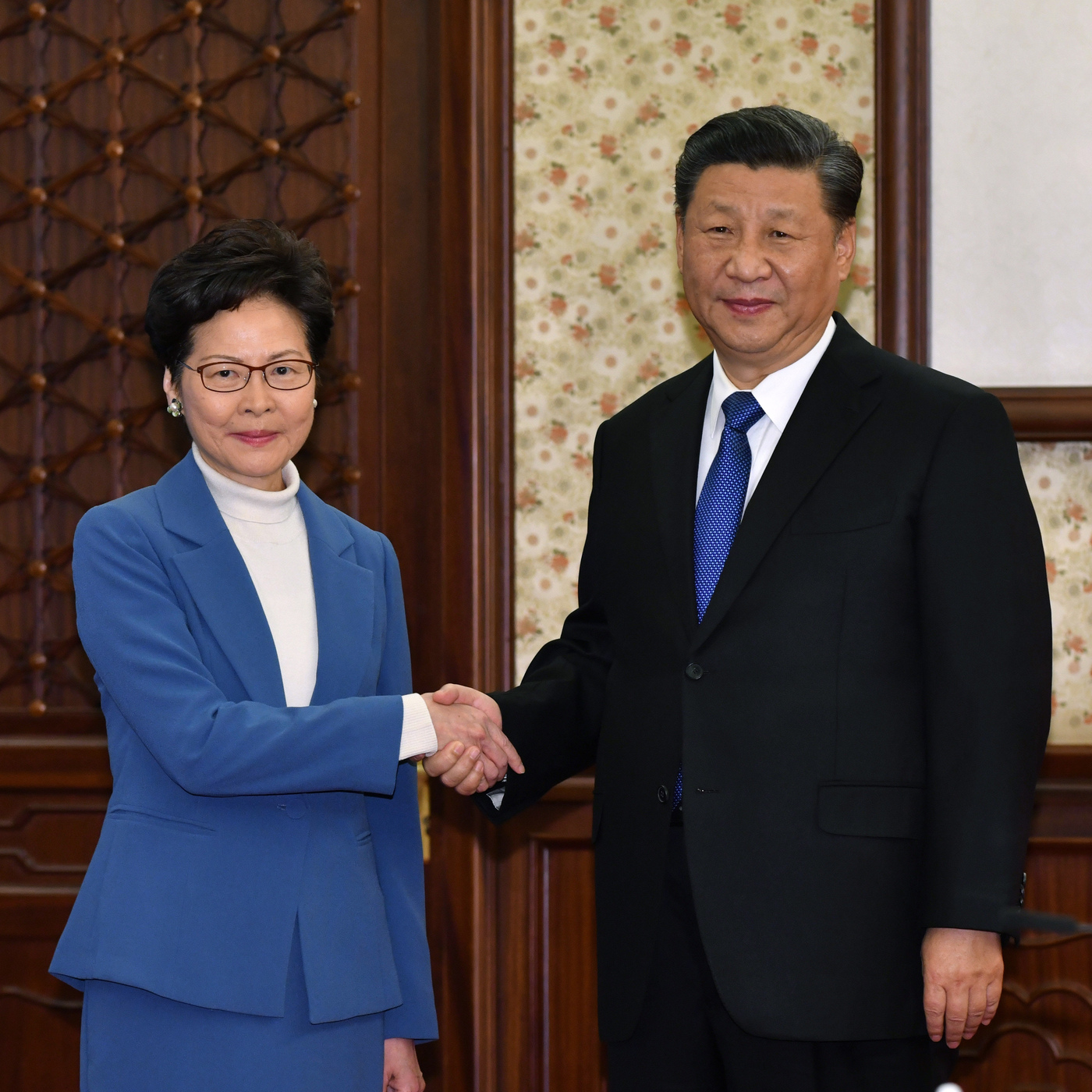 In a photograph released by the Hong Kong government, the region’s chief executive, Carri Lam, shakes hands with Chinese President Xi Jinping in a gesture of solidarity Monday in Beijing.

Last month Lam suffered another embarrassment — this time not in city plazas but at the ballot box, where voters swarmed in record numbers to hand pro-democracy candidates commanding control over the region’s 18 district councils. The local elections, usually a dreary, underattended affair, became a striking pronouncement against Lam’s government, one that even she acknowledged as a sign of “people’s dissatisfaction.”

So the continued public support of leaders in Beijing — whose backing enabled Lam’s election in 2017 and who have repeated buttressed her position since then — offers no small boon to a Hong Kong leader whose support has eroded at home.

“Given the severity of the situation and the difficulties that we are facing, I can say that the leaders are fully appreciative of the efforts needed,” she told journalists Monday, according to The Associated Press. “I am heartened because we know that our work to stop the violence hasn’t ended. We are not out of this crisis yet.”

One need not look hard for evidence of that continued crisis.

Back in Hong Kong, in the major shopping district of Mong Kok in the city’s Kowloon district bordering mainland China, clashes once more erupted between police and a crowd of protesters, during which officers fired tear gas and liberally used pepper spray to disperse the throng. Local law enforcement said that in several different incidents demonstrators prompted the use of force by setting fires and throwing bricks, trash and other “hard objects” at the officers.

That same day, demonstrators showed up to shopping malls in droves, many dressed in black for a number of dramatic protests that were caught on film and circulated widely Sunday — including in the Hong Kong-based South China Morning Post.

Since the protest movement began in earnest more than half a year ago, authorities say police have arrested more than 6,100 people — nearly 40% of whom are students. Many people in Hong Kong have been expressing their support for the protesters who are still detained by writing them Christmas cards with encouraging messages.

“The protests have affected how the world views the Chinese Communist Party. In the past 20 years, the world only saw the economic benefits that it brings,” one housewife and activist perched at a card collection table outside a busy subway station told NPR’s Julie McCarthy.

“But now they realize it could affect world order, and that it’s a threat to freedom and democracies around the world,” the activist said. 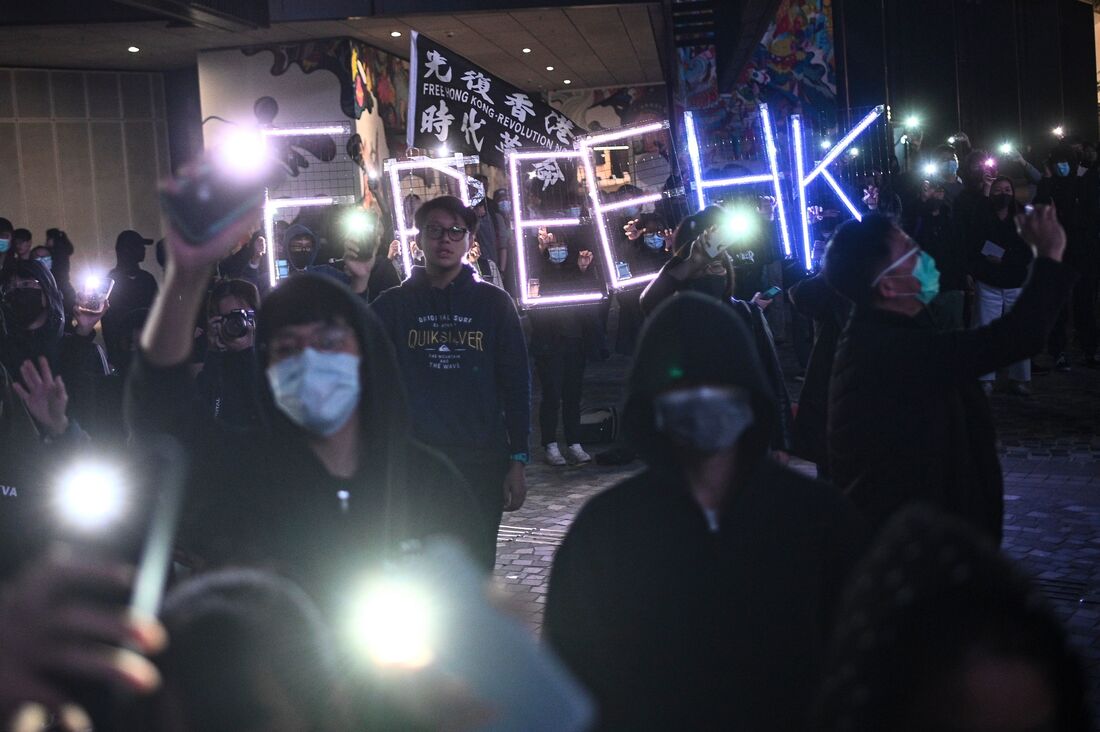 Students gather for a demonstration Friday in the Tsim Sha Tsui district of Hong Kong, where they raised a “Free HK” light installation and sang “Glory to Hong Kong” in support of the protest movement. 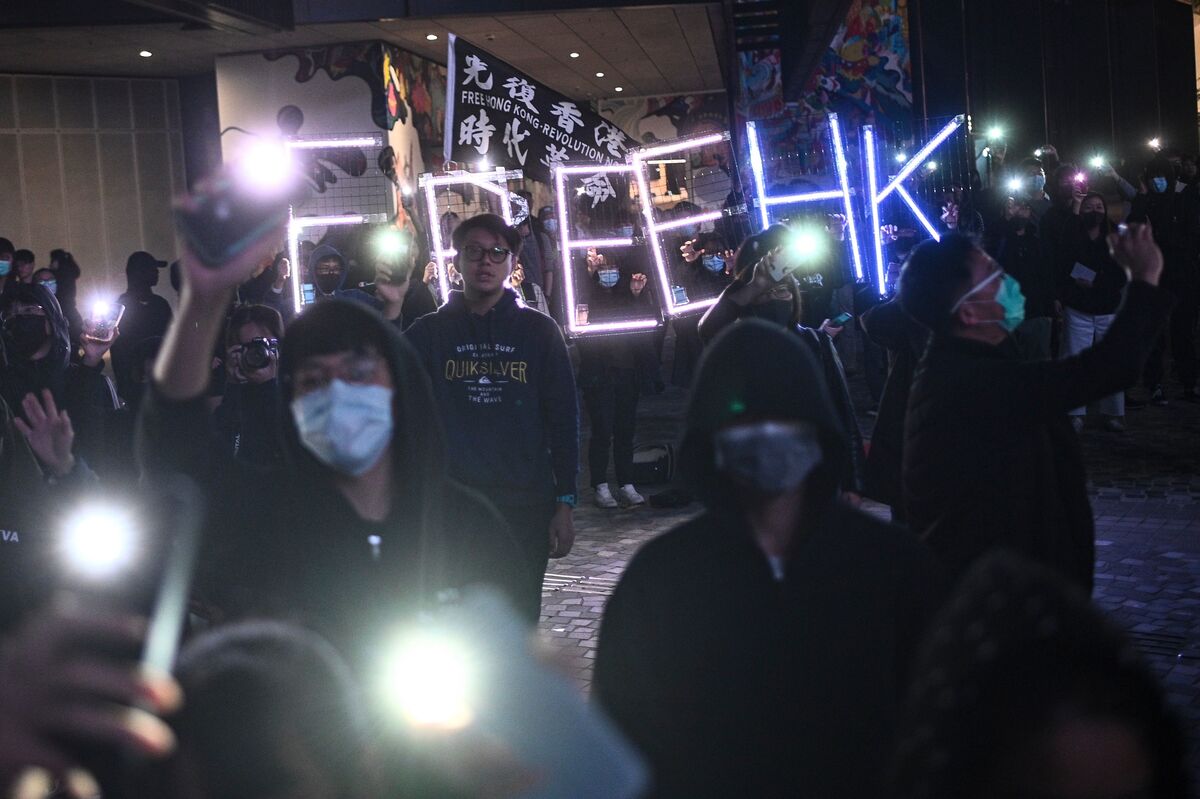 Students gather for a demonstration Friday in the Tsim Sha Tsui district of Hong Kong, where they raised a “Free HK” light installation and sang “Glory to Hong Kong” in support of the protest movement.

A former British colony, Hong Kong was returned to Communist China in 1997 on the assurance that the region would remain semi-autonomous, under a principle of “one country, two systems” — in other words, that it could largely maintain its democratic and independent judicial traditions despite loose control from Beijing.

Lately, though, critics have condemned what they see as China’s increasing encroachment on the region’s politics, governance and even its media landscape.

During Lam’s visit Monday, the international Committee to Protect Journalists published a report alleging that China — notorious for its censorship practices — has been seeking to exercise greater control over the local flow of information.

“In Hong Kong, Chinese interests dominate commercial media. Police have repeatedly attacked reporters covering anti-government protests, so far without consequence. Local journalists are concerned that Beijing will retaliate for their critical reporting by blocking them from entering the mainland to work, while international correspondents fear their permission to stay in Hong Kong could be taken away. Digital security and the future of internet freedom feel precarious.”

Asked about the report during a briefing Monday, Chinese Foreign Ministry Spokesperson Geng Shuang brushed aside the accusations.

“I haven’t read this report,” said Geng, “but it is not the first time for institutions like that one to publish such reports. Those false words are not even worth refuting. Anyone with an objective and fair mind has a clear judgment on press freedoms in China.”

Meanwhile, in Beijing, Lam projected confidence in her position, rebuffing the continued calls for an independent inquiry into police violence — one of the key pillars of protesters’ demands. She said the police watchdog group to whom she has deferred the investigation, the Independent Police Complaints Council, must be “given space and time” to pursue its work.

This, despite the recent resignations of several of the council’s foreign experts, who announced their departure last week after concluding that the group had not been allowed enough “powers, capacity and independent investigative capability” to do its purported job.

Lam’s confidence Monday was fitting, particularly with Xi publicly in her corner.

“Facing difficulties and pressure, Chief Executive Lam has stood firm on the ‘one country, two systems’ principle, governed in accordance with the law, and remained dedicated,” he said Monday. “You did plenty of work in difficult situations.”