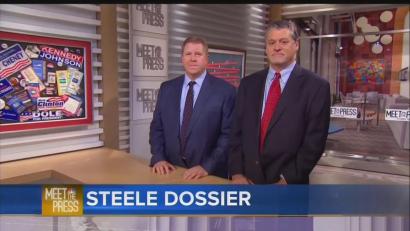 Glenn Simpson and Peter Fritsch, the deluded duo of former journalists behind Fusion GPS, the Democratic opposition research group responsible for the discredited “dossier” from British spy Christopher Steele, has put out a calling card across the Pond with the British paper The Guardian.

It appeared the day before Labour leftist leader Jeremy Corbyn got thrashed at the polls by the Conservative Party and Prime Minister Boris Johnson: “Britain needs its own Mueller report on Russian ‘interference.’”

Simpson and Fritsch, who helped snarl theTrump administration in years of bad-faith investigations, is aiming for new markets now that the U.S. establishment has belatedly gotten wise, after a devastating Inspector General report documented how the FBI dishonestly used the dossier to spy on Trump campaign staffer Carter Page (click “expand”):

The British political system has become thoroughly compromised by Russian influence. It’s high time its institutions — including the media — woke up to that fact. In 2016, both the United Kingdom and the United States were the targets of Russian efforts to swing their votes….

The efforts in both countries had much in common. They were aided by a transatlantic cast of characters loosely organised around the Trump and Brexit campaigns. Many of them worked in concert and interacted with Russians close to the Kremlin….

Our Washington-based research firm, Fusion GPS, conducted much of the early investigations into Russia’s support of the Trump campaign, aided by our colleague Christopher Steele, the former head of MI6’s Russia desk. While our initial focus was on Russian meddling in US politics, it has since become increasingly clear that Britain’s political system has also been deeply affected by Russian influence operations.

Such as? They continued:

….For the past three years, the US has undergone a messy and boisterous effort to understand the extent of Russian influence on the 2016 election and beyond. There have been multiple congressional investigations with the power to compel documents and testimony from witnesses. There was a two-year investigation by special counsel Robert Mueller.

And which amounted to nothing. Still, they had evasive excuses (click “expand”):

All of these investigations have been imperfect. The congressional investigations often devolved into farce as Trump’s political allies decided to investigate the investigators instead of Russia’s attack. The Mueller report’s damning findings were obfuscated by lawyerly language and twisted beyond recognition by Trump’s loyal attorney general. Mueller interpreted his mandate narrowly, leaving crucial questions unanswered.

Many US institutions have shown more backbone and independence than their UK counterparts. Some of those who served in the Trump administration, such as the British-born Fiona Hill…

It’s galling that Fusion mentioned Hill without noting her dismissal of their infamous “dossier.”

….Conservative-leaning media in both countries see little advantage in uncovering Russian meddling that would appear to undercut their own political preferences….

How Russia is actually interfering in Great Britain is left oddly vague (perhaps you must pay them to find out?). But The Guardian previously covered one angle, with Russia intervening – for Jeremy Corbyn

Blogger Ace of Spades has an entertainingly merciless takedown of the op-ed.