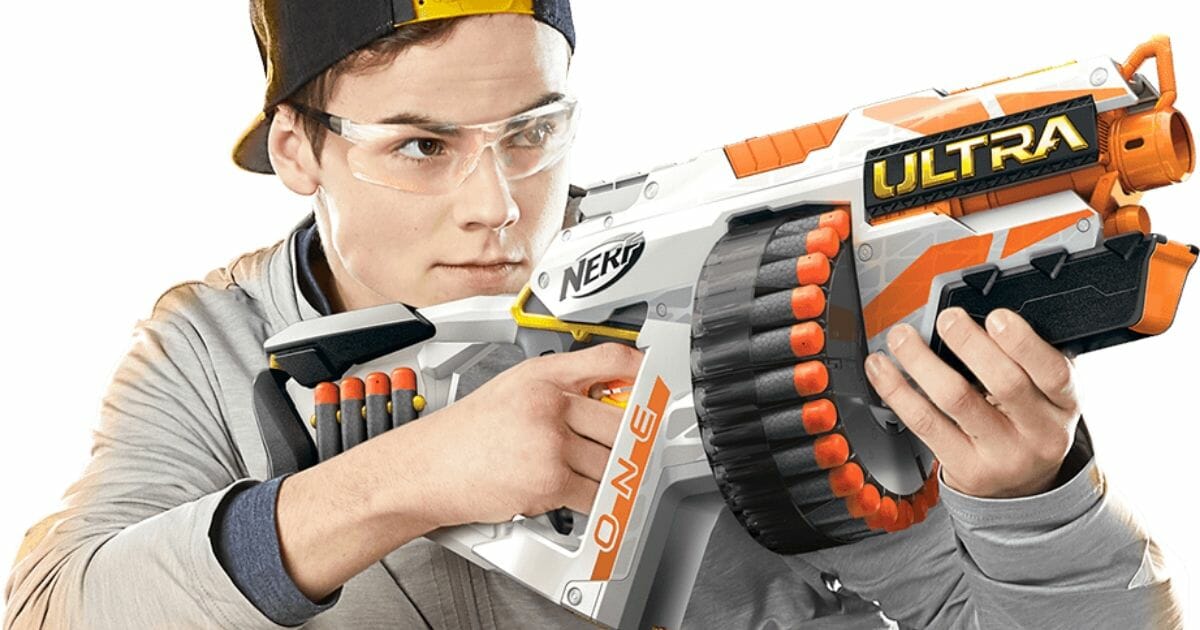 The Empire State Consumer Project has set its sights on the Nerf Ultra One, according to WROC-TV in Rochester.

“As we watch holiday toy commercials, we see the Nerf Ultra One and other extreme Nerf machine guns for children and are reminded of mass shootings that have devastated American children and families for decades now,” the group said in a letter to Hasbro.

The letter tales particular exception to an ad for the toy in which a collection of slightly goofy adults are gleefully toting Nerf Ultra Ones.

“Toy guns are one thing, but these emblems of mass destruction take them to the next, horrifying level,” the Empire State Consumer Project said in its letter.

“How does promoting play with huge automatic weapons create joy, creativity and connection around the world, and across generations, and make the world a better place for children?” the group said. “How do these weapon products use your business as a force for good? Who would this child be shooting with his cache of assault weapons?

Do you think these Nerf guns should be banned?

“If your research shows that children are craving toy assault weapons, you have missed the mark.”

The group then scolds Hasbro.

“Marketing assault weapon toys to this most vulnerable group of consumers is an assault on their dignity and their worth as human beings,” the Empire State Consumer Project said in the letter. “We implore you to remove assault-style toy weapons from your product offering.

“Social responsibility asks for a connection between the hearts of board members and the people who generate their profits, in this case, the children. Be responsible to these children; be leaders on this issue …  your shareholders will thank you.”

Would you want the Nerf Ultra One Blaster? 😮 #GGHitlist pic.twitter.com/1ACfYfIa5S

“It’s a matter of this being a very vulnerable consumer group. Children buy what they see, and we’re not sure this is driven by market demand for assault weapon toys by children or the industry creating the demand,” she said.

Not everyone agreed. Writer Megan Fox had a strong response to the group in a column for PJ Media.

“It isn’t just the Second Amendment under assault in blue America; the crazed anti-gun nuts want to take away your Nerf guns too! Leave it to New York to start this idiotic idea,” Fox wrote.

“The commercial is dumb, but it’s not advocating for violence, since Nerf guns can’t hurt anyone. But the busybodies at the Empire State Consumer Project want to make sure your kid is only having leftist-approved fun and that means … nothing boys naturally like,” she wrote.

Fox portrayed the letter as part of a wider attempt to remake boys in the image of the political left.

“There is nothing good that can come from the constant assault on boyhood,” she wrote. “This whiny letter to Hasbro demanding they remove the only play weapons of war left on the shelves is yet another example of it. If the nincompoops who wrote it manage to get their ideas in front of New York lawmakers, it’s almost a certainty they’ll outlaw the toys. …

“My suggestion is to go out immediately and buy as many Nerf guns as you can before they gone.”