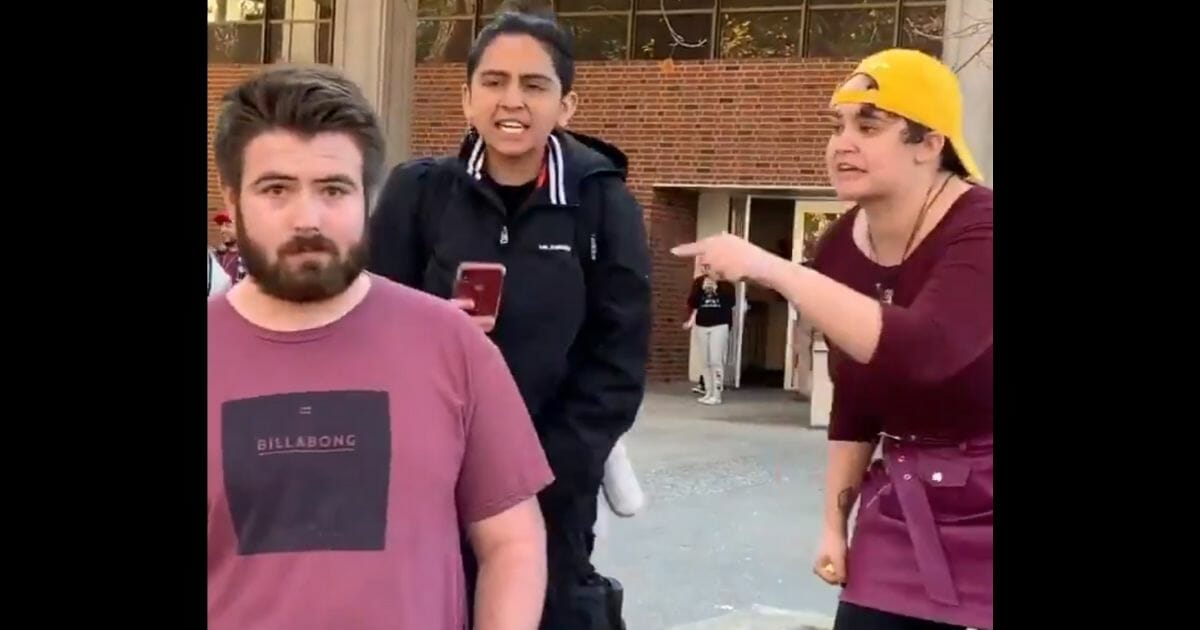 The executive board of the California Faculty Association, Chico Chapter said, deep into a recent dispatch about battles between leftist students and College Republicans at Chico State University, that “the hypocrisy of right-wing political voices crying out that they are being silenced is absurd. No one in authority is silencing them.”

This came at the tail end of a dispatch from the educators union in which:

a) It completely elided the fact that College Republicans had been assaulted by these leftist students.

b) It claimed that the very name of the president “was actually a signal and symbol of insult, derision, and ridicule of specific groups within our society.”

c) It said the College Republicans, much like Donald Trump, were associated “with white supremacist ideas.”

d) It created a “context” for the assaults in which “acts of harassment and even physical abuse on the basis of race, gender, and perceived sexual orientation” had been ongoing.

So, if you think there’s any silencing of right-wing political voices on campus, don’t worry. These are the nonpartisan defenders of free speech in academia who will ensure conservatives don’t face discrimination based on their views.

In case you missed it, the whole thing went viral when the College Republicans at Chico State were going to host a #WalkAway event featuring movement founder Brandon Straka.

As organizations are wont to do on college campuses, the College Republicans promoted the event through “tabling” — the old-fashioned campus recruitment method of putting out a table and trying to get people to join the club and come to the event.

Some activists didn’t like this and, according to TheBlaze, harassed them via loud music.

At one point, one of the activists produced a “Black Trans Lives Matter” sign and stood in protest. Michael Curry, president of Chico State’s College Republicans, got up with a sign that said “All Lives Matter” and stood beside her. Hilarity and/or assault transpired.

WARNING: The following videos contain vulgar language that some viewers may find offensive.

Here is the video from the Battery today at @ChicoState. College Republicans across the nation experience treatment just like this on their campuses. It has to stop! @realDonaldTrump @californiafcr @scrowder @benshapiro @FoxNews @BrandonStraka pic.twitter.com/0Iew1sEGda

Even though the conservative wasn’t really that close to her, the liberal shouted, “Get the f— out of my f—ing face!” while ripping the sign out of the conservative’s hand and attempting to hit him.

Things didn’t get any better when Straka came to campus, either.

Protest at @ChicoState against me speaking for the #WalkAway event here tomorrow at Chico State University, CA.I didn’t engage w/ the students at the protest at all. Literally just came to film this promo. This is what happened…TIX for tomorrow:https://t.co/owwJ6T9FMa pic.twitter.com/UbjqlMaPHt

Tonight I speak at @ChicoState. Yesterday student protestors became violent, rageful, unhinged, & menacing to me & the college republicans hosting me. They told me I should be aborted &called my assistant a “dumb white bitch”.This is the modern left. We must destroy liberalism. pic.twitter.com/lxaVHTfB4n

Yeah, there’s nothing that’s going to make your point as eloquently and as tolerantly as saying of Straka that “his mom should’ve had a f—ing abortion.”

If you want more of what’s been happening to conservative students at Chico State, you can look at Michael Curry’s Twitter account.

But maybe there’s another side to all this, which is what the California Faculty Association, Chico Chapter wanted to set out to prove in its dispatch.

Or, in the group’s words, it was going to offer “some responses to the white supremacist ideas expressed on our campus in the week before the Thanksgiving Holiday.”

Do you think conservatives are discriminated against on college campuses?

“We are living in strange times when a student organization displaying banners and signs supporting reelection of the sitting president can be experienced as an act of racist provocation, but we must be honest,” the letter, issued Tuesday, read.

“There has not been another president in US history whose very name was actually a signal and symbol of insult, derision, and ridicule of specific groups within our society. It would be disingenuous to deny that Trump has this impact as he is clearly associated, by design, with white supremacist ideas. Further, the recent release of emails from White House Aid Stephen Miller demonstrate that he has promoted white supremacist ideas in his communications.”

Miller, indeed, is at the center of some controversy for alleged emails he sent during his time as communications director for then-Sen. Jeff Sessions. The rest of that is arrant nonsense, liberal puffery and standard-issue guilt by association.

“Some aspects of this situation are simple,” the letter continued. “Student organizations absolutely may reserve space for a booth that displays their candidate’s name. There can be no question that such political speech is absolutely protected by the First Amendment. But the problem happens when we stop the conversation at this single, obvious point.

“While the conversations we need to have — on campus and throughout our society — must include the parameters of protected First Amendment speech (and what time/place/manner restrictions are permitted and appropriate under various circumstances), the conversations must not be limited to those principles.

“To fail to acknowledge the context in which the protests on campus in November occurred does a disservice to the members of our campus community who have been targeted by ongoing acts of harassment and even physical abuse on the basis of race, gender, and perceived sexual orientation in the past weeks and months. The context of this targeting and harassment, and the failure to respond effectively to fully acknowledge the harms being done and to fully protect these students, staff, and faculty from hateful comments and actions, adds insult to injury and leaves many in our community frustrated and demoralized.”

Now, at no point are any statistics of these “ongoing acts of harassment and even physical abuse” documented or are examples provided. Unlike the videos on Curry’s Twitter account, there isn’t corroboration here.

However, the CFA assures us that “[t]o many students it appears that discipline has been meted out quickly with unseemly haste against students who object to racism, while consequences for the racist provocateurs has been muted.”

“We must do better at protecting targeted students from the harmful impacts of ignorant racist, sexist, and other oppressive behavior and speech,” the letter said. “We stand with our students. We see the efforts to provoke them. We see the insults. We are here to work with them to create responses that allow them to express their frustration, even their rage, at such insult and threats in a manner that does not set them up to be punished.  Such punishment reinforces the long history this society has of silencing minority voices.

“Finally, the hypocrisy of right-wing political voices crying out that they are being silenced is absurd. No one in authority is silencing them. Rejecting the abusive, insulting, and corrupt president/candidate they support is not punishment. They face no disciplinary sanction for such demonstrations (and have not even been punished for the far more harmful and disgraceful off-campus events they have arranged in which targeted groups and individuals are ridiculed and harassed).

“But just because they have a right to express their views does not in any way mean we have to sit by, silently, and pretend that such views are not offensive and even provoking to many members of our community. Because, make no mistake, they are.”

In short, because ideas are “provoking,” all of what happened is all right. The harassment, up to and including assault, of conservative students, since it didn’t happen in a vacuum, ought to be excused.

Now, the CFA is a union, which means (wonder of wonders) its take on this skews toward the left. But there’s the rub: This is a union comprised of educators at state universities in California. In other words, this is the official opinion of the collective bargaining organ of the men and women who teach these students. The very name “Trump” to them is a white-supremacist insult. If you’re a College Republican, guess what that makes you.

There’s a strange, discomfiting irony in the fact that the CFA set out to prove, in part, “the hypocrisy of right-wing political voices crying out that they are being silenced” on public university campuses in California.

If that’s what they expected the takeaway would be, perhaps they ought to have re-read this one before they clicked send.