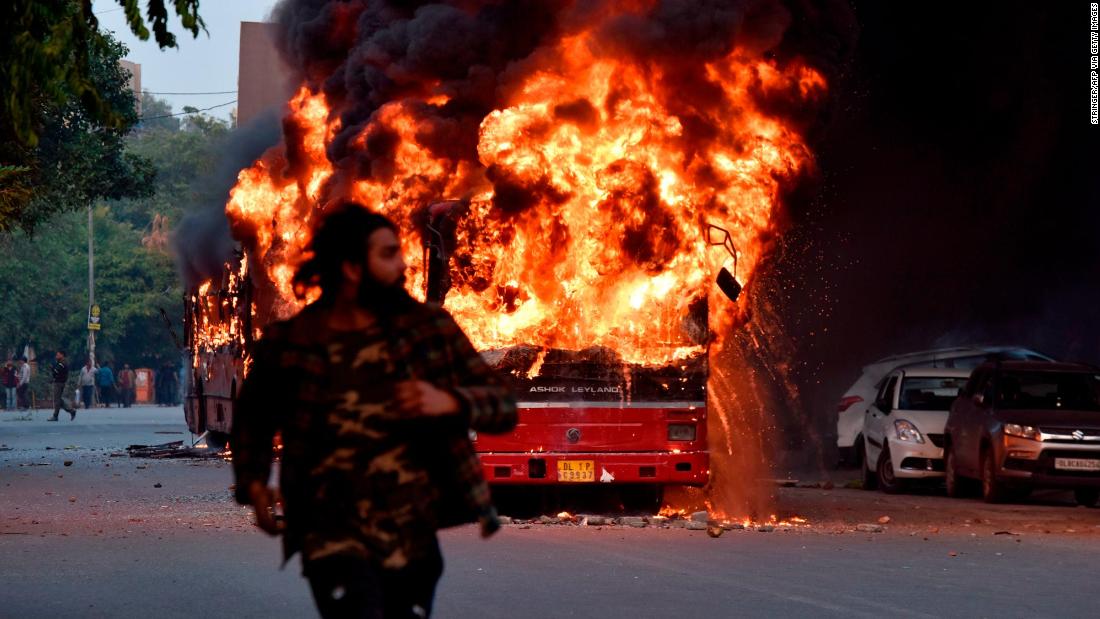 Protests broke out across nine states, including in major cities such as Kolkata, Mumbai, Chennai, Hyderabad and the capital New Delhi, mostly around university campuses. Meanwhile, ongoing protests in Assam, in India’s northeast, turned violent, with at least five people killed, police said.

In Delhi, students began demonstrating at the prestigious Jamia Milia Islamia university early Sunday, with around 2,000 people taking part at the protest’s peak. Hundreds of people were injured in the protests, and dozens arrested, as well as significant damage to the campus, said Najma Akhtar, the university’s vice chancellor.

Police said the protest turned violent when some students refused to disperse, and set fire to public buses. Police then used tear gas, said senior Delhi police official Chinmoy Biswal. Several students were detained at two police stations, but have since been released.

Anger has been growing nationally over the Citizenship Amendment Bill (CAB), which was signed into law last week. The bill promises to fast-track citizenship for religious minorities, including Hindus, Sikhs, Buddhists, Jains, Parsis and Christians, from Afghanistan, Bangladesh and Pakistan who arrived before 2015.

But the exclusion of Muslims — which Indian Prime Minister Narendra Modi says is because they are not minorities in India’s neighboring countries — has raised concerns about the bill’s constitutionality and the growing anti-Muslim rhetoric in India.

Many in Assam and Tripura, states in India’s northeast, also fear that it could see large numbers of Hindus migrating to the region, outnumbering the region’s 200 distinct indigenous groups and changing its religious and ethnic makeup.

There are around 16 million Hindus in Bangladesh alone, and naturalizing large numbers of immigrants could also greatly impact employment, government subsidies and education.

The protest at Jamia Milia Islamia was not organized by the university or its students, according to its vice chancellor Najma Akhtar. “From the areas around the university, a call had gone out for an organized protest,” she said.

Akhtar said protesters broke through a gate at the university, pushing guards aside, then hid in a college library. She said some students were beaten by police officers in the library and were being treated for their injuries.

Akhtar said police did not have permission to come on campus. Some students told Indian media that officers forced their way into student accommodation and the library and dragged students out.

One student protester, 21-year-old Hanzala Mojibi, said he was among the group who ran from the police advance into the library.

“We were about 200-300 people who were trapped inside,” he told CNN. “We tried to negotiate with the police to not use violence. But they surrounded us and took our phones and broke them. They broke the CCTV cameras installed there.”

“We were made to kneel on the ground for 30 minutes and at any time they heard any students resisting, they would beat us in retaliation,” he added. “Afterward they told us to leave the college.”

“We are also doing everything possible at our end. Real miscreants who caused violence should be identified and punished,” he added.

Modi and his Bharatiya Janata Party (BJP) have described the citizenship bill as a means of protecting vulnerable groups from persecution, but critics say the true target is India’s minority Muslim population and that it risks undermining the country’s secular constitution.

“Today marks a dark day in the constitutional history of India,” Sonia Gandhi, president of the opposition Congress Party, said in a statement. “The passage of the citizenship amendment bill marks the victory of narrow-minded and bigoted forces over India’s pluralism.”

Another leading Congress figure, Rahul Gandhi, said last week the law was an attempt to “ethnically cleanse the Northeast. It is a criminal attack on the Northeast, their way of life and the idea of India.”

Protests have been ongoing in Assam and Tripura since the bill was passed into law. A large military presence has been deployed to the region, where internet access has been cut off. On Friday, hundreds of people joined a hunger strike demanding the bill’s withdrawal.

At least five people died in the protests in the region Sunday, with more than a hundred people injured, including police officers, said police official G. P. Singh. He added the government was reviewing whether to restore internet access.

Critics of the CAB say it is another example of how Modi and his BJP party have pushed an agenda of Hindu nationalism onto secular India, a country of 1.3 billion people, at the expense of its Muslim population.

The bill comes months after Modi’s government stripped the majority-Muslim state of Jammu and Kashmir of its autonomous status, essentially giving New Delhi more control over the region’s affairs and enabling mass Hindu migration to the region.

That same month, nearly 2 million people in Assam were left off a controversial new National Register of Citizens, which critics feared could be used to justify religious discrimination against Muslims in the state.