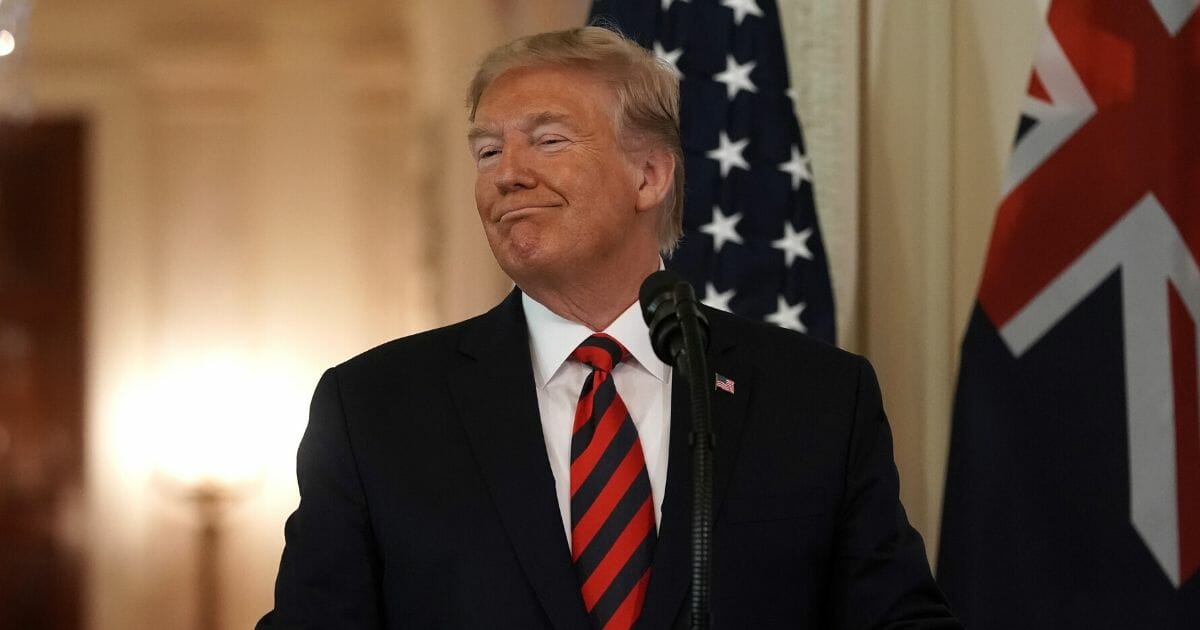 Weeks of constant attacks on President Donald Trump in the form of impeachment hearings, with the unfailing support of the anti-Trump media, have failed to move Americans much at all toward support for forcing Trump out of office.

Now, as word spreads that a freshman Democratic congressman – New Jersey’s Jeff Van Drew — is not only against impeachment but is actually likely to switch to the Republican Party over the issue, Democrats are circling the media wagons as quickly as they can, apparently to corral the spread of dissent.

But as even an apparently worried CNN columnist is pointing out, there’s no way to spin this as anything but good news for the Trump White House.

In fact, as the typically liberal Chris Cillizza put it, “Christmas came early for Trump.”

That’s not the Democrat Party line, of course. Nor is it the angle of the story Americans can expect to see played up in the mainstream media.

For the Democrats, the story of Van Drew’s apostasy is going to be simple political calculation. As a vocal critic of his party’s impeachment drive, that argument goes, Van Drew has put a target on his own back for the next Democratic primary, so jumping parties is his only hope of staying in office.

New York Rep. Jerry Nadler, who’s been filling (almost literally) American television screens from his perch as chairman of the House Judiciary Committee, made that argument on ABC’s “This Week.”

“What he’s reacting to is public polling that shows he can’t get renominated,” Nadler said, according to Politico. “His electorate in his district is 24 percent to renominate him and 60 percent to nominate somebody else.“

Do you think Democrats are losing faith in their impeachment gamble?

As if to underline the point of how utterly routine the development was, Politico headlined the piece: “Jerry Nadler unfazed by Jeff Van Drew’s defection.’

Chairman Nadler might well be unfazed, but there’s no doubt he and other Democrats would greatly prefer the story of party defections to be heading the other way.

Imagine the headlines, the rapturous clamor, that would greet a Republican congressman abandoning Trump for his political foes in the face of the impeachment battle. (Michigan’s Rep. Justin Amash is probably kicking himself for leaving the party in July instead of waiting for a more momentous moment.)

Van Drew hadn’t made the switch official as of Monday mid-afternoon, but the liberal agenda was clearly set:

The emphasis in the story was not to be Van Drew’s actual decision, or the reasons behind it — or the unconscionable positions the Democratic Party has taken since the “whisteblower’s” story of Trump’s phone call to Ukrained President Volodymyr Zelensky kicked off this embarrassing episode in American history.

It’s going to be the reaction, in particular how real, anti-Trump Democrats were dealing with the news.

The New York Times, for instance, contributed what amounted to a long, anti-Van Drew screed, quoting numerous Democrats who didn’t like the decision. It was headlined ,“7 Aides Resign Over Rep. Van Drew’s Plan to Switch to Republican Party,” as though the decision of seven Democrat office workers was the most important element to the rest of America (or even to The Times readers).

By contrast, Cillizza’s take at the anti-Trump CNN was an unwonted moment of clarity.

“Hmm. Not sure, when Pelosi began this partisan show trial, that she envisioned it being so bad that it would drive House Dems—from New Jersey, no less—to switch parties,” Cruz wrote.

Hmm. Not sure, when Pelosi began this partisan show trial, that she envisioned it being so bad that it would drive House Dems—from New Jersey, no less—to switch parties. https://t.co/3tDxYBSZMy

.@CongressmanJVD has seen the forest through the trees throughout this ridiculous impeachment sham. 💪🇺🇸 pic.twitter.com/DKNKYRhztX

And Trump, who met with Van Drew in the White House on Friday, according to The Hill, tweeted his own encouragement.

Wow, that would be big. Always heard Jeff is very smart! https://t.co/7yDPU4N3wd

Now, obviously Van Drew is just one congressman in a House of Representatives dominated by Democrats. But his reported plans to depart the party for Republicans is hurting Democrats out of proportion to one South Jersey congressional seat.

It’s giving the lie to Democrat efforts to portray impeachment as a unifying issue, and it’s forcing the party to play defense – coming up with rationales for why a freshman lawmaker would leave instead of keeping on the attack against Trump.

And it comes at a time when the broader context of events is clearly in Trump’s favor as the impeachment issue is about to go to the Republican-controlled Senate.

“For the first time in months, those opposing impeachment and removal now slightly edge out those in support those moves, according to Real Clear Politics polling average. That average includes two national polls released Monday that show more people oppose impeachment/removal than support it,” Cillizza wrote.

“The numbers can, of course, change. The House hasn’t even impeached Trump yet — that will come, if all goes to plan, on Wednesday — and the Senate trial won’t begin until the new year. Those twin events will attract massive amounts of press coverage and, anytime there’s that much attention, the possibility always exists that minds can and do change.

“But don’t underestimate what the Van Drew party switch means for Trump. It gives him a cudgel to beat Democrats with — and, if the early returns are indicative, he and his allies will do just that over the coming days, weeks and maybe even years. In short: Christmas came early for Trump.”

Democrats like Nadler, and his media allies like the New York Times, can try everything they can think of to change that perception, but the American people know what they’re seeing.

And when it comes to Jerry Nadler & Co., they don’t like it.