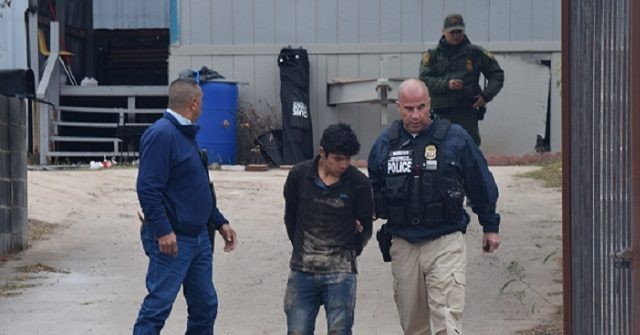 What had only moments earlier been a quiet neighborhood became a scene of chaos as Laredo Sector Border Patrol agents and a U.S. Customs and Border Protection (CBP) Air and Marine Operations (AMO) helicopter aircrew leaped into action following the illegal crossing of a few migrants. Agents captured at least one in the presence of the Breitbart News team while the complex Los Zetas-connected smuggling operation unfolded.

Shortly after Breitbart News stopped at a well-known river crossing area in Rio Bravo, a monitoring Border Patrol agent quickly drove off in response to illegal activity. As the Breitbart crew followed, multiple Border Patrol vehicles responded and the AMO helicopter quickly appeared overhead to provide air cover and communications to the ground-based agents. Breitbart News witnessed the initial runner who led agents on a foot pursuit through the neighborhood.

“This is territory that is controlled by Los Zetas,” Breitbart Border and Cartel Chronicles Projects Director Brandon Darby explained. “This is a neighborhood that is a heavy smuggling neighborhood for Los Zetas.”

“We saw Border Patrol looking for someone, and there are multiple things going on,” Darby said describing the chaos that quickly erupted in the neighborhood. “What’s going on is they use one person to come in and run to distract the authorities while they are doing something else.”

During an April 2015 interview with Darby, Border Patrol Agent Hector Garza, speaking in his role as the then-president of the National Border Patrol Council Local 2455, confirmed that the areas directly across the river from Laredo and its surrounding communities are controlled by the Los Zetas Cartel.

A Breitbart News videographer captured the moment when Border Patrol agents and a Homeland Security Investigations special agent took one of the runners into custody. The situation became tense while processing the captured illegal alien as what appeared to be a scout vehicle pulled up directly behind the Border Patrol vehicle to document the situation.

“Some people are driving by and waving and acting nice,” Marlow explained. “Others are driving by and making very aggressive gestures.” He and Darby noted that many of the same vehicles drove by repeatedly. “We’re seeing a lot of action on these streets, where we had been driving all morning and there had been very little action … almost no pedestrians, almost no automobile traffic. Then, all of a sudden, this is the most happening neighborhood in town.”

Darby explained that the cartel smugglers set up complex operations like this where they run a few people across the border to tie up and distract Border Patrol resources. He explained the decoys provide cover for “a drug load or maybe they’re trying to cross a load of people who have given them money — who have given them a significant amount of money or agreed to pay a significant amount of money.”

“So they send one of their own, one of the neighborhood guys who can run fast,” Darby continued. “They send him across and get Border Patrol to look somewhere else, and they can get their load across.”

Bob Price serves as associate editor and senior political news contributor for the Breitbart Border team. He is an original member of the Breitbart Texas team. Follow him on Twitter @BobPriceBBTX and Facebook.