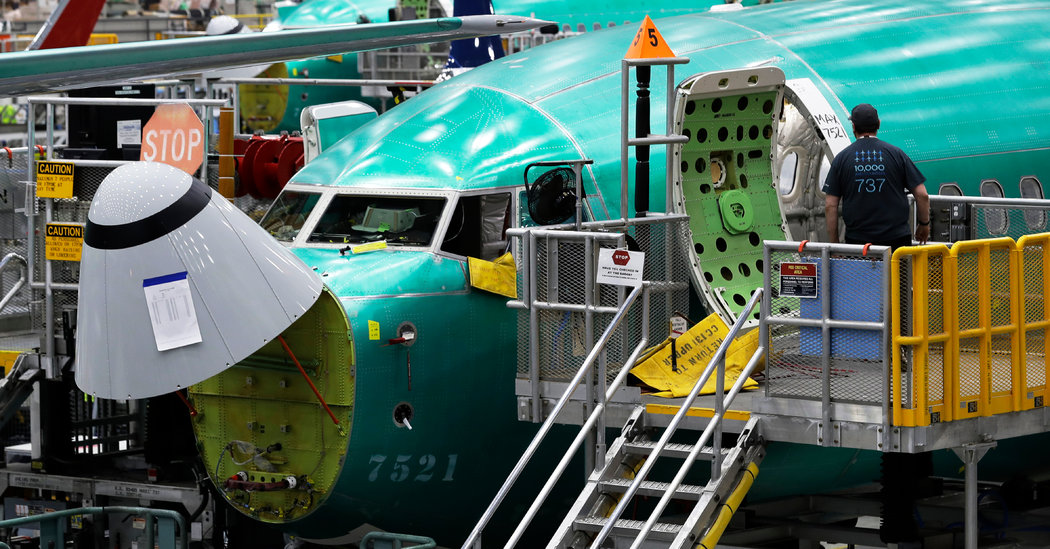 Boeing said on Monday that it would stop making the 737 Max in January as it continues to grapple with fallout from two crashes that killed 346 people.

Boeing’s decision to temporarily halt production is likely to send shocks through the American economy. It will affect suppliers around the country and plunge the company deeper into crisis.

The 737 Max, which is produced in Boeing’s factory in Renton, Wash., is the company’s most important aircraft, representing tens of billions of dollars in annual sales. It has been grounded for nine months, since shortly after the second accident.

With the company still unable to win approval from global regulators to let the plane fly again, executives and board members have made, in halting production, one of the most consequential decisions in the manufacturer’s more than 100-year history.

“This decision is driven by a number of factors, including the extension of certification into 2020, the uncertainty about the timing and conditions of return to service and global training approvals, and the importance of ensuring that we can prioritize the delivery of stored aircraft,” the company said in a statement. “We will continue to assess our progress towards return to service milestones and make determinations about resuming production and deliveries accordingly.”

Boeing said it intended to redeploy the workers building the Max to other projects, avoiding layoffs or furloughs for the time being.

Boeing is America’s largest manufacturing exporter and the largest component of the Dow Jones industrial average. It will try to manage the disruption to suppliers, though it did not give details. It may continue to accept parts from major suppliers, so that when the company restarts the Max line, those contractors are able to quickly ramp up production. Others are likely to endure significant financial pain if Boeing’s shutdown halts part of their assembly line for a period of months.

“Our objective continues to be ensuring supply chain health and production system stability, including the preparedness for seamless transition in the future,” a Boeing spokesman, Gordon Johndroe, said in a statement.

Shares of Spirit AeroSystems, which makes the fuselage of the Max, fell nearly 2 percent on Monday. Boeing’s shares were down more than 4 percent.

“It will have enormous ripple effects,” said Susan Houseman, director of research for the Upjohn Institute for Employment Research. “It will have very real effects on many people’s lives, and it’s never good for this to happen right before the holidays.”

But because Boeing is not planning significant layoffs and its suppliers are distributed around the country, Ms. Houseman said the overall effect on the broader economy would most likely be muted for now.

Boeing had already reduced production at the factory after the crashes, which killed 346 people. In April, the company said it would reduce the number of 737 planes it produced each month to 42 from 52. It was not clear how long the Max factory will be shut down. The decision as to when production would resume will be based on the decision by regulators to let the Max return to service.

The decision to halt production was first reported by The Wall Street Journal.

More than nine months after the Max was grounded, Boeing continues to encounter hurdles with the Federal Aviation Administration and other global regulators as it works to return the plane to service. The delays have varied from the technical to the procedural, and have now made it likely that the Max will be grounded for a full year, if not longer.

As a result, Boeing has repeatedly pushed back the projected date of a return to service for the Max. Dennis A. Muilenburg, Boeing’s chief executive, said in October that he expected the planes to be approved this year. But last week, Stephen Dickson, the administrator of the Federal Aviation Administration, said the Max would not fly until 2020.

Southwest Airlines and United Airlines have postponed Max flights until March, while American Airlines has said it won’t fly the Max until April.

Shutting down the line rather than further reducing the rate of production could help the company. Boeing has built nearly 400 Max jets that it has not yet delivered. The process of delivering all those jets will take at least a year, and reducing the backlog would simplify that process. It would also reduce the time the newly built planes sit idle.

But the complex task of delivering its growing backlog was made more complicated last month, when the F.A.A. took control of issuing certificates of airworthiness for each airplane. That decision means Boeing won’t be able to deliver planes as quickly as it had hoped.

The decision was “an extremely difficult choice,” said Richard Aboulafia, vice president for analysis at Teal Group. “They are burning through a lot of cash by continuing production at 42 per month, but if they don’t maintain this rate it will be harder to recover and increase production.”

Boeing first suggested it might halt production of the Max in July. The company has already announced more than $8 billion in charges related to the crisis, a figure that is expected to rise significantly. Last week, Boeing reached a partial settlement with Southwest Airlines to compensate it for some of the costs it has incurred as a result of the protracted grounding of the Max.

“Boeing still has credit lines and probably the ability to incur new debt,” said Scott Hamilton, managing director of the Leeham Company, an aviation consultancy. “Even so, at some point, Boeing — even with its financial resources — has to stop the cash bleeding.”