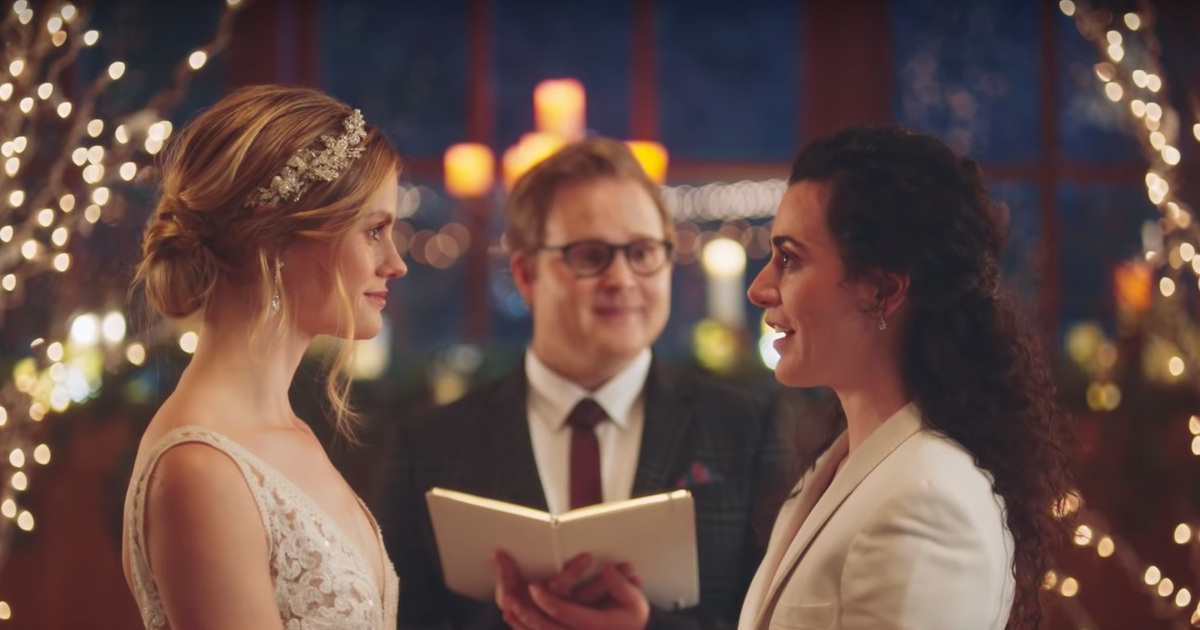 Earlier this week, the Hallmark Channel pulled four ads for wedding website Zola because they featured a same-sex couple, bending to pressure from conservative group One Million Moms. Now it seems Hallmark is bending back the other way, pledging to reinstate the blushing brides after widespread backlash.

A Hallmark Channel spokesperson initially told the New York Times the ads’ removal was due to a company policy “not to air overt public displays of affection in our sponsored advertisement, regardless of the participants.”

However, Zola disputed this claim.

The hashtag #BoycottHallmarkChannel quickly spreading on Twitter in the wake of Hallmark’s decision to pull the ads, as celebrities such as Ellen DeGeneres, Monica Lewinsky, and Bridget Regan drew attention to the issue. Zola also pulled all their advertising from Hallmark.

“All kisses, couples and marriages are equal celebrations of love and we will no longer be advertising on Hallmark,” said Chi.

TRY THIS @hallmarkchannel :
We apologize to the LGBTQ community + your allies. We used an outdated mode of decision making. It was wrong. We’re sorry.
We’re taking steps to make sure this never happens again.
We’re now running the ad in all of our programming every comm break.

Hey @hallmarkchannel, this is incrediblly disappointing and disheartening. I thought #Hallmark was all about spreading love -especially this time of year. Instead you are endorsing discrimination. It’s time to give respect to LGBTQ families and communities. 🏳️‍🌈 https://t.co/l2cfh2pskb

Now, Hallmark has said it will reinstate the pulled ads, giving viewers back their lesbians this Christmas.

“The Crown Media team has been agonizing over this decision as we’ve seen the hurt it has unintentionally caused,” Hallmark Cards president and CEO Mike Perry said in a statement. “Said simply, they believe this was the wrong decision.”

“We are truly sorry for the hurt and disappointment this has caused … Across our brand, we will continue to look for ways to be more inclusive and celebrate our differences.”

The company’s films aren’t exactly known for their diversity, with this incident only serving to highlight this fact. Nevertheless, Hallmark claims it “is, and always has been, committed to diversity and inclusion — both in our workplace as well as the products and experiences we create.”

“It is never Hallmark’s intention to be divisive or generate controversy,” said a statement released by the company. “We are an inclusive company and have a track record to prove it.” Oddly in light of what kicked off this furore, Hallmark backed its claims by saying it “feature[s] LGBTQ couples in commercials.”

Hallmark has been making noises about increasing diversity for years, but has struggled to follow through. In November, the Hollywood Reporter found only four of Hallmark’s 24 original holiday movies this year feature black leads, down from five out of 21 last year. None feature LGBTQ characters.

Now that the company is seeing real financial consequences of their glacial pace at which they’re changing, there’s much more incentive for them to finally start walking the walk.

“The Hallmark Channel will be reaching out to Zola to reestablish our partnership and reinstate the commercials,” Hallmark said.