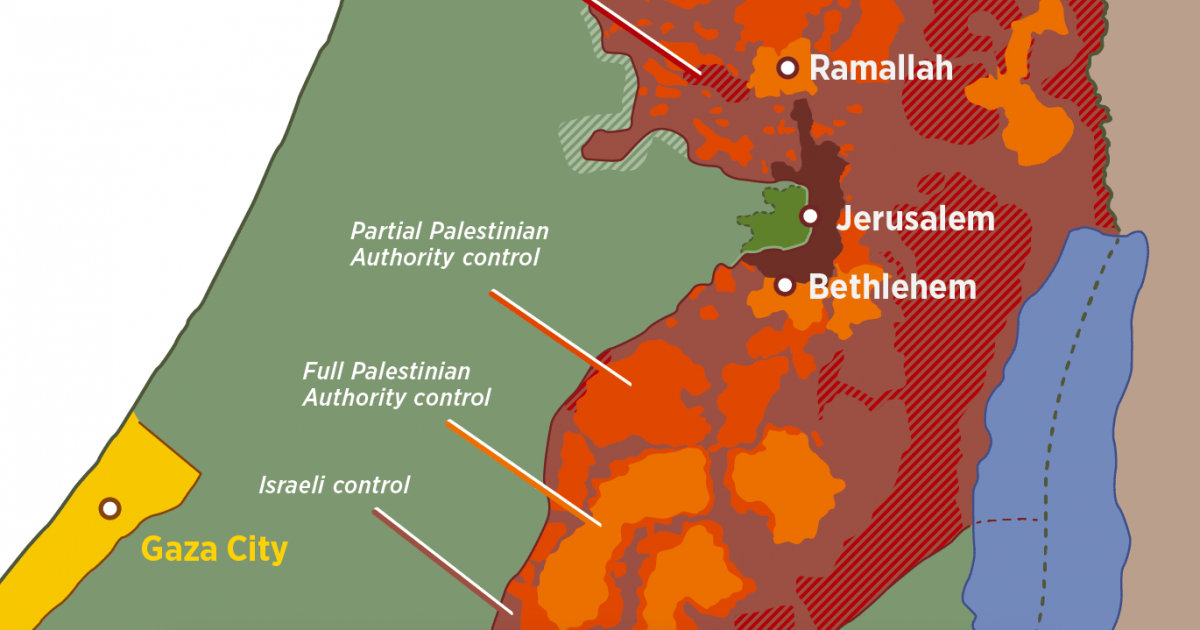 Leah and George—not their real names—have lived in the Palestinian West Bank since 2016. For the first seven days, they were allowed to be there. For the last three years, nine months, and counting, they’ve been considered illegal aliens.

The couple is from the other Palestinian territory, the Gaza Strip—a narrow piece of land sandwiched between Israel, the Mediterranean, and Egypt’s Sinai Peninsula. As Greek Orthodox Christians, they were always part of a tiny religious minority in a place that’s more than 99 percent Muslim. But their lives had grown less and less stable in the decade after Hamas stormed to power in Gaza in June 2007.

Tragedy visited the family almost immediately after the takeover. On October 6, 2007, Leah’s brother Rami—31 years old and the manager of a Protestant Christian bookshop—was abducted by Islamic fundamentalists, stabbed and shot to death, and left out in the street.

Their lives grew more difficult as the economic situation in the Strip deteriorated. Since an official goal of Hamas was to “obliterate” its Jewish neighbor, Israel responded to the change in government by launching a blockade against Gaza. As a result, nearly 2 million people today are trapped there under conditions of desperate scarcity.

The Israeli government strictly controls all border crossings, but Gazan Christians can apply for temporary visas to visit nearby holy sites, such as the Church of the Nativity and the Church of the Holy Sepulchre, around the holidays. Leah and George took advantage of such a pass. Leaving their house, their cars, their jobs, and virtually everything else behind, the couple and their four children traveled to the city of Ramallah and started over from scratch.

“Hamas hasn’t left anything good in that place,” says George. “So we took the cross and placed our lives in God’s hands.”

Now that the family is in the West Bank, they no longer have the day-to-day worries of life under siege. But stability remains elusive. As another Christmas approaches—their fourth away from home—they remain separated from relatives in Gaza, including George’s mother and three siblings. And anytime they venture outside the city of Ramallah, they’re taking a risk: The Israel Defense Forces (IDF) man security checkpoints throughout the territory; if you’re stopped and your ID shows a Gaza address, you can be sent back.

Leah’s sister-in-law—Rami’s widow—lives in Bethlehem, an hour and 15 minutes away. Leah describes praying Hail Marys and Our Fathers the whole way to visit her. Like the sword of Damocles, the possibility of deportation hangs above them all the time.

‘I Was Sick of Gaza’

The best-case scenario for people like Leah and George would be for Israel’s Coordinator of Government Activities in the Territories (COGAT) to formally change their address in the Palestinian population registry from Gaza to the West Bank. But since the outbreak of the second intifada two decades ago, the Israelis have refused virtually all requests to reregister Gazans in this way.

The second-best option is to get a “permit to remain” from COGAT. This permission, which is infrequently granted to begin with, must be renewed every few years, a process human rights groups have described as anything but pro forma. But for those who receive one, it’s a temporary reprieve from the threat of being sent back.

Khalil Sayegh is one of the lucky few. At 24, the Gaza-born Christian has been in the West Bank for 10 years. The first eight of those he spent in fear. But in 2017, he was hired as a fellow by the Philos Project, an American nonprofit that promotes “positive Christian engagement in the Middle East.” The group was able to get him a permit to remain, although it’s set to expire in February.

I met Sayegh in September, on a Philos-sponsored trip to the Holy Land. His own story is just as ripped-from-the-movies as Leah and George’s. “I was sick of Gaza—sick of persecution, sick of discrimination, also sick of war and the siege by Israel,” he says. So he fled to the West Bank at age 14, against his parents’ wishes. “They didn’t like it, but I had to do it. Because for the last year at school, I used to face people systematically trying to convert me to Islam, including my own teachers. And I always rejected it, so they really gave me a hard time.”

In Ramallah, Sayegh worked full-time, studied full-time, and crossed his fingers that he wouldn’t be caught. The circumstances weren’t ideal, but like illegal immigrants around the world, he found them preferable to what he had escaped.

Since getting his permit to remain, Sayegh has been able to travel safely within the West Bank. He’s not sure what will happen when it expires in a couple of months, but temporary status is better than nothing. Now he’s trying to help other Gazan Christians, including Leah and George, get legalized as well.

“It would definitely make things easier,” Leah says. In addition to her sister-in-law in Bethlehem, the family has relatives in the Israeli city of Nazareth. “We can’t go to visit them, or we go in secrecy and take a risk.” George usually stays behind on such excursions—he’s more likely to attract the attention of the IDF than is his wife. “If we had [West Bank] ID cards,” she says, “we could go and not be afraid.”

In October 2009, Berlanty Azzam was two months away from completing a four-year business degree from Bethlehem University. The Gaza-born Christian was on her way back from Ramallah when the IDF picked her up. According to Gisha, an Israeli human rights group, “Berlanty was handcuffed, blindfolded, and removed to the Gaza Strip on that same day.”

Israel’s High Court of Justice later upheld the removal. Although it did not claim the student was a security threat, it found that she lacked the proper paperwork to be in the West Bank. Azzam said she had asked COGAT to change her address to Bethlehem but was repeatedly denied.

This is the nightmare scenario for people like Leah and George.

Freedom House classifies both Palestinian territories as “not free.” But while the West Bank scored just 25 out of 100 on the group’s 2019 “Freedom in the World” index, Gaza clocked in at an appalling 11. Locals describe the Strip as an open-air prison. The United Nations warned in May that the Israeli blockade had put it on the verge of a humanitarian catastrophe.

Hamas, which the U.S. government has designated a terrorist organization, officially recognizes freedom of worship. But as Sayegh points out, “when you have an Islamist government in power, the jihadists, those who are even more radical than Hamas, are empowered.” Last winter, a different militant group distributed flyers warning Gazans that celebrating Christmas was forbidden. Whispered stories of kidnappings, forced conversions, and other forms of religious persecution abound. The extent of the problem is impossible to verify, but one thing is certain: The Christian population is dwindling. Just 50 miles from the place where Jesus was crucified, fewer than 1,100 of his followers remain.

For Leah and George, of course, the physical peril of life in Gaza feels more than hypothetical. Leah becomes emotional while describing what the family has been through, beginning with the loss of her brother. “Our children have a lot of sorrow,” she says, wiping away a tear. “Terrible things have happened to us, but I thank God. It could have been worse.”

‘It Should Be Seamless’

Despite objections from humanitarian groups, Israel has stopped Gazans from formally becoming West Bank residents since 2000 and has stopped them from leaving the Strip at all, with a handful of exceptions, since 2007.

One of the loopholes has long been travel to the holy sites for Christmas and Easter. But in the last year, due to “heightened security tensions,” those holiday passes have become harder to obtain. In April, Israel announced that just 200 Christians, all over the age of 55, would be permitted to leave the territory for Easter, and only for travel abroad—to Jordan or Egypt, for instance, but not to Bethlehem (where Jesus was born) or Nazareth (where he spent most of his life). After an outcry, the government reversed itself, adding another 300 visas for the West Bank and Jerusalem.

Leah and George have been praying their remaining relatives will be allowed to come to them in Ramallah in time for the holidays, and Sayegh has been petitioning the government to make that happen. But a successful reunion would amount to a Christmas miracle. Last week, COGAT announced that it would allow a total of 500 Gazans to travel to the West Bank and Jerusalem this winter—but the group Gisha has found that applicants are being denied permits if they have family members who left on a temporary visa and then failed to come back. This means Leah and George’s loved ones may face worse prospects for getting out thanks to the couple’s earlier decision to flee. (COGAT did not respond to requests for comment for this story.)

All this is a source of frustration for people on both sides of the geographic divide. “Under international law, Gaza and the West Bank are a single territorial entity,” says Omar Shakir, Human Rights Watch’s Israel and Palestine director. “So under human rights law, Palestinians should be able to move between Gaza City and Ramallah the same way you might move between, I don’t know, Tennessee and Georgia. It should be seamless. Israel has no right to restrict it.”

The problem is that, from the Israelis’ perspective, the threat of violence emanating from the Strip is not just hypothetical either. “In the face of the Jewish occupation of Palestine,” Hamas’ official charter reads, “it is necessary to raise the banner of jihad.” A September poll from the Palestinian Center for Policy and Survey Research found that more than half of Gazans view armed resistance as the best response to their situation. With bombings, stabbings, abductions, and other terroristic actions fresh in its memory, and with persecution deeply embedded in its history, the Jewish nation’s impulse to lock down the source of the danger is understandable. But as with all border enforcement, it comes at a human cost—especially this time of year.

“I believe that there is a true element to the security threat,” says Sayegh. “As a Palestinian Christian, even I am worried about Gaza being completely open to the West Bank, because I know how many terrorists there are.

“But there must be a way through which Israel can identify who is dangerous and who is not,” he continues. “This is collective punishment.”