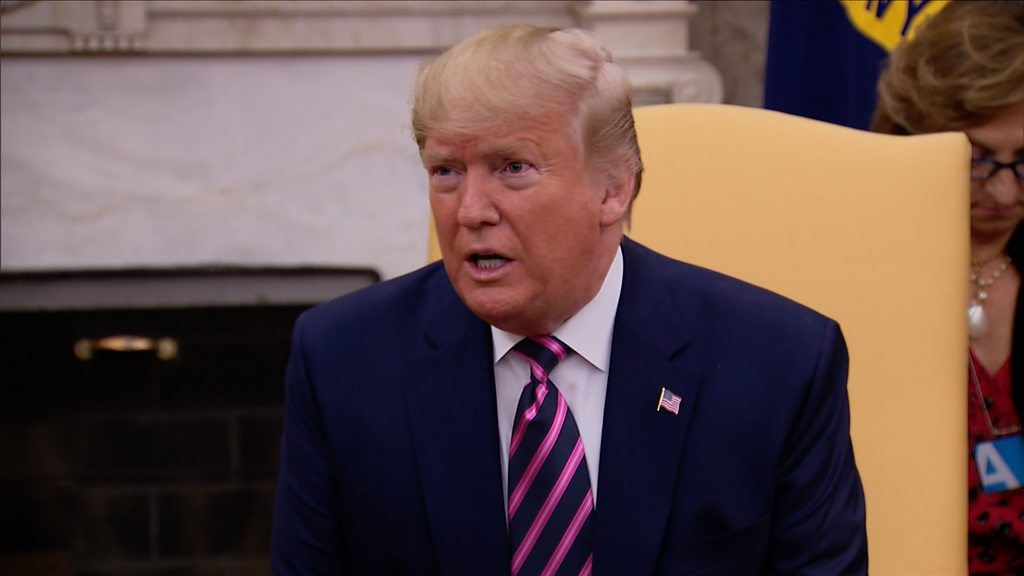 Top Democrats have urged Republicans to cross party lines and side with them in impeaching their own leader, US President Donald Trump.

Adam Schiff and Jerry Nadler, who are leading the Democratic push to impeach him, made their case days before the first full House vote.

Democrats control the House but are almost certain to lose in the Senate, which is in Republican hands.

Until now the Democrats have enjoyed a 36-seat lead over Republicans in the House but one of their representatives, Jeff Van Drew, opposes impeachment and is expected to switch parties soon.

Mr Van Drew met President Trump on Friday and has been praised by the president for his stance.

The case brought in the House accuses Mr Trump of soliciting a foreign country to help him politically, by trying to force Ukraine to launch a corruption investigation into his Democratic rival Joe Biden.

He is also accused of obstructing Congress by failing to co-operate with the House investigation.

Mr Trump denies wrongdoing. He has called the House investigation a “witch hunt” and predicted it will even benefit him in next year’s presidential election.

How did the Democrats make their pitch?

Mr Schiff, who chairs the House Intelligence Committee, said Mr Trump’s alleged misconduct had not stopped because he was still urging Ukraine and China to investigate Mr Biden and his son Hunter.

“It’s a clear and present danger, I think, to our democracy and not something that we can turn away from simply because the Republicans in the House refuse to do their duty,” Mr Schiff told ABC’s This Week.

“I don’t think any of us have any question that had Barack Obama engaged in the activity… every one of these Republicans would be voting to impeach him,” he said.

“I hope to hell… if it were Barack Obama, I would vote to impeach him.”

Mr Nadler, who chairs the House Judiciary Committee, told ABC there was a “continuing threat to the integrity” of US elections.

The march toward impeachment in the House of Representatives has hit the mark reached by Richard Nixon in 1974. Hearings have been conducted, speeches given and articles of impeachment approved by the Judiciary Committee.

All that stands between Trump and a Senate trial are two votes by the full House of Representatives – one vote on each article of impeachment.

Nixon, of course, avoided the near certainty of impeachment and Senate removal by resigning. This time around, the president and his supporters are digging in for a protracted fight.

The coming showdown in the House is destined to be a partisan affair – as everything, these days, seems to be. Republicans, their ranks thinned by electoral defeat, will remain united. While some Democrats may waver, it won’t be enough to stop the seemingly inevitable.

Democrats will frame this as a sad, but necessary, step to contain a rogue president. Mr Trump will suggest it is the latest effort by the powers of the status quo to block his populist groundswell.

As the calendar flips to 2020 and a November general election, the day approaches when American voters can directly render their verdict – on the Trump presidency and the Democrats who have sought to end it.

It is expected that the two impeachment charges will be put to separate votes in the House next week and that they will pass because of the size of the Democratic majority.

The Senate is expected to hold a trial next month on the charges. A Senate vote requires a two-thirds majority to convict the president – and, given that Republicans hold sway in that chamber, Mr Trump is expected to be acquitted instead. Republicans also appear to favour a quick vote, limiting political fanfare.

Mr Trump has indicated he would like to see witnesses called such as Joe Biden and his son.

On Thursday, Senate Majority Leader Mitch McConnell told Fox News that there was “zero chance” that Mr Trump would be removed from office by Senate lawmakers.

He added that Republican senators would be working very closely with White House lawyers to plot a legal strategy.

“Everything I do during this, I’m co-ordinating with the White House counsel,” he said. “There will be no difference between the president’s position and our position as to how to handle this.”