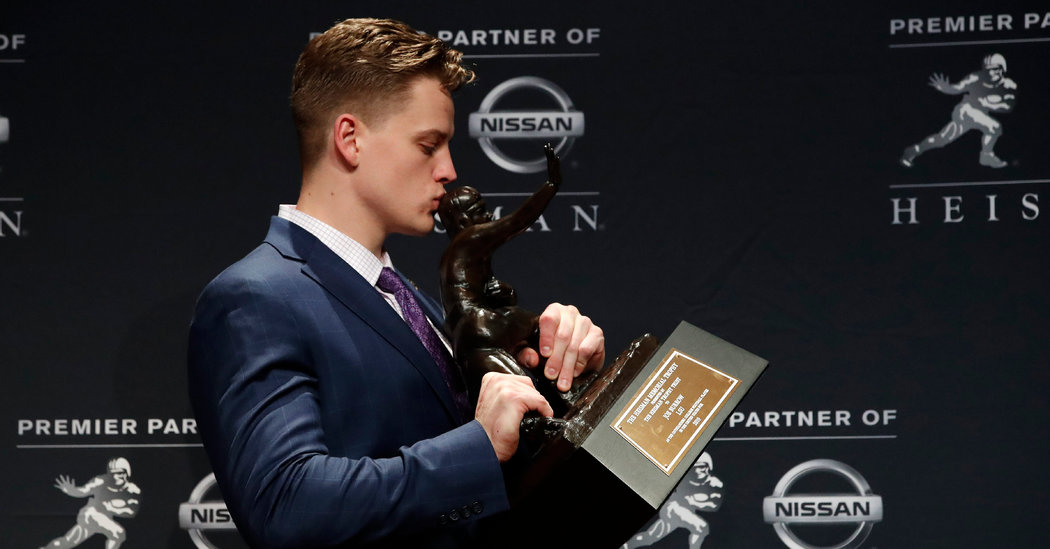 If the three quarterbacks who arrived in New York as finalists for the Heisman Trophy — Jalen Hurts of Oklahoma, Justin Fields of Ohio State and Joe Burrow of Louisiana State — harbored this dream when they set off for college, the reality came in a different hue.

Hurts figured he would be representing Alabama, Fields envisioned coming from Georgia, and Burrow pictured arriving from Ohio State.

What Saturday night’s ceremony — which included Ohio State defensive end Chase Young — also did is further stamp the influence of the transfer quarterback in college football.

Burrow, who won the award in a record-breaking landslide, is the third consecutive transfer quarterback to win the Heisman Trophy, following Oklahoma quarterbacks Baker Mayfield, who began his career at Texas Tech, and Kyler Murray, who started at Texas A&M.

Until 2017, only one other transfer quarterback had won the Heisman: Cam Newton of Auburn in 2010.

Newton, who left Florida rather than sit behind Tim Tebow, and the others have made clear that the bromide about sticking it out and waiting your turn is not — and should not be — for everyone.

“You know if you just go to the right place with the right fit what you can do on the field with that,” said Fields, a sophomore who left Georgia after last season, when he could not beat out Jake Fromm.

Still, as impactful as Hurts and Fields were in their first seasons at their new schools — and as dynamic as Young was, leading the nation with 16½ sacks — Burrow was an overwhelming favorite. He broke the record for the largest margin of victory, which was set by O.J. Simpson in 1968, and was voted first on 90.7 percent of all ballots, besting the previous record of 86.7 percent set by Troy Smith in 2006. Burrow is the second L.S.U. player to win the award, joining Billy Cannon, who won in 1959.

When his name was announced as the winner, Burrow, dressed in a purple suit and wearing yellow SpongeBob SquarePants socks, shook hands with Hurts, Fields and Young, who finished second, third and fourth, and climbed to the stage where a podium surrounded by a number of past winners awaited.

As he began to speak, Burrow lost control for perhaps the first time all season.

“The first thing I want to say,” Burrow began before he paused to fight back tears.

Burrow reflected on his journey from Athens, Ohio, which sits on the edge of Appalachia and is beset by poverty. “I’m up here for all those kids in Athens County who go home without a lot of food on the table,” he said.

He grew emotional again thanking his coach, Ed Orgeron, for “taking a chance on me not knowing if I could play or not,” after three seasons of sitting on the bench at Ohio State. He drew laughter from the crowd, which included 59 friends, family and L.S.U. people, when he suggested that Orgeron get a lifetime contract.

“That’s the most I’ve cried in 23 years of living,” Burrow said later. “When I got up there, all the names of people that helped me get here from when I was 5 years old to this year at L.S.U. — they came running through my mind. That’s why I got so overwhelmed.”

He has yet to be so flustered on the field this season.

Burrow passed for 4,715 yards, second in the nation; completed 77.9 percent of his passes, which would be a N.C.A.A. record; and threw a Southeastern Conference-record 48 touchdown passes against six interceptions. And he did so for the unbeaten Tigers, who are ranked No. 1 in the nation and are 13-point favorites against Oklahoma in a College Football Playoff semifinal.

But it was hard to see this coming. Burrow had left Ohio State as a graduate transfer after the 2017 season, when he saw his hopes of beating out Dwayne Haskins as the starter come to an end. And his first season at L.S.U. was very good, as he led the Tigers to a 10-3 record.

This season, though, he has been a revelation.

Being surrounded for a second season by an elite receiving corps, which included the Biletnikoff Award winner Ja’Marr Chase and a darting, determined running back in Clyde Edwards-Helaire, made a significant difference.

As gaudy as Burrow’s numbers are, his case was buttressed by his role in L.S.U.’s offensive renaissance. For much of the last 20 seasons, the Tigers’ place as national championship contenders — they shared the 2003 title with Southern California and won it outright in 2007 — has been built on a fierce defense and a complementary offense that revolved around a bruising running game.

A parade of offensive coordinators with strong pedigrees — Jimbo Fisher, Cam Cameron, Gary Crowton, Steve Kragthorpe and Matt Canada among them — were supposed to bring L.S.U.’s offense out of the dark ages, but none did until this season.

Joe Brady, a 30-year-old receivers coach plucked from the New Orleans Saints staff, worked with offensive coordinator Steve Ensminger to build a scheme that allows Burrow to walk up to the line of scrimmage and, with a vast array of offensive weapons, hunt defensive formations for mismatches.

The defining moment in his campaign was a trip to Tuscaloosa on Nov. 9.

Alabama had beaten L.S.U. eight consecutive times — including last year when the Tigers were blanked 29-0 with Burrow at quarterback. This time would be different.

In front of a capacity crowd of 101,821 that included President Trump, Burrow was nearly perfect. He completed 31 of 39 passes for 393 yards and three touchdowns, along with 64 yards rushing on 14 carries — including a late third-down conversion that all but sealed a 46-41 victory.

Burrow was carried off the field on his teammates’ shoulders.

The next three weeks, the Tigers put up 58, 56 and 50 points in routs of Mississippi, Arkansas and Texas A&M — and dissected the best defense in the conference with a 37-10 victory over Georgia in the SEC championship game.

All that took any suspense out of Saturday’s ceremony, which felt like a coronation.