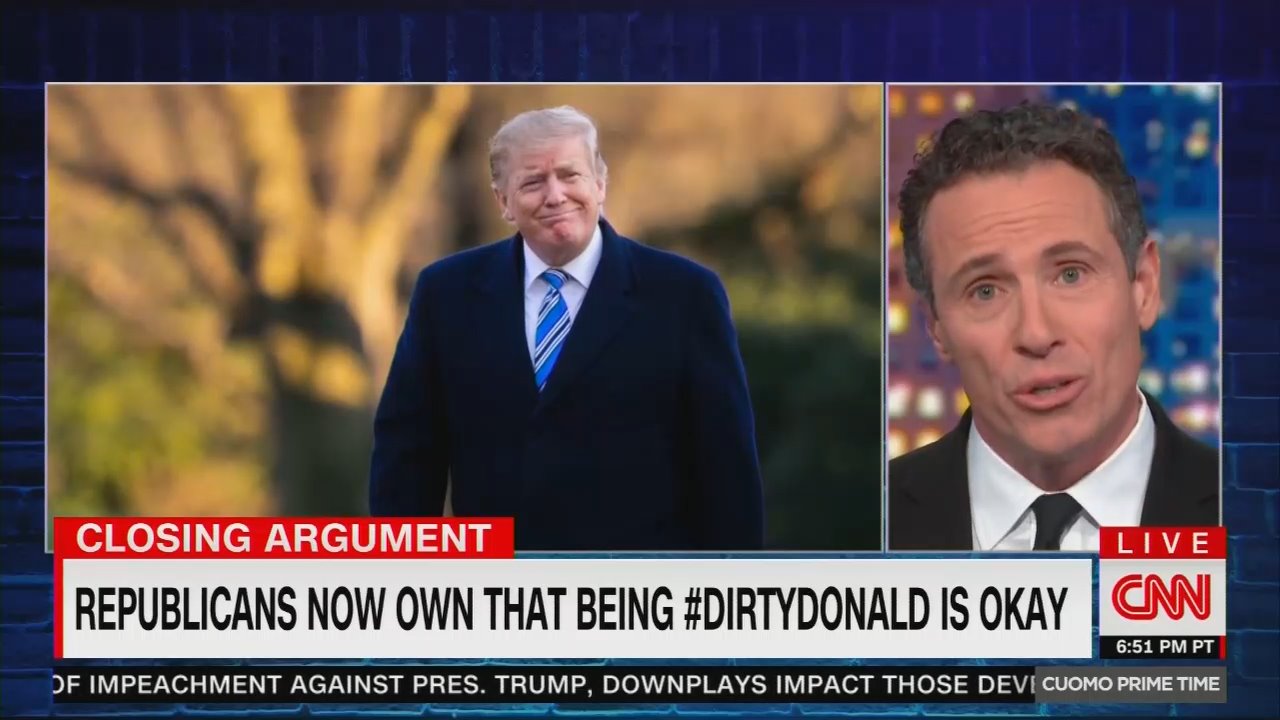 Not surprisingly, in the very first sentence of his monologue, Cuomo cheerfully announced: “If nothing changes, President Trump is on the cusp of bearing the stain of impeachment.” Cuomo’s enthusiasm for impeachment should not have come as that much of a shock since he recently exulted that Trump’s name “will be glued to being impeached for eternity” and suggested that impeachment “will be the first thing people will know about this presidency forever.”

Acting as one of the Democrats’ self-appointed impeachment coaches, Cuomo explained: “This idea that impeachment means you have to have the case closed in the House is bogus. I don’t know why Democrats didn’t make more of this point and set the standard.”

Cuomo also whined that “they waited as long as they did when they were talking about impeachable acts during Mueller,” “let the dossier author keep being maligned as anti-Trump after it came out that he’s friends with Trump’s daughter,” and expressed his bewilderment as to “why former V.P. Biden didn’t jump all over the right attacking Hunter Biden’s mental health struggles and launch a campaign of awareness to counter the stigma that they tried to weaponize.”

After recycling talking points he used earlier in the week about congressional Republicans “continuously subordinating their oath” to the Constitution by not voting in favor of impeachment, Cuomo admitted “it’s not illegal.” At this point, Cuomo unveiled a new adjective to describe the actions of Trump and Republicans that came straight out of the Twitterverse: “dirty.” According to the chyron at the bottom of the screen, “Republicans Now Own That Being #DirtyDonald is Okay.”

Cuomo listed several examples of the President’s behavior that he characterized as “maybe not illegal but just dirty,” including his “conversations with convicted felon Roger Stone about WikiLeaks, information that would hurt Hillary Clinton, asking Russia to interfere more, going after kids, playing on gender and diversity issues, ignoring congressional subpoenas, refusing to release his taxes.” When he finished his laundry list of grievances against the Commander-in-Chief, Cuomo used the hashtag “#DirtyDonald.”

In addition to repeatedly using the word “dirty” to describe Trump, Cuomo painted Senate Majority Leader Mitch McConnell as “dirty” for proclaiming that the outcome of the President’s impeachment trial in the Senate is a foregone conclusion.

A transcript of the relevant portion of Friday’s edition of Cuomo Prime Time is below. Click “expand” to read more.

CHRIS CUOMO: If nothing changes, President Trump is on the cusp of bearing the stain of impeachment. For all the feigned desperation and cries that the case is not complete by his devoted House defenders, the only bar Democrats had to meet for articles of impeachment was proof to sufficient…to justify an allegation. Let’s just be honest. That’s all it is. The President may have abused his power by leveraging Ukraine the way he did things. That’s what they say. Now, when I say it like that, doesn’t sound that conclusive, does it? That’s the point.

This idea that impeachment means you have to have the case closed in the House is bogus. I don’t know why Democrats didn’t make more of this point and set the standard. But I also don’t know why they waited as long as they did when they were talking about impeachable acts during Mueller, or why they let the dossier author keep being maligned as anti-Trump after it came out that he’s friends with Trump’s daughter, or why former VP Biden didn’t jump all over the right attacking Hunter Biden’s mental health struggles and launch a campaign of awareness to counter the stigma that they tried to weaponize.

But the bottom line is the bar is low for what amounts to an indictment in the House, and they have the proof and, more importantly, the votes. Everything that matters in terms of trials, the way you think about it, comes next. That’s the guilt phase. The job of testing what the Democrats say they found belongs to the Senate. You see there, straight party-line vote. The Senate, they, and only they, are constitutionally bestowed with the sole power to try all impeachments. Now, you’ll notice you didn’t see anything in there about the President having a role in the planning of his own trial, right, which would make sense. But once again, this President’s pull on his party seems to trump all, and the adherence to any oath doesn’t seem to matter other than the loyalty oath to him.

SEN. MITCH MCCONNELL (R-KY): Everything I do, during this, I’m coordinating with White House Counsel. There will be no difference between the President’s position and our position as to how to handle this to the extent that we can.

CUOMO: So, the guy leading the jury, and also kind of the judge, says he has the same position as the defendant? Surely, Senate Majority Leader Mitch McConnell misspoke, right? Wrong!

MCCONNELL: Exactly how we go forward, I’m going to coordinate with the President’s lawyers, so there won’t be any difference between us on how to do this.

CUOMO: That was the second time. He said it again. Anyway, to be fair, Tom Daschle, Senate Minority Leader during the Clinton impeachment, so he wasn’t in control, but he was the head, the ranking member of his party, he tells CNN he didn’t personally speak to the President during the process, but his team was in constant contact with the White House, coordinating the moving parts. Well, what’s the difference? One, he wasn’t in power of the process, right? He wasn’t in control. And the idea that “well, they all stink,” no, not here. There’s a big difference between letting the White House know what’s going on when you’re not even in control and asking the White House what should happen. That’s what Republicans are doing. And they are continuously subordinating their oath to oversee just to be loyal to this President.

Now, look, it’s not illegal. But there’s another word that keeps seeming to fit so much of what this President and his pals do. Dirty! Trump’s alleged payoffs to the porn star and the Playmate, not illegal, especially since no one seems to care about campaign finance violations; not worthy of impeachment, I don’t think, but dirty, #DirtyDonald. His conversations with now-convicted felon Roger Stone about WikiLeaks, information that would hurt Hillary Clinton, asking Russia to interfere more, going after kids, playing on gender and diversity issues, ignoring Congressional subpoenas, refusing to release his taxes, all of it, maybe not illegal, but just dirty, #DirtyDonald. And when confronted with this, Republicans seem to own that being “Dirty Donald” is okay. Here’s former A.G. Michael Mukasey.

MICHAEL MUKASEY: He is not somebody with a great deal of knowledge of or high regard for the usual procedure.

CUOMO: Are you one of the integrity mentors in my life creating a low bar for the President of the United States, where “he usually does shady things, so let’s assume that that’s just pro forma?”

MUKASEY: No. I’m not creating a low bar for the President of the United States. What I’m doing is telling you that he is here running true to form.

CUOMO: “True to form,” I argue, also means “dirty” in this case. Now, the best you’ll get from Republican-electeds, that’s not what Mukasey is, is they’ll say, “Oh, Trump has a unique way of communicating,” or if pressed, “Well, I would have said it differently.” So, the party that once argued in impeaching Bill Clinton that they needed to cleanse the office, forget about crimes, cleanse, now, “Dirty Donald in the White House, that’s okay.” Look, “the Democrats had it out for him,” they say, that “this isn’t a fair look at the facts,” they say. Then, their main man in the Senate says this.

MCCONNELL: We all know how it’s going to end. There is no chance the President’s going to be removed from Office.

CUOMO: So, he just did what you complained about them doing in the House, “Dirty,” to do what you say you’re better than. Senate Majority Leader says he’s in lockstep with the White House and that the ending is already written. Dirty! So, the Senators, like the Representatives before them, are going to have to decide. You don’t have to ignore the obvious to find arguments against removal. You can see the wrong and still do right by this President. At least that way, you’ll be able to say you took a clean look at the situation for what it obviously is, instead of just doing this job and this country dirty. That’s the argument.