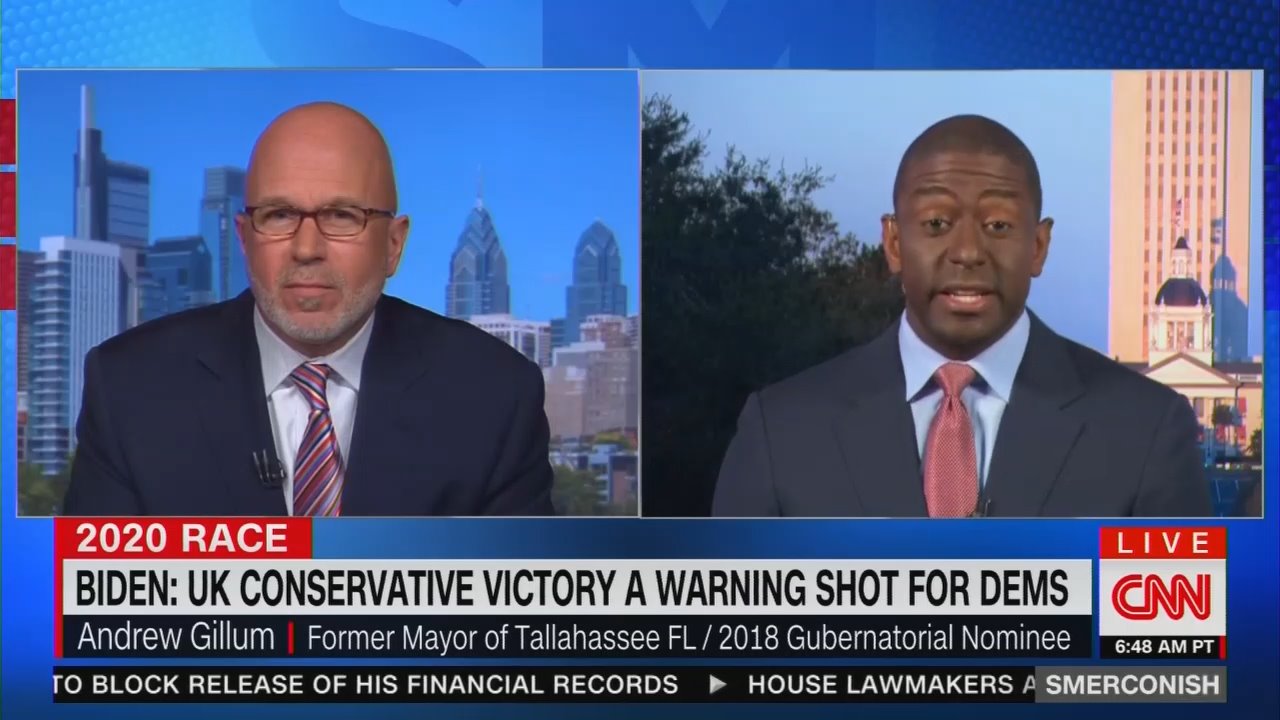 On his Saturday show, CNN host Michael Smerconish nudged CNN analyst/losing Florida gubernatorial nominee Andrew Gillum that the Conservative landslide in Britain is a warning sign for the American Democrats in 2020. Gillum threw gallons of cold water on the notion, even suggesting Trump has done nothing for red-state voters on the economy. He sold them a “bill of bads.”

Smerconish began by quoting Joe Biden urging some parallels — perhaps hinting Bernie Sanders is the American version of Jeremy Corbyn. “Look what happens when the Labour Party moves so, so far to the left,” Biden said. “You’re also going to see people saying, my God, Boris Johnson, who is kind of a physical and emotional clone of the president is able to win.”

Like a good Democrat, Gillum insisted Johnson “avoided Trump like the plague” at the NATO meeting in London earlier in the month.

SMERCONISH: Look, I’m no expert, although I do try to follow it. But I certainly remember that Brexit was June of 2016, Trump’s election was November of 2016. In retrospect, people said, man, that seems like a wake-up call of sorts. Do you think too much is being made of the application of Boris Johnson’s victory on Thursday, or I should say the Conservative Party and what it might mean for Trump?

GILLUM: Well, I mean — so let’s just put the facts in here, which are Boris Johnson avoided Trump like the plague just recently during Trump’s visit to Europe. Wouldn’t even take public pictures with him, was also seen amongst a group of foreign leaders literally laughing at the president.

Donald Trump remained for him a scourge in Britain, just as he does for about half the country here in the United States. And so, I do think we ought to be cautious as to how much we sort of compare the two of these and use this as a prelude to what would happen in November.

Another thing that I would point out is, here in the United States we know that in 2016, 4 million fewer people voted in the presidential elections. And if a Democrat is going to win, and I sure as heck hope we do, we’re going to have to do a very, very, very persuasive job at not only bringing those voters back into the fold, but ensuring that we can pull together our base.

Smerconish compared the “midlands” in the U.K. to the Midwest states of the U.S. which Trump won in 2016, “folks in formerly manufacturing meccas who are buying into the idea that it can all happen again for them.”

Gillum strangely claimed Trump “has actually exacerbated their problems and not made it easier. Those same jobs that evaded them in 2016 and in the lead-up to it still evade them today. Donald Trump sold them a bill of bads, and the Democratic nominee and the Democratic Party has to point out those differences that their lives are not better off in that instance.”