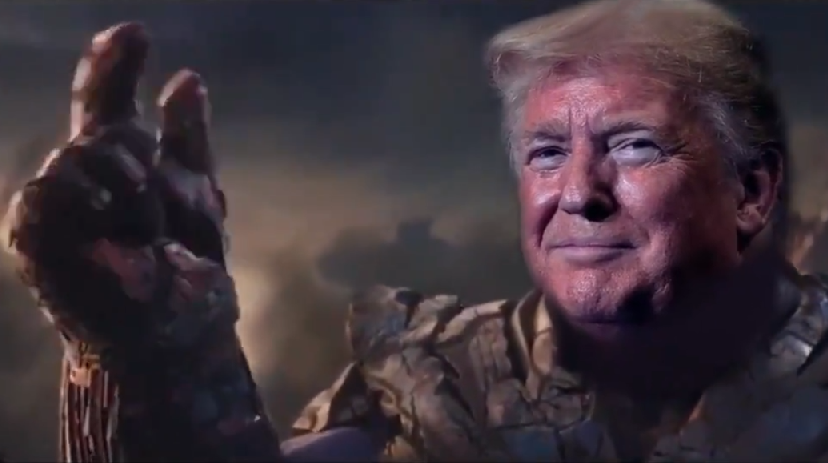 It apparently doesn’t take much to trigger CNN as far as President Donald Trump is concerned. In their latest iteration of perpetual outrage, CNN is irked over a funny meme which portrays Trump as the Marvel cartoon character of Thanos who with a snap of his finger, turns the House impeachment crew to dust.

That meme was tweeted by the Trump War Room on Tuesday.

What added the humor of the tweet was the reaction from CNN starting with Don Lemon going full Margaret Dumont over it that evening.

What are we, in junior high school? Like what the hell? What is this? Like what — what? I cannot believe that I’m even having to report this on the news. This is — this is crazy. This is literally crazy. Are you people insane? Are you insane? Go ahead, troll the Democrats on Twitter. Do this stupid, silly you know what. Play this stupid, juvenile meme game. History won’t record this meme stupid crap…

Another who feigned outrage over the Trump-Thanos theme, thus helping to popularize it even more in the public mind was Brooke Baldwin on CNN’s Newsroom who reacted with such horror that she actually asked her guest — Jim Starlin, the creator of Thanos — if he “felt violated.” What makes the interview so amusing is the utter seriousness with which they treat the subject. No smiles were cracked during the recording of this interview.

BROOKE BALDWIN: What you had written, that you felt violated?

JIM STARLIN: I probably shouldn’t use that term because that’s so much connected with the Me Too movement. I was mostly — mostly shocked and saddened. Shocked to begin with and then saddened.

BALDWIN: Tell me why?

STARLIN: I’m old enough where I remember our presidents when they spoke to the public, they did so to encourage, to inspire, to lead, not to complain like some teenage girl who’s had a bad day and that’s what I see so much going on with this particular administration. And I’m sad for my country.

BALDWIN: You point out — for people who aren’t mega Marvel fans, explain — the fact that they took Thanos of all of these characters and used Thanos in this ad, explain who Thanos is.

STARLIN: Well, in the movie, Thanos is a genocidal maniac. He wipes out half of the universe with the Infinity Gauntlet by snapping his fingers.

BALDWIN: Not exactly a superhero.

STARLIN: No, and not the kind of role model that you want to emulate. Why anyone while they’re trying to get elected would choose to take this image on, it just escapes me.

BALDWIN: Do you have any recourse? Can you have them take it down?

STARLIN: No. The First Amendment protects it under satire, if nothing else. I feel that the only thing I can do is sit there and speak out about it because as an artist, my creations, I’d like them to be used for something that has something to do with what’s going on in me, rather than somebody else to exploit. And I felt sort of obliged to speak out on this particular point.

Well, you could speak out about how it is appropriate to use a cartoon character to mock the cartoonish effort by the House to attempt impeachment based on something as ridiculous as obstruction of Congress.

Exit question: Will Trump-Thanos soon turn the CNN crew to dust? It only makes sense since he already turned their ratings to dust.