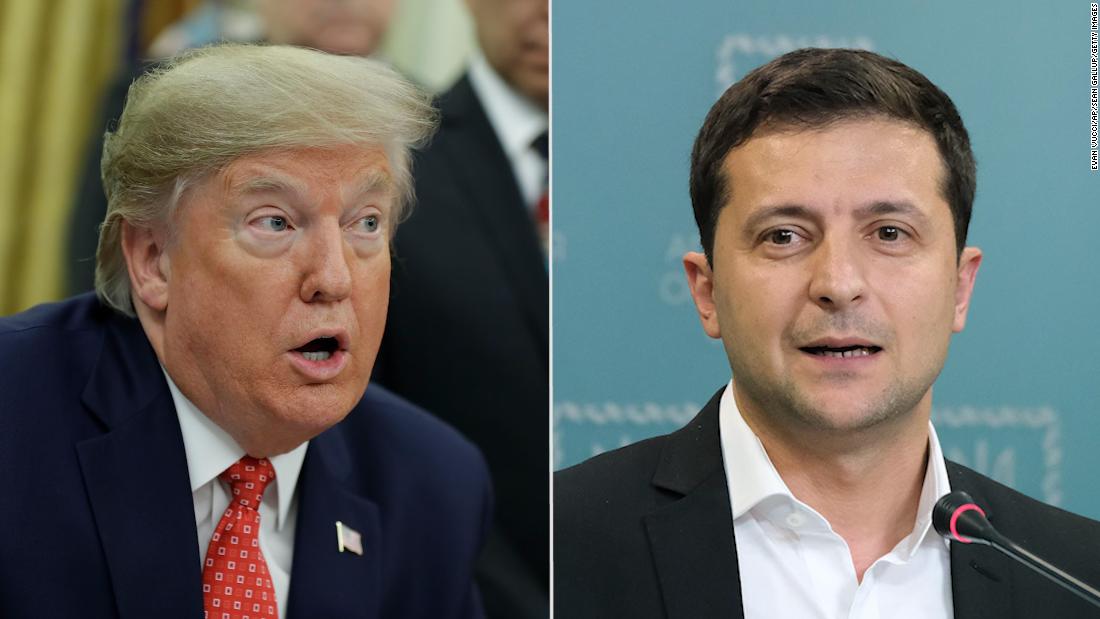 A version of this story appears in CNN’s Impeachment Watch newsletter. To get it in your inbox, sign up for free here.

“Nobody is allowed on the calls,” a White House official said, describing the new effort to limit those with access to the President’s senior-most aides. “The barn door officially closed after the horse escaped.”

On to the House — The House Judiciary Committee voted on party lines Friday morning to refer two articles of impeachment to the full House of Representatives, which is expected to vote to impeach Trump next week. The House Rules Committee will consider them Tuesday and Trump could be impeached Wednesday. Read Maeve Reston’s analysis.

Long time coming — Trump said, during an appearance next to the President of Paraguay in the Oval Office, impeachment will give him a political boost. He said the impeachment effort might have been underway even before he announced his presidential campaign in 2015.

Complete coordination — Senate Majority Leader Mitch McConnell said he was coordinating with White House attorneys on an impeachment strategy. It should not be surprising that the Republican-led Senate will work to preserve the Republican in the White House, but Democrats were arguing that McConnell should be keeping an open mind about the charges. That doesn’t seem like a realistic position.
Trump’s taxes at the Supreme Court — The court said Friday that it would hear arguments this term about subpoenas demanding Trump’s financial records. That means we’ll have a decision by June.

Senate Republicans, during their coordination with the White House, have been pushing a speedy trial. Trump has been partial to the idea of a longer trial with witnesses, to make a spectacle of his impeachment.

He may be coming around to the wisdom of McConnell and other Republicans like Sen. Lindsey Graham of South Carolina.

Trump told reporters on Friday that he was open to a short trial or a long trial and that he wouldn’t mind a longer one if it meant more witnesses. Graham, who was very involved with the Bill Clinton impeachment, can remember the testimony of Monica Lewinsky, albeit on video, at that trial.

“I don’t need any witnesses at all. I am ready to go,” Graham said this week on Fox News. “I don’t want to give it any legitimacy because it is a crock.”
Republicans been coming around to this idea for some time, as CNN’s Capitol Hill team reported earlier this week.

A long trial could backfire on Trump because it would also give Democrats a chance to relitigate their case. There’s evidence now that Republicans are circling to defend their party leader.

Manu Raju asked Rep. Debbie Lesko, an Arizona Republican, if it’s ever OK for an American president to ask a foreign power to investigate a political rival.

Raju: “He did ask Zelensky.”

You can argue that what Trump did is OK. You can argue that it’s not an impeachable offense. You can even argue, contra the evidence, that he didn’t pressure Ukrainian President Volodymyr Zelensky. If you’re going to do those things, you need to be able to explain why it’s OK.

But you cannot factually say that Trump didn’t ask Zelensky to investigate Biden. Here’s the transcript.

Something similar happened Thursday, when Rep. Doug Collins of Georgia, the top Republican on the House Judiciary Committee, found it difficult to explain why references to Joe Biden should be removed from the articles of impeachment — since, in the call, Trump mentions Biden by name.

These are symptoms of a collective case of viral amnesia that seems to be spreading around the GOP.

From Kiev to the White House, Rudy Giuliani is everywhere

The Wall Street Journal used a social media tracker to show where all Giuliani has traveled on his own behalf and Trump’s since Trump became President. It’s all over the place. Last week Giuliani was in Ukraine, still digging up dirt. He told the Journal that Trump had called him while his plane was still taxiing, asking what he’d gotten in Kiev.

Friday he was spotted at the White House.

Chris Cillizza published an interesting interview with Joe Lockhart about what it was like to live through the Clinton impeachment. It’s a good reminder that Bill Clinton, like Trump, had a lot going on while he was being impeached. Five days after the House Judiciary Committee voted to send articles of impeachment to the House floor, Clinton authorized a bombing campaign against Iraq. It culminated on December 19, 1998, the day he was impeached.

I will never ever get tired of watching these videos of lawmakers from both parties saying completely opposite things in ’98 and ’99 vs. today.

What are we doing here?

The President has invited foreign powers to interfere in the US presidential election. Democrats want to impeach him for it. It is a crossroads for the American system of government as the President tries to change what’s acceptable for US politicians. This newsletter will focus on this consequential moment in US history.

Keep track of congressional action with CNN’s Impeachment Tracker. See a timeline of events. And get your full refresher on who’s who in this drama.
Category: News
Tag: CNN