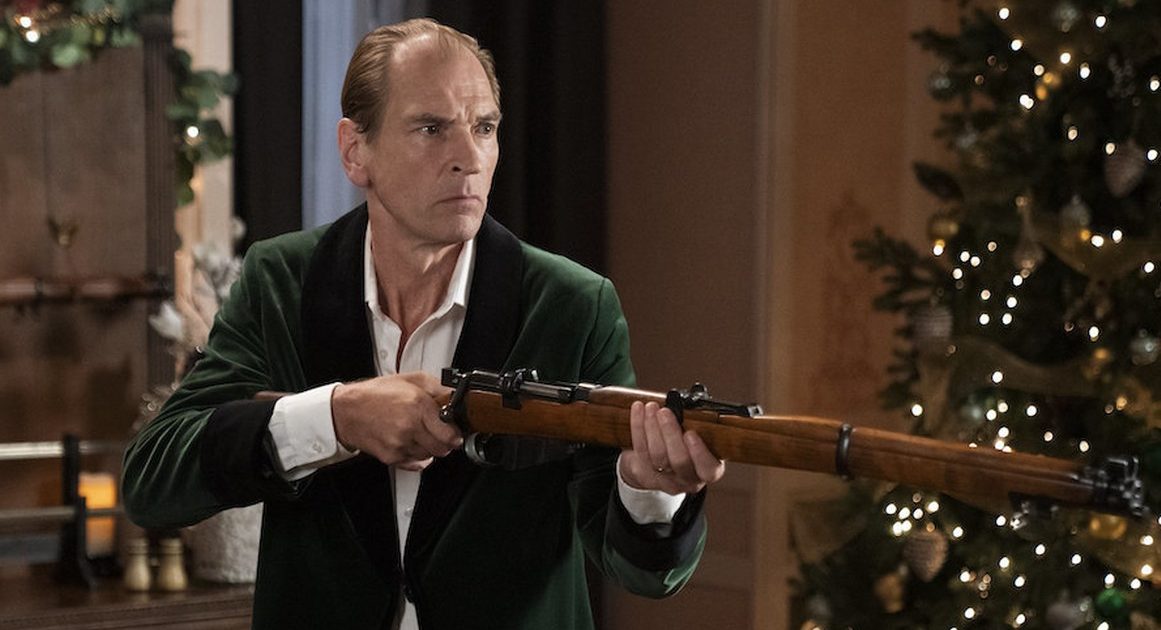 Into the Dark: A Nasty Piece of Work. Available now on Hulu.

From brain-boring Paul McCartney records to pyromaniac toys under the tree, Christmas has become a mistletoe-curdling trek through Hell. And television is one of the most malicious enablers. Hallmark has been spewing out  treacly Christmas rom-com swill since, I kid you not, October. (Though give TV a bit of credit for the glorious lost ending to It’s a Wonderful Life).

Luckily, we can always count on Hulu’s ferociously deviant Into the Dark anthology series to trash beloved American holidays. Thanksgiving, Mother’s Day, even International Women’s Day (think: empowered witches) have all been commemorated with grisly rituals and spectacular body counts on Into the Dark.

A Nasty Piece of Work, the show’s Christmas episode, is no exception. Imagine Ebenezer Scrooge wasn’t merely cheap and mean but aggressively sociopathic, and Bob Cratchit was asking for an extra lump of coal, and Scrooge said sure but only if Tiny Tim could be used as a skeet-shooting target and Mrs. Cratchit would perform an act of oral gratification that I certainly have never seen in any of the classic interpretations of A Christmas Carol.

Kyle Howard (Royal Pains) plays Ted, the Cratchit in this scenario, who for some years has been shouting “How high?” whenever his corporate boss Steven Essex (Julian Sands, 24) barks “Jump!” Or, in some cases, even before. “It’s not enough to accommodate his whimsical desires,” Ted complains to his wife Tatum (Angela Sarafyan, Westworld). “You have to anticipate his whimsical desires. … Everything is a test.”

Essex’s latest swindle of his employees was to cancel their Christmas bonuses to keep the company’s profit margins high. But to Ted, he dangles a bone: A new senior executive position is in the works. Maybe he’s the man for it. Can Ted and Tatum make it to a dinner party at Essex’s home that night to discuss it? But when they arrive, there’s no dinner party, just a drunken Who’s Afraid of Virginia Wolf?-style encounter with Essex, his cougarish wife Kiwi (Molly Hagan, Jane the Virgin), and one other couple: Ted’s sleek office rival Gavin (Dustin Milligan, Schitt’s Creek) and his fluffheadedly avaricious spouse Missy (“a trophy wife with a spectacular ass,” as Gavin describes her), played by Natalie Hall of Charmed.

The evening begins with a raft of traditional Christmas castration jokes and quickly moves on to thinking outside the box in the cover-up of murders. As the night unfolds, the Essexes don’t even try to disguise their purpose: to find out how far the other two couples will go to snatch that executive job and the money that goes with it. Sexual dalliance? Dismemberment? Assassination? Eugenocide? Part of the game may really concern which couple has the most finely-honed amoral ruthlessness for the corporate world. But it’s also clear that Steven and Kiwi have a set of sexual kinks that would have made Krafft-Ebing shudder.

There are times when A Nasty Piece of Work strains credulity—or would, if you managed to turn away from the devilishly delicious stew of rapacity, manipulativeness and malignity being cooked up by the talented cast. The show moves too quickly and too barbarously to spend much time thinking about it. And if you did, it would mostly be about turning Paul McCartney over to the ministrations of Steven and Kiwi every time he brays the word “wonderful.” Yes, Virginia, there is a Santa Claus, and what a wonderfully maleficent present he’s left under our tree.

PS: If you still need a break from Christmas cuteness even after watching A Nasty Piece of Work, I suggest hitting the discount DVD bins in search of the magnificently weird 1959 Mexican film Santa Claus, in which—among other things—Santa kills Satan by shooting him in the butt with a dart gun. Theology and the Second Amendment have never blended so well.