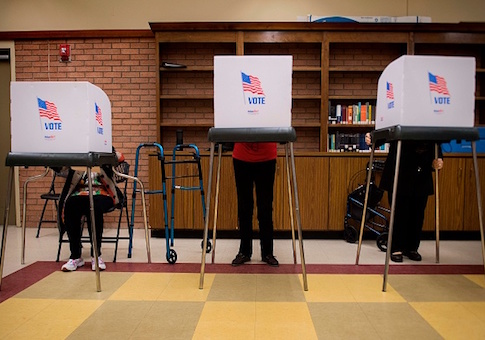 The city of Detroit has been hit with a lawsuit alleging numerous voter registration irregularities including thousands of dead people on its voter rolls, according to a complaint.

The Public Interest Legal Foundation (PILF), an Indiana-based group that litigates to protect election integrity, filed the complaint Wednesday to the United States District Court for the Eastern District of Michigan. Janice Winfrey, Detroit’s city clerk, and George Azzouz, Detroit’s director of elections, are named as defendants. The suit alleges that Detroit’s voter rolls contain more than 2,500 deceased individuals, nearly 5,000 voters who appear more than once, and 511,786 registered voters in the city where only 479,267 individuals are eligible to vote.

The lawsuit comes less than one year out from the 2020 elections in a state that President Donald Trump carried by just 10,704 votes over Hillary Clinton. Past reports showed voter machine irregularities in the city when 37 percent of its precincts in 2016 registered more votes than the number of voters tallied in polling stations. The city of Detroit was overwhelmingly carried by Clinton.

“If the Russians or others are indeed coming in 2020, this is how we fight back early. Election integrity requires that we review voting assets and intentionally seek opportunities to harden them,” Logan Churchwell, PILF’s communications director, told the Washington Free Beacon. “When the Foundation hand-delivered these list maintenance leads, they were brushed aside by Detroit. This behavior is precisely what saboteurs rely on before they begin their work.”

“When thousands of dead people are registered to vote and there are more people registered than are eligible to vote in the city of Detroit either someone is trying to commit fraud or there is gross incompetence within the Detroit city clerk’s office,” Cox said. “Either way Janice Winfrey has shown she is unable to do her job as Detroit city clerk. It’s time for Secretary of State Jocelyn Benson to replace her partisan friend on the Election Modernization Advisory Committee with someone who knows how to run a modern election operation.”

Winfrey and Detroit’s department of elections did not respond to requests for comment.

PILF has identified a number of voter roll irregularities across the country. In early November, the group released a report detailing 24,000 instances among the rolls in Palm Beach County, Fla., which included 225 instances of double voting by the same registrant in 2016 and 2018 across state lines, 20,479 double registrations across state lines, and 2,220 dead voters on the county’s rolls.

PILF has also filed suit against the Pennsylvania State Department, the North Carolina state board of elections, and Harris County, Texas, for withholding noncitizen voting records this year.