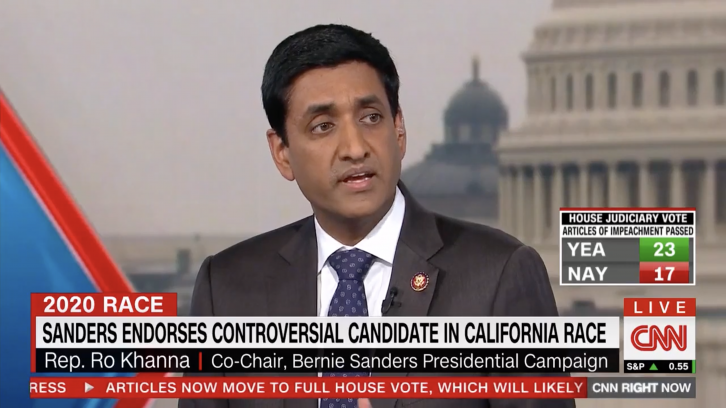 Rep. Ro Khanna (D., Calif.) said on Friday that Cenk Uygur “should be given a chance” in his race for a California congressional seat despite despite a record littered with offensive remarks about women.

“The important thing is for him to unequivocally, clearly condemn any of those past statements and say that they were wrong and that he has moved on and understood why they were wrong,” Khanna said. “I do think he has done that, and if people acknowledge their mistakes, acknowledge when they have said something that is offensive or hurtful, I do think they should be given a chance to still participate.”

Uygur apologized in 2017 for his offensive writings after he was ousted from the leadership of Justice Democrats, a far-left PAC he cofounded. The writings included his sexual expectations of the women he dated, and sentences like, “I’d much rather go out with a slut than a prude” and “If I haven’t felt your tits by then, things are not about to last much longer.”

Uygur excused the writing, saying he was “still a conservative who thought that stuff was politically incorrect and edgy.”

Khanna added that Sen. Bernie Sanders (I., Vt.) endorsed Uygur because of his support for far-left policy goals like Medicare for All, free public college, and reduced defense spending. Uygur is running for former representative Katie Hill’s seat after Hill resigned amidst allegations she had affairs with male and female staffers.

Uygur announced later on Friday that he would no longer be accepting endorsements, and Sanders retracted his endorsement.