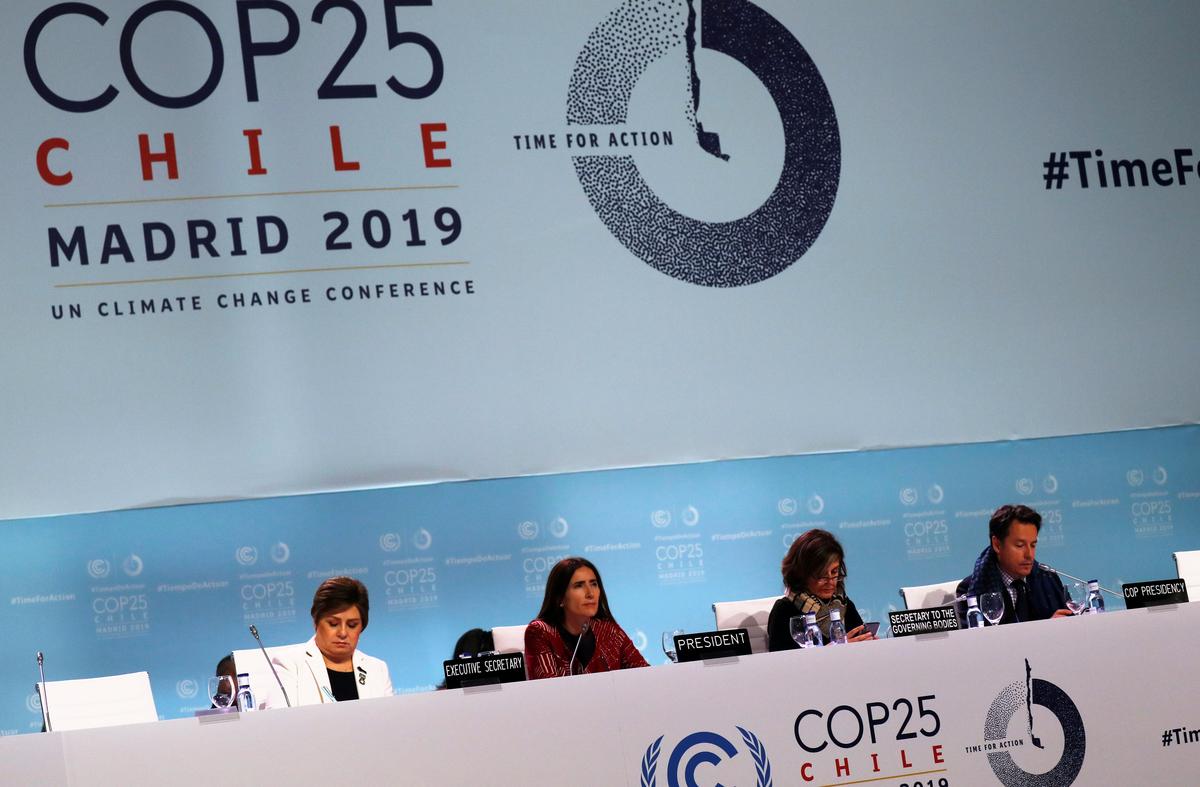 MADRID (Reuters) – Major economies resisted calls for bolder climate commitments as a U.N. summit in Madrid limped towards a delayed conclusion on Saturday, dimming hopes that nations will act in time to stop rising temperatures devastating people and the natural world.

With the two-week gathering spilling into the weekend, campaigners and many delegates slammed Chile, presiding over the talks, for drafting a summit text that they said risked throwing the 2015 Paris Agreement to tackle global warming into reverse.

“At a time when scientists are queuing up to warn about terrifying consequences if emissions keep rising, and school children are taking to the streets in their millions, what we have here in Madrid is a betrayal of people across the world,” said Mohamed Adow, director of Power Shift Africa, a climate and energy think-tank in Nairobi.

The annual climate marathon had been due to conclude on Friday, but dragged on with ministers mired in multiple disputes over implementing the Paris deal, which has so far failed to stem the upward march of global carbon emissions.

Long-time participants in the talks expressed outrage at the unwillingness of major polluters to show ambition commensurate with the gravity of the climate crisis, after a year of wildfires, cyclones, droughts and floods.

The European Union, small island states and many other nations had been calling for the Madrid decision to signal that the more than 190 countries participating in the Paris process will submit bolder pledges to cut emissions next year.

The agreement enters a crucial implementation phase in 2020, when countries are supposed to ratchet up their ambitions ahead of the next major round of talks in Glasgow.

If big economies such as China, India, Japan, Brazil, Australia and others fail to agree more meaningful climate action soon, then scientists say already slim hopes of averting catastrophic temperature rises will all but vanish.

Although no advanced economy is yet on track for the kind of action scientists say is needed to steer the climate onto a safer path, all the EU’s 28 member states, bar Poland, agreed in Brussels on Thursday to target net zero emissions by 2050.

Krista Mikkonen, Finland’s environment minister, speaking on behalf of the EU, told the talks it would be “impossible to leave” without agreeing a “strong message” on the need to redouble pledges to cut emissions next year.

Ministers broke into groups on Saturday for eleventh-hour negotiations on a tangle of issues, including finance for climate-vulnerable countries, carbon markets, and the all-important issue of the strength of the summit’s final text.

With the clock ticking, Andrés Landerretche, Chile’s summit coordinator, said the goal was to conclude on Saturday. “The vast majority of delegations are asking for a more ambitious text, and that’s what we’re aiming at,” he told reporters.

Campaigners had said a draft text circulating earlier was among the worst they had seen at climate negotiations.

“The approach Chile has taken on this text shows how it has listened to the polluters and not to the people,” said Jennifer Morgan, executive director of Greenpeace International.

The Paris process has been weakened by a move by U.S. President Donald Trump to begin withdrawing the world’s largest historical emitter from the agreement last month, making it easier for other big countries to backslide.